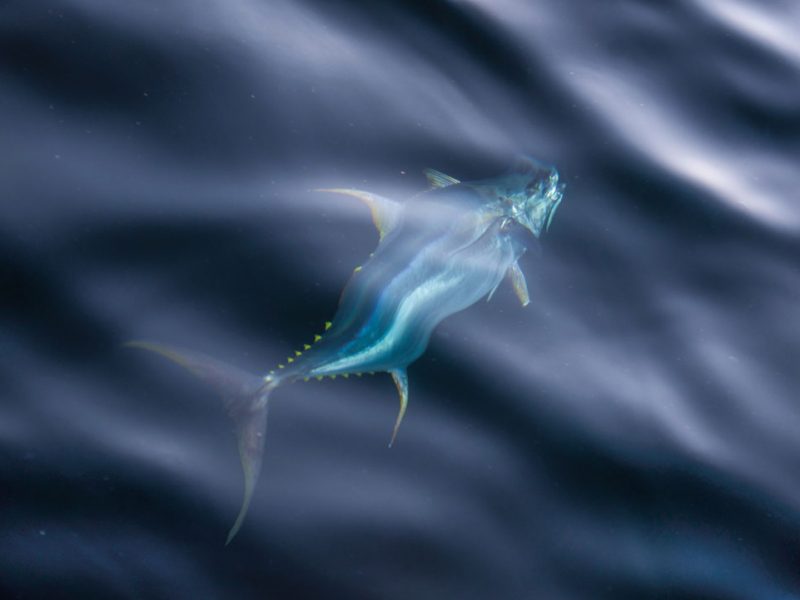 We had good conditions during the early part of the weekend followed by some windy days. The bay flounder, or fluke, have been biting, but it seems for most the feeding windows are short- lasting only an hour or so. Even though the window is brief, when they do bite it is great action. Striped bass were landed regularly from almost every beach along South Jersey and artificials, clam, and bunker baits have been the most successful. The sea bass action continued with many boats reported solid limits even with the new size regulations. I did receive quite a few reports of bluefin tuna from the usual midshore spots and yellowfin being landed from the southern canyons. If the weather stays tame, we are looking to have a fantastic June for beach, inshore, and offshore fisherman.

Hook House Bait & Tackle in Toms River had great reports off Island Beach State Park with good sized drum and striped bass being caught. Some of the drum were caught on sand fleas.  Anglers working south near Barnegat inlet also found some bluefish on thin metals. Flounder has been decent in parts of the bay on jigs and Gulp with a few weighed in to 5.5 pounds.

Lacey Marine in Forked River had reports of fluke being landed from the “BB” to “BI” buoys on minnows and Gulp. The fluke fishing has been hot and cold, as you just have to be out there at the right time. Sea bass continues to be very good for anglers working the wrecks 20 to 30 miles out and there has been some bluefin landed from the Mud hole.

Jerzey Buoyz Sportfishing reported good sea bass trips as the skipper has been running to offshore wrecks to find good numbers of keepers. Some of the trips limited on sea bass and ended the trips fluking. The crew has some openings remaining for sea bass.


Creekside Outfitters in Waretown received good reports of crabbing and blowfish in the western parts of the bay.  Fluke fishing was good with some nice fish weighed in recently and anglers have been fishing a variety of areas. Double creek channel and the stretches from the “BB” to “BI” were the hotspots of the past week. There have been several drum caught from the beaches of Long Beach Island on clam and sand crab.

Reel Reaction Sportfishing out of Waretown had a busy week with charters averaging 4 to 5 keepers with 25 throwbacks per 4hr trip. The skipper took the weekend to fish a fluke tournament with the S&S Bucktail team and the team swept all fluke categories of the “Raging Raymond” tournament in Little Egg.

The Super Chic out of Barnegat Light reported good sea bassing and continued their onslaught of full boat limits. The skipper has been fishing some deeper wrecks and will continue until the sea bass season closes. The boat also has some bookings for striped bass as there has been quite a few around.

Tony’s Bait & Tackle in Manahawkin received excellent reports of solid flounder action from the clam stakes off of Tuckerton. Anglers working floating jig heads tipped with minnows and Gulp have been doing the best on the keeper front. Barnegat Inlet had some nice schoolie striped bass action with a few bluefish mixed in. Anglers working the deeper wrecks had limits of sea bass being caught.

Tackle Direct in Egg Harbor City reported solid flounder fishing in Great Bay this past week as the 6 to 15 foot depths have been the best spots for keepers. Striped bass continue to be landed on the surf from Long Beach Island to Ocean City and there are some monster bluefish mixed in. The area had a good push of drum this year with quite a few being caught from the beaches.  The offshore scene has some bluefin at the midshore lumps and humps and there have been spotty reports of yellowfin in the southern canyons.

Tight Lines Bait & Tackle in Somers Point had excellent reports of bluefish and striped bass being landed off the beaches. Clam, bunker, and artificials have been working with equal success for anglers hitting the Ocean City surf.  Flounder fishing in the backwaters was spotty this past week and anglers reported the best success coming from the 10 to 20 foot areas. The offshore bite has definitely begun with boats taking long runs to find yellowfin, mahi, and deep drops for tilefish.

Badfish Charters in Ocean City has been working the backwaters for shallow striped bass and some of the skippers favorite cuts for flounder.  The crew was on the water nearly everyday this past week working striped bass, bluefish, and flounder.

The Cape May and Wildwood areas continued to have solid reports of striped bass from the area beaches on clams and bunker. Drum have been hitting with consistency from the beaches and boats on big clam baits. Anglers hitting the offshore wrecks have been finding quick boat limits of sea bass. There have been quite a few short flounder around and anglers working the deeper holes in the back are finding a good number of keepers. With good sea conditions, boats made it out for some offshore trips and reported good action on yellowfin and mahi along some of the southern canyons.

The best bet for the weekend will be to hit those offshore wrecks for sea bass as the most up to date forecast looks like pancake flat seas. Let’s hope it doesn’t change. Two-hook rigs tipped with clam have been adequate for catching keepers, but some of the bigger ones are coming from jigs.  Flounder fishing is another good bet for this weekend with good tides in the bay and some of our southern locations may be warm enough to begin hitting the inshore reef sites. Anglers working jigs or bucktails tipped with (legal) fluke belly, Gulp, or bluefish strips should have the best shots at larger fish. Another good option may be to hit the offshore canyons as the yellowfin bite has begun.  Good luck, be safe and tight lines!