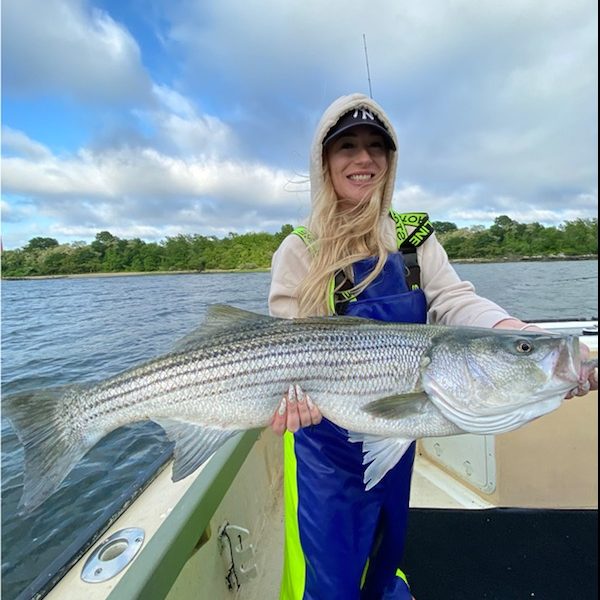 (Above) One of many big Narragansett Bay bass for Newport Sportfishing Charters this week.

The Frances Fleet in Point Judith is seeing continued success on the cod grounds, especially with the weather continuing to get better each week. Both the full and half day trips have been seeing some limit catches, with some bigger fish coming over the rails this week. As is usually the case with fluke, results vary from day to day, but the bite is getting more consistent each day. Be sure to call the office or check their website to reserve your spot for a full or half day trip.


Captain Kelly, at C-Devil II Sportfishing was happy to report that this May was probably the best one he has had in a decade. Things have only improved as the calendar turned to June, with easy limits of slot bass, and loads of 40-pound class fish that were released. The bass have not gotten finicky yet either, so they’ve been able to catch them on the troll, jigs, worms, artificials; it really doesn’t seem to matter. A better push of bluefish has shown up as well and have been crushing topwater plugs. After loading up on bass all morning, they have been transitioning to deeper water fluking later in the day. The fluke bite is slowly improving with fish to 20-inches this week, and there are loads of sea bass for the upcoming opener. Be sure to visit the calendar on their website before it’s too late to book!

Dustin, at Rhode Island Kayak Fishing Adventures told me the bite remains hot across Southern New England. The striped bass fishing remains consistent as ever, and a nice push of larger fish have joined the party over the past few days across Rhode Island. The usual go-to artificials, along with live bait are producing fish from 20-inches to 40-pounds, with plenty of slot fish in the mix. Bluefish are everywhere and are willing to tear up just about any offering you throw at them. Black sea bass action has been good in CT and MA, which portends well for the Rhode Island opener in just over a week. The fluke fishing is getting a bit more consistent each day, while the scup bite has fired up across the state. Anglers working the freshwater are still reporting solid largemouth action on both shallow and deeper pieces of structure. Dustin’s schedule is filling up quicky, so be sure to check out www.rikfa.com to book ASAP.

Dave at Ocean State Tackle in Providence reports that the striped bass bite is still the main show in town, with the northern portions of the Providence River and the southern portions of the Seekonk River taking the mantle as two of the hotter spots this week. Fresh pogies remain irresistible for these bass, but plenty of fish are still coming on large topwater plugs, and various soft plastics. Better numbers of bass have also started to push through South County, and surfcasters drifting plugs are starting to report solid catches around the breachways and beaches. Black sea bass are starting to show up in good numbers, unfortunately the season hasn’t opened yet, but some better fluke catches are coming around the squid schools in the bay and across the South County beaches. The scup fishing is starting to get to a summer level of consistency throughout the bay and on the rocks and reefs out front. Dave will be open at 5 AM on the weekdays, 430 AM on the weekends, and will be closing at 7 PM each night.

Rick, at Priority Charters reports that the striped bass bite continues to be lights out across the state, with plenty of fish from true cows to schoolies and everything in between. Solid reports have come in from Block Island, Point Judith, the Newport coast, and up in Narragansett Bay. Out at Block Island, trolling umbrella rigs or working jigs in the rips has been the top producer, while live bunker and casting spoons has been the ticket for anglers fishing closer to home. Rick hasn’t made any cod trips recently, as the dogfish have started to invade the grounds, but he should pick it back up later in the summer. Fluke fishing has been relatively slow in terms of numbers, but the guys who are putting time in are getting rewarded with some big early season fish. Sea bass action will be great as soon as the season opens, and while the offshore reports have been quiet, Rick anticipates that blowing open very soon.

Captain Rob, at Newport Sportfishing Charters has continued to find no shortage of big striped bass this week, with consistent catches to 40-pounds throughout the mid/upper Bay. A heavy push of gator bluefish has entered the mid-bay, so there’s certainly no shortage of action out there. The bass/bluefish action has been so good that Rob hasn’t broken away to try fluking, but he did say there’s plenty of bait, and he’s been hearing of a few reports of big flatfish.

Striped bass continue to pile into Southern New England, providing ample opportunities for anglers across Rhode Island and Connecticut. Striped bass of mixed sizes can be targeted across Rhode Island, with steady action in and around the Bay, with the Bay producing an enormous number of big fish without having to travel too far. Gator bluefish can also be found spread out in the same areas, and while the bonus weakfish bite has slowed a bit, they are still popping up with some regularity around the Bay. The South County beaches and breachways are also starting to wake up, and has surfcasters dusting off the waders/korkers. Bottom anglers are finding some improved fluke action around the Island, and we should be seeing the South County beaches start to wake up any day now. Connecticut anglers can continue to take advantage of steady bass and bluefish action in and around the tidal rivers, including a recent push of big, migratory bass in central/eastern CT. Fluke fishing seems to be better to the west than the east, but it seems you can find good ones anywhere in the state if you get the right conditions; while the sea bass season has opened and early results are strong on the deeper reefs, rockpiles, and wrecks.