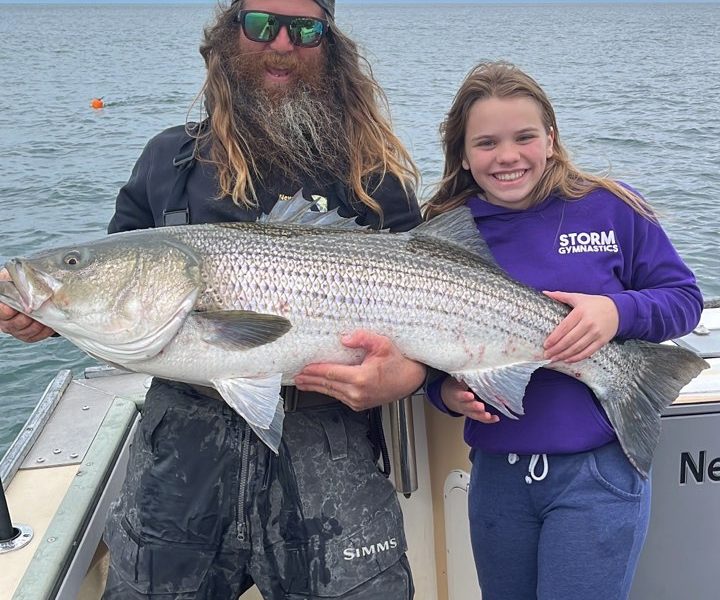 (Above) Captain Rob of Newport Sportfishing Charters with a bass of a lifetime for this young customer.

The Frances Fleet in Point Judith has seen some up and down fishing this week due to some less-than-ideal wind/drift conditions, but they have been able to put some quality trips together on most trips. The water had dirtied up over the weekend but has started to rebound over the past few days. The addition of sea bass has been great, with easy boat limits on most trips, along with plenty of quality fluke still coming over the rails. Be sure to call the office or check their website to reserve your spot for a full or half day trip.


Connor, at Tall Tailz Charters has seen more of the same red-hot fishing over the past week. They’re managing steady catches of bass from 20-40-pounds, along with an increased number of slot fish for those looking to fill the cooler. The bay is still producing consistently, but the south facing reefs and rockpiles are producing much better, so it’s easy to get away from the crowds and find some fish. The bottom fishing took a turn for the better this week, with steady catches of sea bass since the opener, along with some better fluke results in 30-50 feet of water. The fishing should only improve from here, especially with the upcoming new moon, get a spot aboard Tall Tailz before it’s too late!

Dustin, at Rhode Island Kayak Fishing Adventures told me the remains hot across Southern New England. The striped bass fishing remains consistent as ever, and a nice push of larger fish have joined the party over the past few days across Rhode Island. The usual go-to artificials, along with live bait are producing fish from 20-inches to 40-pounds, with plenty of slot fish in the mix. Bluefish are everywhere and are willing to tear up just about any offering you throw at them. Fluke action remains decent enough to put together some decent catches, while the sea bass season has fired right up, and the scup bite is getting better by the day. Freshwater anglers are reporting good largemouth bass results, although a finesse presentation or bouncing a topwater frog has been required. Dustin’s schedule is filling up quicky, so be sure to check out www.rikfa.com to book a shore or kayak trip ASAP.

Cheri, at C-Devil II Sportfishing reports that the striped bass bite continues to impress, with several fish in the 40-50-pound range coming over the rail this week. They have also been finding easy limits of slot fish, and while most of the fish are coming on jigs, the bass haven’t been picky and will eat a variety of offerings. Bluefish are still plentiful and remain on the large side, with a few weighing in close to the 20-pound mark. The fluking has started to improve around the island and the C-Devil managed some full coolers of doormats this week. The charter sea bass season is open, they are abundant, and they also aren’t too picky about the bait. They are making their first offshore trip of the season today, with the weather finally cooperating enough to go hunt some bluefin. Be sure to check their live booking calendar while there are still some openings.

Jay, at Pamela May Charters has continued to find plenty of great stripers close to home in the bay, if you can get away from the gator bluefish that are always willing to rip up your tackle. The bluefish tend to be hanging tight to the bunker schools, while the bigger bass are on the outskirts of the schools and around the channels. Bass in the 40+ pound range have been common, and there has been no shortage of slot fish for the cooler. The bunker has been easy to find, and the bass are responding to live-lined or trolled fresh bait. Block Island continues to hold a nice slug of fish as well, with more cows mixing in with the slot fish on each trip. While the bluefish continue to move around, they remain plentiful, and you’re likely to find them mix around the island and along the South County beaches as well. Fluking has been much better around the island than inshore, but is showing signs of improving across the board, while the scup and sea bass will help you fill a cooler on even the toughest days.

Dave at Ocean State Tackle in Providence has been happy to report that things have continued to go strong in his neck of the woods, adding that it’s probably the best early season striper and weakfish bite he has seen in 21 years. There continues to be quality bass in the upper reaches of the Seekonk River, while anglers fishing out front are reporting big bass from South County to Block Island. Bluefish also remain scattered throughout the area, and you’ll likely run into them just about anywhere if you’re out there enough. The black sea bass action has remained steady, while the fluke fishing has remained relatively consistent on the better weather/drift condition days. The scup fishing is starting to get to a summer level of consistency throughout the bay and on the rocks and reefs out front. Dave will be open at 5 AM on the weekdays, 430 AM on the weekends, and will be closing at 7 PM each night.

Captain Rob, at Newport Sportfishing Charters has continued pound large striped bass throughout the area this week, including 3 fish over 50-pounds. Whether you stay close to home in the Bay, head out to Block Island, or hit some of the structure in between, you are likely to find some hungry bass that are willing to play. Gator bluefish also remain scattered throughout the area as well, so there’s certainly no shortage of action out there. Rob has continued to mainly target bass, but word from the fluking grounds has been solid when the water is clean enough, and there is no shortage of scup and sea bass.

Striped bass continue to pile into Southern New England, providing ample opportunities for anglers across Rhode Island and Connecticut. The trend for this week has not only been another week of consistency, but also a massive increase in overall size across the board. Despite some great fishing, 40-50-pound fish have been a bit rare, but that all changed 10-fold this week. Striped bass of mixed sizes can be targeted across Rhode Island, with steady action in and around the Bay, along with a nice push of big fish around the island. Anglers working the reefs and beaches from Newport to Westerly have also seen a pronounced uptick in activity this week, and you are also likely to find some gator bluefish at any of the aforementioned spots.

Bottom anglers are finding some improved fluke action around the Island, and we should be seeing the South County beaches start to wake up any day now. The sea bass opener for the charter boats has provided ample opportunity to fill the coolers if the fluke aren’t cooperating, and the scup action is increasing greatly with the rise in water temperatures. Connecticut anglers are also experiencing plenty of consistency, with tremendous fishing in the tidal rivers, along with a similar increase in average size of fish caught. Better numbers of better fish have also started to work their way to the reefs, so you don’t need to be married to the river when the boat traffic gets bad. Fluke fishing seems to be better to the west than the east, but it seems you can find good ones anywhere in the state if you get the right conditions; while the sea bass season has opened and early results are strong on the deeper reefs, rockpiles, and wrecks. Scup action has intensified greatly on the nearshore reefs, and this weekend’s warm spell should help make them plentiful for shore bound anglers.