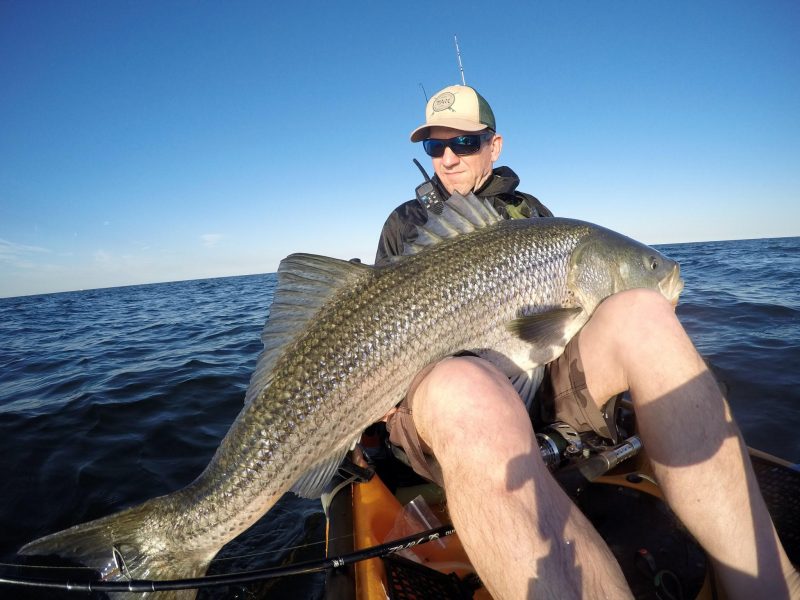 (Above) Giglio’s Bait and Tackle regular Jon I. with a monster bass he caught from his kayak off Long Branch on a Ben Parker flutter spoon earlier this week.

Monster stripers, limit sea bass catches and even a cobia off the beach were the highlights of the past week. There’s solid fluking in the rivers and bays while the ocean bite continues to improve as warmer water gets them chewing.

There were also better reports on tuna fishing as the canyons saw more yellowfin caught along with mahi-mahi.

As always, it’s a good weekend to go fishing.

Rick Hebert at Tackle World in Rochelle Park said the sea bass fishing on the reefs and rocks is holding up nicely as the spring season is winding down. The fishery closes on June 19. He’s been getting better reports on fluking, especially in the Shrewsbury and Navesink rivers and there are still stripers in the back of Raritan Bay. Freshwater anglers did well with hybrid stripers this past week at Lake Hopatcong throwing black spooks at night.

Capt. Phil Sciortino at the Tackle Box in Hazlet said folks trolling live eels with planer boards off the Monmouth County beaches continue to catch monster bass up to 50 pounds.  He also reported a bluefish blitz at North Beach on Sandy Hook and some big fluke caught in the Navesink River. There was a 9 pounder and two 8 pounders.

Mike Pinto at Giglio’s Bait and Tackle in Sea Bright said the fluke bite in the surf is still a slow pick but it is getting better. There are scattered blues off the beach as well and the stripers are hitting small plugs and sand bugs. Much bigger bass continue to bite off the beach for boats trolling Mojos and anglers tossing metal-lipped swimmers. Striper fishing in the Navesink and Shrewsbury rivers has quieted down but the fluking is picking up on Gulp and bucktails.


Mike Gleason at TAK Waterman in Long Branch also mentioned the big stripers for boaters off the beaches. If you’re after keeper bass, the place to look is back in Raritan Bay. The beach bite for fluke continues to get better, he said, with a few more keepers caught in the surf last week. The canyons are giving up most of the tuna as the inshore bite has yet to get started, although there have been some sightings. Surprisingly, Gleason did say there are false albacore around. Stripers are hitting clams and sand bugs in the surf from Asbury Park through Sea Girt. Most of the fish are schoolie size but there are some keepers to be had.

Bob Matthews at Fisherman’s Den in Belmar said the fluking has been good in the Shark River for the rental boats with fish up to 4 pounds. The sea bass fishing for the boats out of the marina has been fantastic, he added, and he’s also had good reports of stripers in the surf. Spoons and live eels are getting the bigger bass off Long Branch. All of the stripers, he said, have been too big to keep.

Capt. Pete Sykes of Parker Pete’s Sportfishing out of Belmar said his charters have been getting in on the trophy bass on the small boat while anglers are getting their limit of sea bass on the bigger Express. He’s got a few open boat sea bass trips left, including one on the final day of the season, Father’s Day, June 19.

Capt. Jay Richardella on Side Job Charters out of Belmar has been on the stripers and sea bass as well and will now be turning his attention to tuna. The bite is now going off in the canyons and the inshore action should be picking up soon.

Capt. Steve Spinelli on the Skylarker out of Belmar said they’ve been doing well with black sea bass getting boats limits on most trips. There are also ling among the sea bass. Capt. Spinelli has been getting in on the stripers as well.

Jake Palmieri at The Reel Seat in Brielle reported bluefin and yellowfin in the canyons along with some mahi-mahi, especially to the south. Fluking has been good in the Manasquan River and back through Barnegat Bay while the Shrewsbury Rocks is holding big stripers.

Chris Parlow at Capt. Bill’s Landing in Point Pleasant Beach reported that the yellowfin bite blew open in the Hudson and Toms canyons last weekend with some big mahi-mahi in the mix. Sea bass fishing remained very good at a number of the inshore locations, he added, and fluke are starting to hit on the local reefs as water temperatures continue to rise.

Capt. Kenny Namowitz on the Mimi VI out of Point Pleasant Beach said the sea bass just keep on biting and that is making for happy anglers. There’s plenty of fish around and limits are common. More ling are showing up as well along with some winter flounder. Capt. Namowitz has posted new open boat dates on his website fishing for fluke on July 7 and cod, pollock and ling on June 20 and July 4.

Capt. Danny Gregory on the Norma K III out of Point Pleasant Beach said more keeper fluke are coming over the rail as the water continues to warm. He recorded temps up to 65 degrees over the weekend. There were sea bass and ling mixed in with the fluke. The Norma K sails twice daily for summer flounder.

Frank Giacalone at Gabriel Tackle Co. in Brick said the local wrecks and reefs are producing plenty of sea bass with most anglers limiting out. Barnegat Bay is the better bet for fluke as the ocean has yet to offer a consistent bite.  Currently, the south end of the bay has the bigger fish.

Pete Kupper at Charlie’s Bait and Tackle in Normandy Beach said there are more fish around than people to catch them. There are bass, blues and fluke in the surf and Barnegat Bay. The bass are in the lagoons and the fluke are in the Manasquan River and back to the Mantoloking Bridge. He also reported crabs are starting to show up in the traps in the bay.

Jenni Ackerman at Grumpy’s Bait and Tackle in Seaside Park said a strong southeast breeze slowed up the clam bite for stripers in the surf there, but some healthy stripers were still being caught. Anglers are picking up a few black drum as well. The surprise catch of the week was a 26-pound cobia caught by Jeff Bajek from the sand. The fish hit a bunker chunk. Ackerman also reported bluefish are hitting topwater plugs thrown from the sand and more fluke are showing in the surf.

There’s a little more than a week left in the current sea bass season so if these tasty fish are on your to-do list, it’s time to go. Limit catches on the reefs and rock piles are pretty much the norm.

Surf fishing has been picking up with stripers, blues and fluke in the mix. Plugs, clams and sand bugs have been working for the bass, mullet and top-water lures for the blues and Gulp and bucktails for the fluke.

The better fluke fishing is still in the rivers and bays.