Matt, at Black Hall Outfitters in Westbrook told me that the beat continues across Central/Eastern CT, with the Connecticut River holding big numbers of striped bass. There are some true giants starting to show up, along with loads of fish around slot-size. The plentiful bunker schools can often be seen being harassed around dawn and dusk, which is when you may be able to fool a big fish on a topwater offering. The bunker remains easy enough to find that you can net/snag plenty of fresh offerings when the bass start to get finicky. The reefs out front are also starting to hold a few big fish that have been falling for topwaters and live eels. The fluke action has been decent in 30-50 feet of water on white and chartreuse bucktails tipped with Gulp, while the sea bass action has been steady on slow pitch jigs. 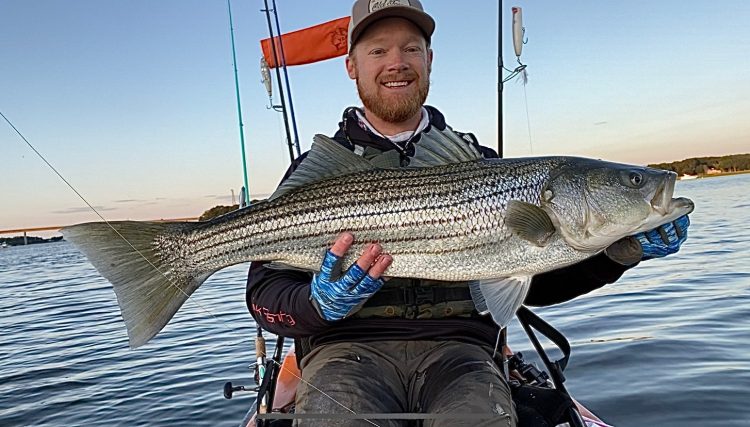 Heather from Black Hawk Sportfishing reported that they had another busy and successful week on the water. The porgy trips are as consistent as ever, with plenty of scup on the full boat trips and on the private charters. Last Wednesday’s private charter was one of the best of the year, with a good mix of porgies, stripers, and bluefish. The night trips have also been great, with full boat limits of slot bass, along with many larger bass pushing 40-pounds. The fluke trips have started to show more consistency, but it remains highly dependent on drift conditions. They’re still running two trips on Saturdays and Sundays at 5 AM and 1 PM and are now sailing every weekday. They are also starting to post their family trips, which are shorter, limited passenger trips that tend to be very popular. Be sure to check their website for updated scheduling and reservations for any of their wide array of trips!


Dan, at Daniel’s Bait, Tackle, and Charters in New London, reports that the fishing continues to improve across eastern CT. Some large masses of smaller bait have invaded the area, and some quality striped bass can be found pushing the bait along the beaches around dawn and dusk. Swimbaits, soft plastics, topwaters, and sandworms have all been producing; while live bunker is pure gold if you can locate some. Anglers fishing after dark have also seen some large bass taking live eels on the near shore reefs this week. Reports from anglers fishing to the west have also reported increased striped bass catches on most of the good structure from the mouth of the Housatonic to the Connecticut River scup action has been slowly improving close to home, and we should see some better reports of shore catches with the upcoming weekend heatwave. Sea bass and fluke action has picked up a bit in local waters as well, especially around Fishers and not too far from the Race.

Joe, at Diorio Guide Service told me that the fishing was outstanding this past week, with a great combination of numbers and size on the striped bass grounds. Joe managed multiple fish in the 30- to 40-pound range, along with a true cow that tipped the scales at 54-pounds. Finding fresh bunker has been key, as most fish have come on fresh livelined offerings. The topwater bite has been up and down, due to some heavy current and heavy boat traffic, but you can still find some nice fish on Docs, Dannys, and soft plastics on the right days. The river has been as steady as ever, but the bass are also starting to transition to the reefs, which provides a nice option if you’re trying to avoid some of the boat traffic.

Mike Roy at Reel Cast Charters is still finding a solid bass bite in the river, especially if you can locate the bait, but they remain a bit finicky, so the dawn/dusk hours are best. The reefs have started to see some better, sea lice covered bass; while the deeper reefs and rips are holding big numbers of slot fish that are willing to eat a diamond jig. Give Mike a call asap to book a trip while he still has some openings!

Chris, at Elser Guide Service has had to deal with some choppy conditions this week, but in terms of fishing not much has changed. If you can find the bunker schools, you will almost certainly be rewarded with some nice fish. Big bass and bluefish can be found blitzing on the bunker schools on the calmer days, while targeting well known pieces of bait-holding structure has been the ticket on the rougher days. Drift conditions were a bit tough for fluke over the past few days, but there is plenty of small bait in the area as well, so reports should intensify as the water cleans up.

Fisherman’s World in Norwalk reports that the striped bass fishing in the area shows no signs of slowing down. The best action has been around the bunker schools, which remain abundant throughout the Western Sound. The nighttime chunk bite is also starting to set up right on schedule, with most anglers reporting steady action of bass from slot-class to 40-pounds. Mojos, bunker spoons, and flutter spoons remain the best bet in terms of artificials in most of the local hotspots. There are also big schools of big bluefish patrolling the bunker schools and can be caught on a variety of offerings. There are also plenty of bass and bluefish working the areas around the Islands, feeding on both bunker and smaller bait. Fluking has slowed a bit but pounding structure in 40-50 feet of water remains the ticket when the weather cooperates. The scup fishing has picked up the slack this week, and will only improve, with both shore and boat anglers scoring plenty of keepers on worms and clams. The sea bass are also starting to settle in, with very good reports from the deeper wrecks, and solid reports from most other structure in 30+ feet of water.

Striped bass continue to pile into Southern New England, providing ample opportunities for anglers across Rhode Island and Connecticut. The trend for this week has not only been another week of consistency, but also a massive increase in overall size across the board. Despite some great fishing, 40- to 50-pound fish have been a bit rare, but that all changed 10-fold this week. Striped bass of mixed sizes can be targeted across Rhode Island, with steady action in and around the Bay, along with a nice push of big fish around the island. Anglers working the reefs and beaches from Newport to Westerly have also seen a pronounced uptick in activity this week, and you are also likely to find some gator bluefish at any of the aforementioned spots.

Bottom anglers are finding some improved fluke action around the Island, and we should be seeing the South County beaches start to wake up any day now. The sea bass opener for the charter boats has provided ample opportunity to fill the coolers if the fluke aren’t cooperating, and the scup action is increasing greatly with the rise in water temperatures. Connecticut anglers are also experiencing plenty of consistency, with tremendous fishing in the tidal rivers, along with a similar increase in average size of fish caught. Better numbers of better fish have also started to work their way to the reefs, so you don’t need to be married to the river when the boat traffic gets bad. Fluke fishing seems to be better to the west than the east, but it seems you can find good ones anywhere in the state if you get the right conditions; while the sea bass season has opened and early results are strong on the deeper reefs, rockpiles, and wrecks. Scup action has intensified greatly on the nearshore reefs, and this weekend’s warm spell should help make them plentiful for shore bound anglers.