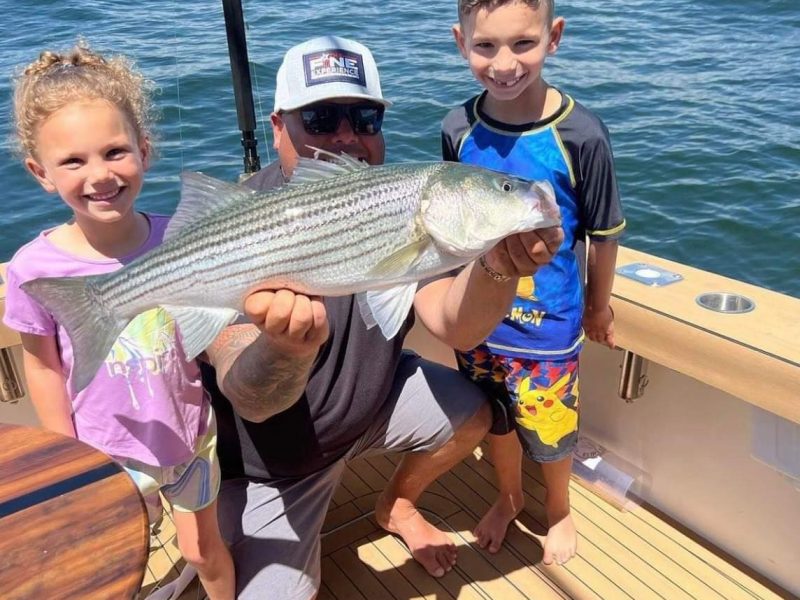 (Above) Eight-year-old Mike Rizzo with his first keeper striper!

Matt, at Black Hall Outfitters in Westbrook told me that the beat has rolled on from last week across eastern/central CT. The gator bluefish are still around, although they have started to spread out a bit more. The striped bass bite in the lower river has been steady, with fish to 35-inches or so taking twitch baits, topwaters, and soft plastics. There’s bunker in the river, but it remains relatively thin, so anglers have started moving to live eels to fool some bigger bass. Anglers that are targeting sea bass are finding some decent fish in deeper water, roughly 50 to 80 feet, along with a few keeper fluke in the same areas.

Heather from Black Hawk Sportfishing reported that they have been getting out whenever possible and the results have been solid on the scup grounds. Good numbers of jumbo scup have been coming over the rails on the full boat and private charter trips, along with some nice weakfish, which has been a great bonus. Their first After Work Special trip of the season produced good numbers of keeper bass, along with some larger fish that were released. They will continue to add these trips to their schedule, and they fill up fast, so be sure to book one soon! They will be adding more bass/bluefish day trips and are also running two trips daily on the weekend. Be sure to check out their website/Facebook for updated scheduling and reservations.

Dan, at Daniel’s Bait, Tackle, and Charters in New London, reports that the early season bite has remained steady across the state. Holdover striped bass in the Thames estuaries are getting aggressive, with fish to 36+ inches being taken consistently on soft plastics, especially if they are tipped with a strip of bait. Anglers heading to the western Sound are starting to report plentiful bunker and much larger bass, which should both be filtering east very soon. Shore anglers are taking catching well on the dusk tides with bait and plugs, while boat anglers are having luck trolling tubes, as well as drifting with sandworms or bunker. Dan is stocked with all of your local fishing needs and will be getting consistent sandworm deliveries for the upcoming weeks!


Joe, at Diorio Guide Service told me that the fishing has been on fire for his early season trips, with steady striper fishing, along with big numbers of gator bluefish. He has been getting most of his fish on topwater offerings, such as the 9-inch Doc, Cotton Cordell Pencils, and weightless soft plastics. Each trip is also seeing more bunker in the area as well, so livelining is…and will continue to be a great way to fool some larger bass. Joe still has some dates available for June, so be sure to book soon before it’s too late!

Mike Roy at Reel Cast Charters has seen the bite improve over this new moon period. As is usually the case in the Spring, the fish have been finicky, but you can generally fool them with small soft plastics. Larger topwater offerings and swimming plugs are also starting to fool some fish on the right days. Big numbers of school bass have been common, and most trips are seeing plenty of slot fish in the mix as well. This week has seen a nice influx of bluefish, which is usually a sign that the late spring action is about to blow up. The bunker schools are still thin in the lower river, but they should thicken up soon, which will undoubtedly bring some larger bass to the area. Be sure to contact Mike for an early season trip before it’s too late!

Chris, at Elser Guide Service is still finding some good fishing, with the best action coming around deeper water. They had stripers to 46-inches this week while casting topwater plugs or livelining bait, along with some tenacious gator bluefish. The Doc and the Game On X-Walk have been top producers, with small soft plastics like the Duratech producing well when the fish become finicky. Black sea bass and fluke fishing has been slow in the Western Sound, but there has been a large push of sandeels recently that should help things out.

Fisherman’s World in Norwalk reports that the fluke fishing has really started to get going out west over the past week or so. Solid reports have been coming from the Cans 24 and 26 area in 30-40 feet of water, with M3 Tackle spoons tipped with squid being a top producer. While the uptick in fluke action has been a welcomed change, the red-hot striped bass action has still been the main draw in town. Anglers trolling mojos have found fish all the way to the mid-50-pound class, along with very strong numbers of 25-plus-pound bass. The usual hotspots from 11B to the OB and to 28C are producing consistent catches on the troll, while the nighttime chunk bite is also starting to heat up closer to home. Some larger schools of bunker have shown up around the islands and beaches and have brought some better bass and gator bluefish along with them. The area inside the islands is also producing some consistent weakfish catches on pink bucktails, soft plastics, and sandworms. Sea bass anglers are also reporting some consistency on the wrecks and rockpiles in 30- to 40-feet of water.

Striped bass continue to pile into Southern New England, providing ample opportunities for anglers across Rhode Island and Connecticut. Striped bass of mixed sizes can be targeted across Rhode Island, with steady action in and around the Bay, along with some red-hot early season action at Block Island. Gator bluefish can also be found spread out in the same areas, and while the bonus weakfish bite has slowed a bit, they are still popping up with some regularity around the Bay. Bottom anglers are finding some improved fluke action around the Island, and we should be seeing the South County beaches start to wake up any day now. Connecticut anglers can continue to take advantage of steady bass and bluefish action in and around the tidal rivers, along with a push of bunker and larger bass to the west that should be filtering through the state more and more each day. Fluke fishing seems to be better to the west than the east, but they can likely be found across the Sound, while the sea bass season has opened and early results are strong on the deeper reefs, rockpiles, and wrecks.