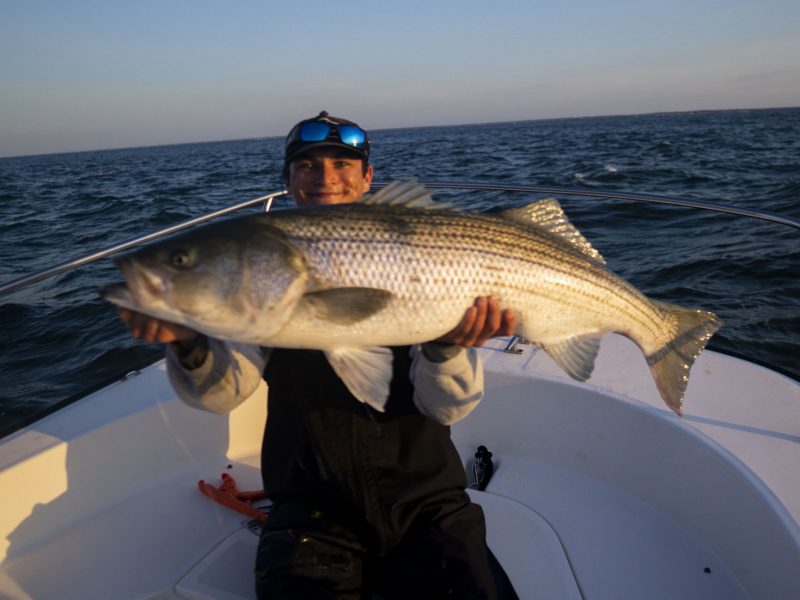 (Above) OTW’s Jack Burke hoists a 30-pound striper he caught earlier this week.

Admittedly, I have not been fishing as much as I would have liked to this past week. I moved in to a new place, which displaced all of my fishing gear; but, I suppose this is a good excuse to reorganize everything. The trunk of my car had become a littered mess of plugs, loose trebles and a blanket of half-empty (or half full, if you’re an optimist) Gulp packages. My goal this summer is to keep my fishing tackle orderly in hopes that it will somehow increase my likelihood of reaching another goal: catching a 30+ pound bass from the surf.


My heaviest bass from the “surf” came on a white Yo-Zuri hydro minnow in an undisclosed location around a river mouth on Long Island. It was a near 40-incher, but I didn’t actually measure her, nor did I take pictures. I was anxious and alone, and never in my life had I been more concerned with releasing a fish. I only got a weight on my 30-pound Boga as I removed the hooks, which showed just over 25-pounds.

When I moved to Cape Cod in November, my goal was to beat that personal best in Season 1; a lofty goal, but a welcome challenge. I’ve hit a lull. There are plenty of big fish around, I just need to keep working the spots I’m confident in and stop the discouraging self-talk… this is the same voice that keeps me indoors on the days or nights I know I should be out there fishing.

Big bass are here. They’re in Buzzards Bay, the Canal, the rips, and Nantucket & Vineyard Sound, and the coming weeks are showing even more promise. Based on reports from Long Island and Connecticut, there’s a body of large, over-slot stripers slowly pushing through the Long Island Sound following schools of herring and menhaden. They’re taking their time pushing north as the water in the L.I. Sound has warmed recently, which has led to more life in the area. With all that in mind, here is my game plan:

The full moon tide hits on June 14th, and if things work out, it should time up almost perfectly with herring leaving their freshwater spawning grounds here on Cape. My hopes are that those even bigger bass we’re still waiting for, will be moving closer with the full moon tide. If all works out as I’m forecasting, estuaries and inlets will become funnels for big, lazy stripers to feed on spawned-out herring and their offspring.

I’m hoping I’ll break the spell and find the fish I’ve been looking for, and dreaming of, since June of 2020. But at least I can say that some of our crew at OTW here has been catching quality fish. My buddy Jack Burke, OTW’s videographer, caught a 30-pounder earlier this week.

Jack isn’t the only one capitalizing on the big bass bite around the Cape. 6-year-old angler Gussy Khang, caught his PB striper fishing with his Dad, Ger, on his Uncle AJ’s boat this past week in Buzzards Bay!

There’s plenty of good fishing to go around, so don’t let my personal doldrums drag you down. If fishing is slow, try new spots, throw new baits, work on a couple different techniques or retrieves and most importantly, stay optimistic. It’s that much harder to hook a fish when your head isn’t in the right space. Take it from me!

Here’s your report from the local shops and Captains around Cape Cod and Buzzard’s Bay.

“Fishing under the bunker schools in Narragansett Bay has been very good. This is First Mate Nate landing the biggest bass of the season so far. The fish measuring our at 47” estimating it in the low 40 pound class. There are a good number of bluefish mixed in with the bass. The sea bass fishing in Buzzards Bay is not what it has been at this time. We are have to work a little harder to get out full limits of jumbos. I still have not seen that big push of sea bass. If you can find the Pogie schools in Buzzards Bay there is a very good chance you will find Stripers and bluefish under them. These schools of fish kept my clients entertained when the sea bass bite was slow.”

“I had an outstanding trip with Kurt Lockwood and friends Scott and Rick on Saturday. We had lots of bass all day in the rips on topwater plugs, swimming plugs and soft plastics. Ended the day with one nice bluefish. My friends, Sean Gallagher and Bill Vandusen came up from NJ for the week and have been crushing it. In addition to striped bass in the rips and black sea bass in the deeper water, they even managed to jig up some cod, including this keeper, caught by Kim Gallagher.

The middle of this week has been a washout, but I’m looking forward to some better weather for my trips tomorrow and Saturday.”

Maco’s Bait and Tackle in Buzzard’s Bay reports that the sea bass fishing has improved in the bay, and the bigger fish have been found in warmer pockets of water around 28- to 32-feet. Fishing for scup between 20 and 30 feet is also producing lots of quality and quantity. There are reports of little fluke in the shop, and some small keepers are in the mix, but nothing substantial just yet. Stripers are biting on white hard plastics and lots of guys are chunking squid, pogies and mackerel.

Captain Jim from Patriot Party Boat reports that they got out this morning before the storm and caught some small scup in the stormy weather, but they couldn’t get where they wanted to. They’re sailing again for scup and sea bass this weekend, which should produce quality fish for the cooler.

Morgan from Sports Port Bait and Tackle in Hyannis reports lots of bluefish still hanging around in Vineyard Sound. Although the blues have been finicky, trying different topwaters should produce a bite. If you can get past the blues, you’ve got a good chance at sticking a good bass as well. There have been slot and over-slot stripers pushing in closer to shore with the southwest winds; they are also biting on white topwaters like the Doc, or soaked bunker chunks. Sea bass fishing remains strong in the Vineyard Sound with most fish coming on Gulp.

Captain Ross at Cape Cod Charter Guys reports lots of stripers and blues mixed together this past week, with plenty of slot bass caught and released. The bass were biting almost anything they threw, whether it was jigging, topwater or cast-and-retrieve swim shads through the middle of the water column. Captain Ross and his charters also found balls of pogies in open water being lit up by big bruiser bluefish that were pinning them to the surface. Bluefish are in thick schools, but the schools are still scattered between Hyannis and Buzzards Bay. Even the Canal has been holding a lot of bluefish. Throw a topwater and hope for the best!

Captain Derek Simons of Seastriker Charters reports that they’ve been nailing black sea bass in Vineyard Sound, and when the bite slows, they’ve had some decent blues in the mix as well to stay entertained. They’re cleaning up nicely,  fishing with Berkley Gulp and bucktails, and they expect good fishing to continue this weekend.

Want to get in on the bite? Find an OTW-approved Charter Fishing Captain around Cape Cod & Buzzards Bay

Black sea bass and scup fishing should be excellent this weekend, with plenty of sunshine and warmer weather in the forecast. Remember, warmer pockets of water around 28- to 32-feet deep have been most productive for sea bass, especially if you’ll be fishing with artificial baits like Gulp. If you’re interested in picking off some plate-size porgies, target 20- to 30-feet of water and use smaller profile Gulp. Who knows, you may just hook into a keeper fluke while you’re at it.

Slot and near-slot striped bass can be caught almost anywhere by now– surf or boat— and when you find them, it’s not unlikely that some blues will be mixed in. Keep a few options ready that will allow you to target different levels of the water column, and don’t get discouraged if the bass or blues won’t bite for you right away; maintain focus, stay optimistic and try something new, whether it be a different bait or a different spot.