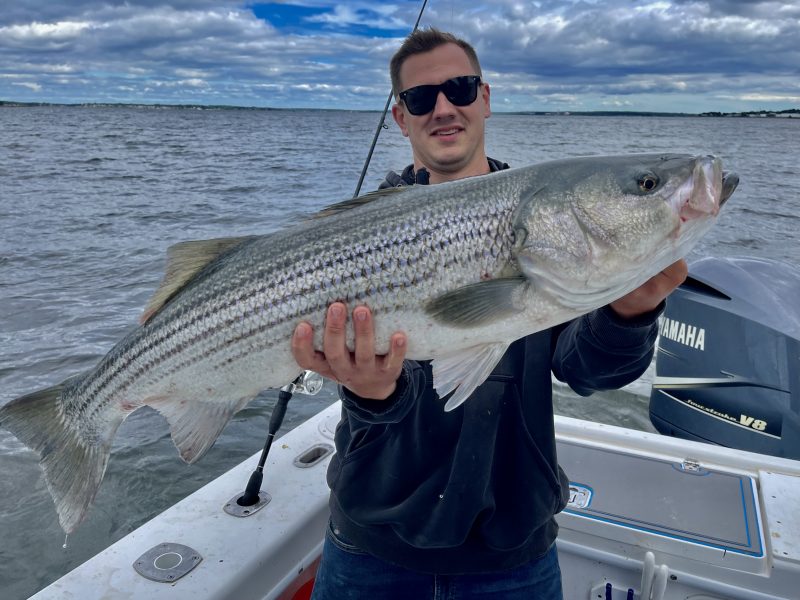 (Above) Fishnet Charters has been putting their clients on trophy stripers around the Cape this past week!

Eels, and pogy, and mackerel, oh my! A windy summer solstice has jumbled bait schools this week. Regardless, trophy stripers are still being landed routinely. I am still working towards my own Instagram-worthy June striper, but the vast menu of bait in our Cape Cod waters should have bass large and small eager to feed. With over-slot mammoths occupying my email inbox and social media feed, I am finding great consolation (and enjoyment) in the remaining back bay schoolies.


Late last week, I slipped into my kayak to patrol the Outer Cape marshes for bass picking off trapped pogy schools. Thankfully, the schoolie bite fit my schedule and the singing drag of my ultralight rod temporarily hushed my thoughts of keeper striped bass. I have found that fighting school bass in the kayak can be just as tense as battling a 40-incher from the boat. Sadly, climbing water temperatures will soon push these growing stripers out of the Cape’s harbors and estuaries, forcing anglers to peruse the wide sand beaches and swaying seas. For now, it seems that the Cape’s bountiful backwaters are still holding quality and school-sized bass, so take advantage of their accessibility!

With that being said, here are where the Cape and Islands’ finest have been finding the big-bellied stripers I’d rather be handling.

Canal Bait and Tackle has seen consistent bluefish on the west end. Scup and Sea Bass may still be occupying the Canal’s deeper sections. The east end of the Canal has been producing some stripers, but most have used the Northwest winds to escape into Cape Cod Bay. The boats northwest of the Canal have reportedly been bringing in 30 and 40 pounders.

Patriot Party Boat out of Falmouth had to do some refiguring after having his consistent bite thrown off by the racing currents of last week’s storm. However, scup and sea bass have still been making it over his gunnel. Also, Jim was delighted to hop on slot-sized stripers and aggressive bluefish near the Elizabeth Islands, an area that appears to be heating up.

“The Canal has died down some, but nice fish are still being caught periodically by sharpies like Bob Weir from Stoughton and Dom from Plymouth who has just completed his freshman year at the University of Maine and is currently in his sophomore year at Red Top Sporting Goods in Buzzards Bay. Dom, who hopes to become an Environmental Police Officer, hooked a 35 pound bass on a green FishLab that he fought through a dropping midafternoon west tide. Adam Smith from East Sandwich landed a 17 pound striper during an early morning slack tide near the east end, the only fish caught in that area. The Marine Corps veteran of 2 tours in Iraq used a green mac Savage to fool the linesider on the bottom. Bill from Maco’s Bait & Tackle in Wareham & Bourne said some slots were taken in the west end on soft plastic jigs and white magic swimmers. There are mackerel and a ton of bunker in the ditch so hopefully more of the predators return for the buffet.”

Fishnet Charters has mobilized to the brisk waters surrounding Cuttyhunk Island, finding sea bass with ease. They’re not over the striped bass yet, though, reporting that easily visible bunker schools likely have some stripey followers like the hoss pictured below.

Red Top Sporting Goods in Buzzards Bay has been intelligently utilizing the excess bait in Buzzard’s Bay, snagging pogy and taking them in towards the Canal’s west end and Buttermilk Bay. Big bass have been all over these live-lined baitfish as they pursue broad pogy schools deep into the harbors and marinas. The west end of the Canal has been steadily producing big bluefish, one disclosed catch tipped the scales at 15 pounds. Red Top has seen sea bass moving out towards the Vineyard Sound, slowing down historically fruitful spots such as Cleveland’s Ledge.

Sports Port Bait and Tackle in Hyannis reports stripers and blues biting persistently in the sounds of Nantucket and Martha’s Vineyard. They also advised the use of live bait, stating that Hyannis Harbor is still producing excellent stripers on mackerel and pogies. Their bluefish have been caught on topwater and subsurface hard baits, as anything soft won’t last long.

Captain Kurt Freund of Fishsticks Charters on Martha’s Vineyard reports:
“On my trips this week, we found that there are still plenty of bass in the rips, but they are getting harder to fool. We saw plenty of squid jumping and bass swirling and splashing and jumping in pursuit of the squid, but we just weren’t getting as many bites as we had last week. Of course, we did manage to fool quite a few of them, but it was not as easy as it was last week. On the plus side, though, we caught more bluefish and some were really big. Several were over 10 lb and at least one was over 12.”

Cape Cod Charter Guys’ Captain Ross has been hunting hogs, landing stripers in the 40-pound range on the Cape Cod Bay. The Vineyard Sound has provided a consistent bite as well. He emphasizes that most of his biggest catches have been marked in very deep water, only to ascend the water column and demolish big baits. After recognizing this pattern, Ross was able to milk it for a collection of very impressive bass, like the one photographed below.

Maco’s Bait and Tackle in Buzzards Bay has been pulling weighty stripers out of the deep cuts of Buzzard’s Bay. Pogy schools will often retreat into the warmer marinas and backwaters. Pogies rarely move alone, though. Schoolies through over-slot bass have been tracking down and feasting on these easy meals. Fishing is a multi-species endeavor at Maco’s, however. Their staff has experienced consistent bluefish action near Little Bird Island and past Stony Point. They also announced the advent of keeper fluke, which they’ve found on the Mashpee flats.

Want to get in on the bite? Find an OTW-approved Charter Fishing Captain around Cape Cod

In the words of John Hersey, “the conversation between wind and current” has pushed bait into some peculiar spots, but those that have cracked the code have been rewarded with enormous stripers. Look for big bass toward the bottom of your fishfinder display, as they have recently been seen deeper than during last week’s topwater explosion. Additionally, revisit your spring striper spots inside the harbors and back bays, which may now be brimming with pogy and hungry bass. The initial rush of gator bluefish may have partially extinguished but reports of 8- to 15-pound blues have been heard from the Canal to Hyannis. If you plan on targeting these toothy beasts, pack hard baits and heavy leaders as they’ll likely claim any soft plastics as collateral for their strong fight. Keeper sea bass are becoming sparser. For those with a case of jig-fever, cooler and deeper waters (at least 28-feet down) may be your antidote. Don’t neglect the freshwater! Post-spawn largemouth should be ready to munch after spending weeks laid up on beds.