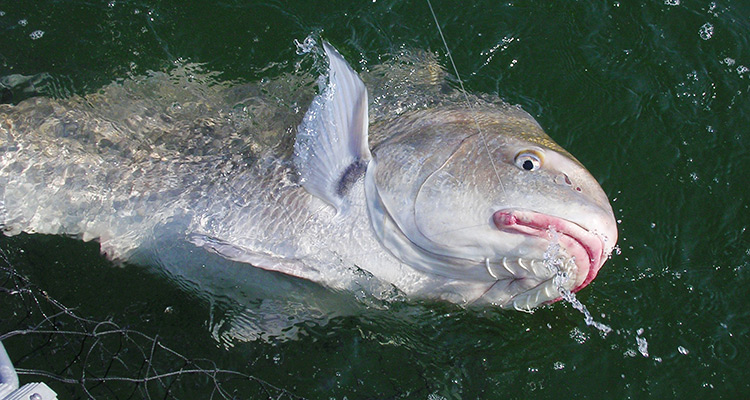 What a difference a week makes as fishing rebounded quite well over the past few days, especially for the beach action on striped bass. Striped bass to 40 inches were more of the norm for anglers soaking clam or bunker chunks. In addition, some of the northern inlets have been seeing regular runs of big gator bluefish during the incoming and outgoing tides. Another positive was the opening of our sea bass season and most shops reported excellent action at wrecks and reef sites to 90 feet. The backbays are providing plenty of action and keeping on fluke from slots to fish in the 8 pound range.

Hook House Bait & Tackle in Toms River reported gator bluefish roaming the Seaside and Island Beach surf and parts of northern Barnegat bay. Striped bass have been good on the backside of IBSP and also on the frontside with clams and bunker. Weakfish have been reported south, but no specific location was given. The shop recommended working the deeper holes with pink soft plastics.

Lacey Marine in Forked River had good reports of fluke being landed in OCC and DCC with S&S bucktails tipped with Gulp. Most of the fish have been in the 18 to 22 inches along with the 17-inch slot fish. Sea bass kicked off with excellent reports on limits of keeper sea bass along with a few cod for anglers fishing wrecks in the 100 to 120 range. Striped bass were cooperative behind IBSP and along the Barnegat inlet for anglers working soft plastics and artificials. The beaches have also been active for bass up to 40 inches on clam with the LBI area reporting a good number of fish.

Jerzey Buoyz Sportfishing reported a solid opening day of sea bass with boat limits for anglers. The crew has been working some deeper water for most of the keeper action. In addition to sea bass, the boat is booked for ocean striped bass trips and will be targeting them in the coming days.

Creekside Outfitters in Waretown had solid reports of blowfish in Barnegat bay both north and south of the “BI” buoy. Fluke fishing was been excellent for the usual spots in the bay and the bucktail jig tipped with Gulp has been working. Clam and bunker baits were flying out of the store for anglers fishing the local beaches as some nice fish have been caught during the outgoing tides. Night-time plugging resulted in stripers to 35 inches for anglers working the Loveladies and Harvey Cedar beaches.

Reel Reaction Charters out of Waretown was busy over the past week with bay fluke trips catching 20 to 35 fish per outing. Keepers have ranged from 4 to 8 per trip and the biggest has been just below 6 pounds. The skipper said they have been releasing quite a few keepers per trip and the tides didn’t matter as fish were caught on both sides. The crew will continue to run weekday afternoon trips until school lets out on June 17th, and then the schedule opens up to 7 days a week.

The Super Chic out of Barnegat Light reported solid sea bass fishing with good numbers of keepers and limits for anglers. The boat worked deeper wrecks to put some nicer fish and cod in the boat. The boat will be also sailing for striped bass through May and June, so give them a ring.

Tony’s Bait and Tackle in Manahawkin had reports of the LBI surf having a combination of striped bass, skates and dogfish. Blowfish have been reported in most spots in Barnegat bay with Double Creek and Oyster Creek channels having the best action. Black drum and striped bass are being chummed and landed around parts of Little Egg Harbor. White perch are still crushing grass shrimp baits in some of the lagoons along Beach Haven West.

Tackle Direct in Egg Harbor City reported solid action on striped bass along the beaches of Absecon and Atlantic City as well as excellent action along the edges of the Mullica. Fluke was the word for most backwater anglers as the 5 to 10 foot depths have been holding good numbers of fish. Killies, Gulp, and jigs have been the best baits this past week. The sea bass season opened and the shop received positive reports from most with limits of 13-inch fish.

Tight Lines Bait & Tackle in Somers Point said sea bass was the hot fish this past week with lots of good action for anglers working the Atlantic City, Ocean City and deeper wrecks. Some nice boat limits have been reported for anglers. Summer flounder fishing was solid over this past week, especially with warmer water. Most reported good action in the 5 to 15 foot depths and Gulp / minnow combinations have been working.

Badfish Charters in Ocean City has been working backsides of OC and fishing shallow water to find bluefish, fluke, and striped bass. The skipper has been using 3 to 4 inch DOA paddle-tail lures on some of the recent trips. The action is excellent right now, and they said there are a few dates available each week for charter.

The Cape May and Wildwood areas reported some nice flounder caught in back of Cape May and along the Delaware Bay. Additionally, reports of striped bass were positive for anglers fishing bayside and oceanside beaches with clam and bunker chunks. Weakfish and more weakfish have been caught around some of the Delaware Bay jetties on pink soft plastics and bloodworms. Most of the weakfish have been in the 18 to 24 inch range. Drum action heated up more this past week with excellent numbers of Drum fish caught in the bay on clams and cut crab.

The best bet for the weekend will be to hit the inshore wrecks or reef sites as there are plenty of sea bass to be cuaght. Cut clam dropped on two-hook rigs are almost guaranteed to catch sea bass, but if you want to target the bigger fish I would recommend jigging with AVA’s or flutter-jigs. Bay anglers should have excellent conditions this week to target fluke on both sides of the tides and the majority of shops said to target the 5 to 10 foot areas. Another option would be to hit striped bass by boat or land as we are seeing schools of 30 to 45 inch fish move through most of our areas. And If you haven’t heard yet, the Drum bite is on in Cape May – so there’s another option for anglers wanting to soak clam baits. Good Luck, Be Safe, and Tight Lines!