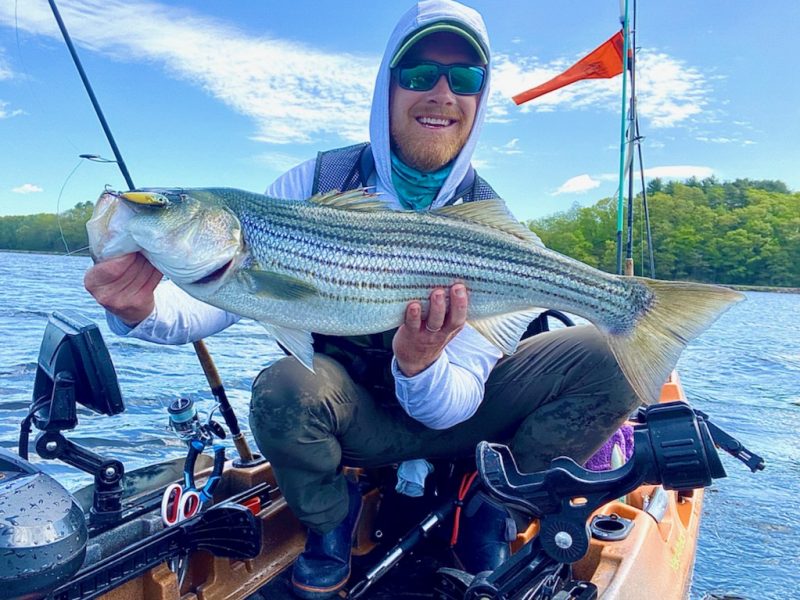 Matt, at Black Hall Outfitters in Westbrook told me that he has been getting out whenever he can, and while we’re not in full spring-run mode, things are shaping up nicely. There is a nice slug of striped bass throughout the river mouths, but they have been finicky on most trips. You can generally find them on your electronics, and if they are not willing to hit a larger topwater offering or swimming plug, be ready to downsize to a smaller offering. The lower river flats should warm up quite a bit this weekend, so the fishing should get progressively better. A nice slug of aggressive bluefish have also entered the mix over the past few days, so it appears we’re close to things blowing wide open.


Heather from Black Hawk Sportfishing reported that they have been able to sneak out a couple times over the past week, whenever there has been a slight weather window. The full boat trips have seen steady fishing, while the private charters have fared even better. Most trips have seen a limits of jumbo scup, and the recent moon tides seemed to have brought in a nice pick of weakfish. The Black Hawk has also been getting out for squid whenever they can, and while results have varied from day to day, all anglers have gone home with a solid catch! They will be fishing every weekend and most weekdays, depending on the weather, so be sure to check their website for updated scheduling!

Joe, at Diorio Guide Service is back in the water for his 2022 season! More and more fish are starting to move into the late spring tidal estuaries, and there is an influx of herring along with some fresh bunker to catch their attention. Joe has been having success matching the hatch with Joe Baggs Patriot Fish, Swarters, and 7-9-inch unweighted sluggos. The deeper reefs around the river mouths are also starting to see some fresh slot fish on 3-wayed bucktails and diamond jigs. With the water warming up and cleaning up this weekend, things should only improve, so be sure to get out there before it’s too late.

Mike Roy at Reel Cast Charters is seeing new schools of bass showing up regularly in and around the large tidal rivers. Big numbers of school bass have been common, and most trips are seeing plenty of slot fish in the mix as well. This week has seen a nice influx of bluefish, which is usually a sign that the late spring action is about to blow up. Fin-S fish and Sluggos have still been producing well, but if the fish appear to be finicky, don’t be afraid to downsize your offering. Reports of bunker are starting to trickle in the lower stretches of the river, so we should be close to seeing some bigger fish push in and for everything to blow open. Be sure to contact Mike for a spring-run trip before it’s too late!

Fisherman’s World in Norwalk reports that the striper fishing in the area is right on schedule, with a strong increase in action this week. The bigger fish are still to the west, but they are working their way closer each day. Anglers dragging bunker spoons, Mojos, and umbrellas are scoring good fish, along with those that are locating bunker schools and dropping a live offering. The fluke reports have been quiet, mainly due to some tough conditions, but it wouldn’t be surprising to hear of a few early season doormats showing up this weekend. Anglers fishing New York waters are finding some good flatfish, so they aren’t too far away. The north shore scup bite is also right on schedule, with good fish coming from 50-60 feet of water on just about any type of bait. The Saugatuck Reservoir regulars continue to report good largemouth/smallmouth bass action on shiners, while the Norwalk River continues to put up quality trout catches.

It may feel a bit more like summer than spring this weekend, but we have certainly entered that great in-between season period where fishing options are abundant. Striped bass have been the main show in town throughout Rhode Island and Connecticut, as Rhode Island anglers have welcomed some fresh bass to 40-pounds, while Connecticut anglers are seeing an influx of bigger bass into the tidal rivers and across the adjacent reefs. Rhode Island saltwater anglers should also be taking advantage of some large schools of squid that have inundated the area, and those squid have more than likely started to bring in the first push of doormat fluke. Connecticut anglers have the best of both worlds, with some solid striped bass running up the rivers in search of river herring, along with some fresh arriving bass and bluefish in the river mouths on the hunt of the first schools of bunker. With temperatures rising this weekend, we should only see improvements, in the form of more bunker, fresh bass, and fresh fluke arriving in our local waters. Freshwater anglers have plenty to work with as well, with big largemouth bass chewing in shallow water, and continued strong trout fishing across Connecticut and Rhode Island.