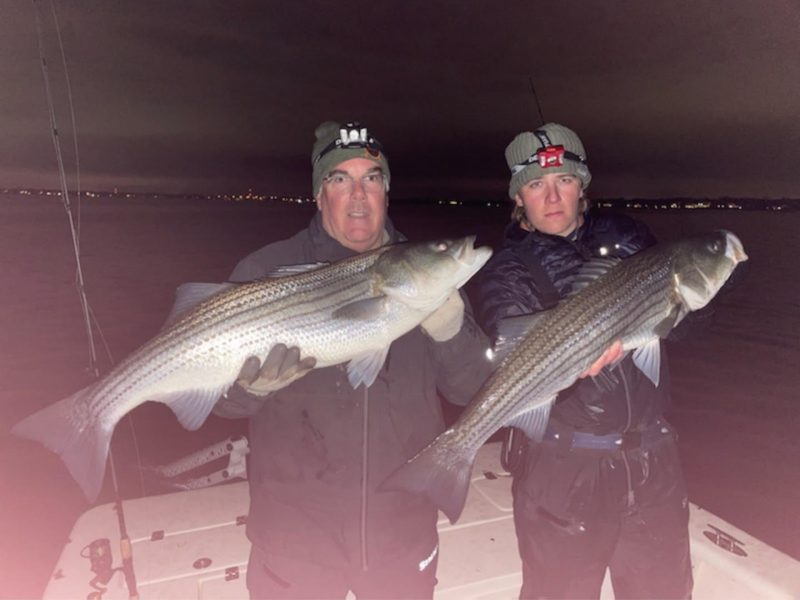 (Above) Dave G. and his son, Jack, with two nighttime stripers.

When anglers can make it out, the fishing is fair to good at the deepwater wrecks for tautog.  But the issue has been the wind and waves as it has kept most vessels tied to the dock.  The last day of the spring tog season is April 30th.  Summer flounder is set to open on May 2nd and I know there is a ton of excitement for the earlier start, especially in our southernly fishing grounds.  Most shops are loaded with bait and Gulp baits for the upcoming fluke season.  Striped bass fishing continues to get better for the backwaters in our area with good schoolie action and the sporadic keeper.  I know of quite a few anglers who’ve been making the trek to the Raritan to plug 40 inchers at night.  They have set the bite has been insane up there, hopefully our Delaware River bass begin making their way around Cape May.  Finally, I received some reports of gator bluefish being landed around the Manasquan inlet.

Hook House Bait & Tackle in Toms River said bluefish in the Manasquan has been the news of the week as the Murphy crew picked a few big ones around the inlet.  Striped bass have been landed off the Seaside and Island Beach State Park surf on fresh clam.  Bass to 31 inches have been picked up along the Toms River on bloodworm and most action has been in the morning.

Lacey Marine in Forked River had reports of striped bass hitting worms at the surface during the recent worm hatch.  Most of the action has been on the backside of Island Beach.  Anglers working the inlets with bloodworms found a few bass.  Tog fishing was a tad slow at the local reef site, but much better in the deeper water offshore.  The shop is fully stocked with Gulp baits for the upcoming Fluke opener.


Jerzey Buoyz Sportfishing reported good tog fishing over the past week with keepers being landed at most of the wrecks.  The skipper fished from shallow to deep and found a few keepers at most of the spots.  The crew will be sailing for striped bass in the coming weeks.

Creekside Outfitters in Waretown had reports of a few bass being pulled from the Barnegat Inlet on clam and bloodworm baits.  The best action has been the outgoing tides and there are some schoolies behind ISBP and LBI.  Tog fishing was good for angler working the inlet rocks, but better for boats fishing 77 to 90 foot.  Clam baits and green crabs have been working well.

Reel Reaction Sportfishing out of Waretown was out during a few evenings to pick between a dozen to 25 striped bass which were caught on soft plastics.  The day trips over the weekend produced tog, cod, and released sea bass.  The crew is anticipating the opening day fluke season which occurs this upcoming week.

The Super Chic out of Barnegat Light is getting much closer to start running striped bass and tog trips as the skipper said they may begin before the end of the month.  But they are finishing up with the last of the prep work for the season.

Tony’s Bait & Tackle in Manahawkin received reports of good white perch fishing from the lagoons of Beach Haven West.  Grass shrimp or small pieces of bloodworm have been working and the best times have been later afternoon towards dusk.  Stripers are still along the backside of Long Beach Island and around the mid-island bridges.  Most are in the 16 to 26 inch range, but the shop did report a few 28 inch fish being landed on bloodworm.  Tog fishing was better for anglers fishing the 80 to 100 foot wrecks with green crab, white crab, and clam baits.

Tackle Direct in Egg Harbor City reported good fishing from the jetties of Brigantine and Atlantic City with tog and striped bass being landed.  There are some keeper tog around if you work the crabs along the rocks and bridges.  Striped bass have been in the inlets and backwaters with bloodworms or clam being the best baits.  The shop is stocked up for the opening of fluke season next week.

Tight Lines Bait & Tackle in Somers Point had reports of tog being caught along the bridges on clam and green crab.  Most of the fish were small with an occasional keeper, but outside has been producing better action on the keeper front.  Striped bass activity has been excellent in the bays and around the bridges, especially at night.  Bloodworms and soft plastics are the lures of choice for most anglers.

Badfish Charters in Ocean City ran out solo for a few hours looking for open water stripers.  He said it took some time, but he found a nice school which was hitting subsurface plugs and topwater poppers.  The boat has a few openings in the coming weeks, so give them a ring.

The Cape May and Wildwood areas reported short and keeper striped bass caught on the Delaware bay and the oceanside beaches.  Clam and bloodworm baits have been having the best results.  Tog fishing has increased in terms of size and numbers with a few fish to 10 pounds being caught.  There has been word of a few black drum being caught on clam, but it’s still a tad early for the main body of fish.

The best bet for the weekend will be to hit the tog grounds if the weather allows on Saturday.  If you have the chance to jump on a boat, working the deeper water has been producing better results for tautog.  Fisherman working the jetties also have decent shots at keepers, especially Atlantic City to Cape May.  Cut green crabs worked on a light jig or rig should do the trick.  If you plan on fishing Sunday, I would suggest drifting bloodworm or casting plugs along the backside of most of our sedges and sod banks.  There are plenty of striped bass to be had and if you can find warmer water – that’s generally the best spots.  Mud flats or sand flats on the top to outgoing are producing decent numbers of fish.  Otherwise, Sunday should be spent gearing up for the fluke opener on Monday.  Good Luck, Be Safe, and Tight Lines!