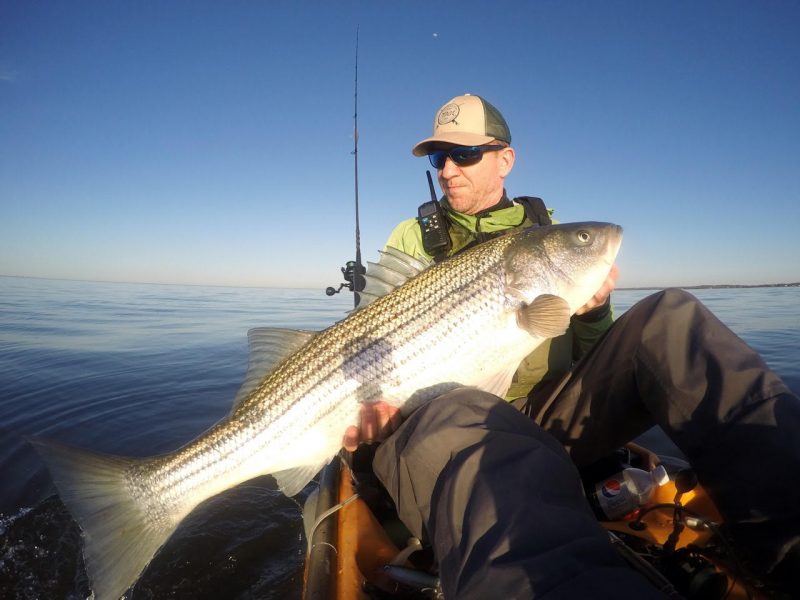 (Above: Giglio’s Bait and Tackle in Sea Bright shared this photo of shop regular Jon I. with nice striper he caught earlier this week.)

Wind, rain, and colder temperatures dominated this past week, but at least the upcoming weekend looks excellent on both the wave and weather front.  Striped bass are on-fire in the Raritan with the day and night bite working.  In South Jersey, it’s more of the schoolie bass with the occasional keeper mixed in for most of the area. Big stripers are still being landed along the Delaware River, but they should make the turn and eventually head around Cape May up through locales. Tog fishing has been fair at best for most anglers as the ocean temperatures are still hovering in the upper 40’s and 50mph winds over the past week didn’t help the clarity.  The bite should rebound with warmer and calmer seas, or at least let’s hope for it!

Hook House Bait & Tackle in Toms River had good reports of striped bass along the Route 37 bridge, Toms River, and backside of Island Beach State Park (IBSP).  Most of these fish are in the 20 to 27 inch class, but anglers have landed a few keepers.  The action continues to be on bloodworm and small artificials (soft plastics, plugs) worked with the current.  The shop said there were a few perch around the Toms River landed on bloodworm.  The issue the past week was the heavy winds, but as of Wednesday the bay was cleaning up nicely.

Lacey Marine in Forked River had reports of striped bass and some tautog landed along the Barnegat inlet before the midweek blow.  Anglers working green crabs on jigs and traditional tog rigs were catching some shorts along with a few keepers to 5 pounds.  Overall, the bite has been a little slow with the 47 degree incoming water temperatures.

Jerzey Buoyz Sportfishing reported good tog fishing as the skipper worked quite a few spots over the past week.  The crew has been putting some cod in the box along with keeper blackfish to 6 pounds.  Capt. Jason did text me and let me know they have some availability, so give them a call to get in the action.


Creekside Outfitters in Waretown had sporadic reports of striped bass landed along the Forked River, backside of IBSP, and the back lagoons of Barnegat.  Small soft plastics, Yo-Zuri Crystal Minnows, and bloodworms have been working for these fish.  The key has been fishing on the moving tides and finding cleaner water.  Some anglers have been hitting the Graveling Point area with bloodworms to find action on schoolie striped bass.

Reel Reaction Sportfishing out of Waretown splashed the big boat over the past week amid the windy conditions and will be targeting both blackfish and striped bass.  The skipper did make it out before the extreme winds to harvest several bushels of clams for the upcoming sea bass season.  After the blow, the crew was chartered for a 3hr night striped bass trip which resulted in excellent action on 18 to 26 inch fish.

The Super Chic out of Barnegat Light is getting much closer to start running striped bass and tog trips as the skipper said they may begin before the end of the month.  But they are finishing up with the last of the prep work for the season.

Tony’s Bait & Tackle in Manahawkin had excellent reports of white perch being caught along the lagoons in Beach Haven West on both cut bloodworm and grass shrimp baits.  Some of the perch have been close to 2 pounds.  Striped bass have been more active along the eastern parts of the mainland, but the week’s weather had them a little off the bite.  Tog fishing has been very slow as reported by most of the anglers with the best reports coming from the southernly reefs such as the Atlantic City and Ocean City.

Tackle Direct in Egg Harbor City reported poor fishing conditions this past week, but it did rebound as the Mullica and some of smaller creeks have excellent numbers of schoolie bass to bend a rod.  Zoom soft plastics or DOA swim baits tipped on light jigheads are providing the best shots at these fish.  Tog fishing has been steady for most anglers hitting the inshore reefs and there has been some cod caught on the deeper spots.  The Atlantic City area had a good number of striped bass caught with a few keepers to 32 inches along with a couple Drum on clams.

Tight Lines Bait & Tackle in Somers Point had fair reports of tog fishing before the blow as the water has been cold.  White crab, green crab, and clam baits have been working equally on these fish and the deeper reef sites are the best bet.  Anglers hitting the bayside striped bass grounds are finding lots of cooperative fish from inlets back to the sods.  Small soft plastics, live bloodworms, and plugs have been doing the trick on these fish.  The shop has both regular and jumbo sized bloodworms stocked for striped bass.

Badfish Charters in Ocean City worked several small cuts and sod banks over the past week to put clients on striped bass to 29 inches.  The skipper has been working swim baits and small soft plastics in the backwaters to catch the bass.  There are a few openings remaining for May and June, so give the captain a call.

The Cape May and Wildwood areas reported better striped bass fishing before the blow as the waters have begun to warm.  Anglers working bloodworms are catching the greatest number of fish and some keepers have been caught along the Delaware Bay.  Anglers working the surf down to Fortescue have caught bass up to 31.5 inches.  Tog fishing was hit or miss this past week, especially with the heavy winds and seas.  The local jetties have been producing a decent number of short tog on green crabs, but there have been some in the 4 to 6 pound range landed.  Most of the local shops in Cape May have green crabs, so give it a try.

The best bet for the weekend will be to hit the tautog or blackfish grounds as the sea conditions look superb for the weekend.  The deeper wreck or reef sites are holding the best number of keepers, but the bite has been fairly slow especially as you move north.  It seems that the Atlantic City reef site is providing the best action on keeper blackfish and several boats have reported 4 to 5 man limits.  By far, that’s the best action around in terms on tog.  If your in the vicinity of the Wildwood and Cape May reef site, both are good spots to try.  Striped bass fishing has been good to excellent for most of our area for short to 30 inch fish.  Bloodworms, sandworms, and clam baits are good ones to try.  If your fishing from land, give Graveling Point a try as many reports came from this area for anglers soaking the jumbo bloodworm.  Good Luck, Be Safe, and Tight Lines!