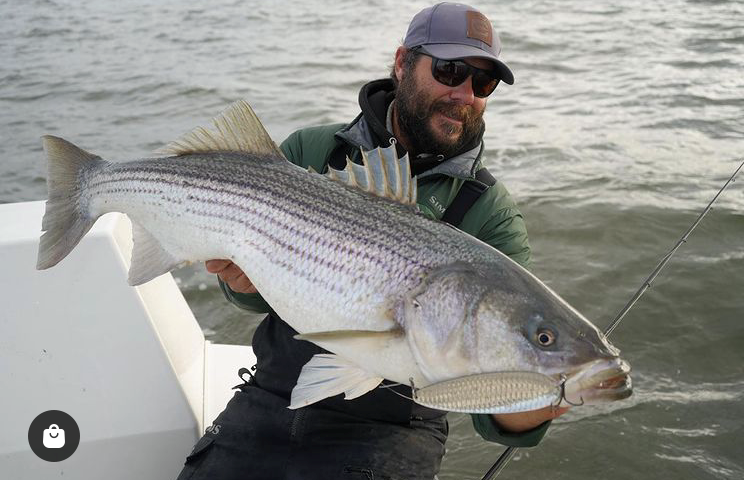 (Above) Mike Gleason of TAK Waterman in Long Branch took this photo of Rob Radlof and a beauty of a Raritan Bay bass he caught on a flutter spoon.

Bluefish have joined the fray, adding some muscle to the epic striped bass bite currently underway.

Gator-size blues were reported in the Manasquan River while smaller fish were caught along the beaches. The numbers aren’t big as yet, but that should change soon. In the meantime, the bass just keep chewing. They are spreading out in Raritan Bay and showing up in the surf from Sandy Hook down to Island Beach State Park.

Blackfishing looks to be finishing its spring season on a high note with good catches reported on the reefs, inlets and in the Point Pleasant Canal. Unfortunately, togging closes on Saturday.

The good news is that fluke season opens on Monday and lasts until Sept. 27.

This year will see some big changes to the regulations. For 2022, anglers will be able to keep two fish from 17 to 17.99 inches and one fish 18 inches or larger. The intent of the new regs is to spare the big breeders while giving anglers a better chance to take some fish home.


Capt. Jay Richardella of Side Job Charters out of Lockwood Boat Works in South Amboy has been running morning and afternoon bass trips and limiting out every time, usually pretty quickly. Then it’s catch-and-release.

Rick Hebert of Tackle World in Rochelle Park said he fished Raritan Bay on Sunday with shads, flutter spoons and trolling Mojos. What worked best, he said, was the three-ounce Mojo trolled with a spinning rod. His crew marked loads of fish, he added, way more than they caught, but still got their limit of keepers along with some throwbacks. Hebert also reported good trout fishing in the rivers and streams as dry weather has allowed them to return to normal levels.

Capt. Phil Sciortino at the Tackle Box in Hazlet said the stripers are still going nuts in Raritan Bay and have spread out to the middle of the bay and Sandy Hook. Fish up to 40 pounds have been caught on Mojos, flutter spoons, chunks, eels and plugs.

Mike Pinto at Giglio’s Bait and Tackle in Sea Bright said the bass fishing in the Shrewsbury and Navesink rivers has been really good on Yo-Zuri Twitch baits and Hydro Minnows. The beach bite for bass has also improved with anglers getting fish on shads and bait. Pinto said the Sea Bright surf was one of the places that the bluefish appeared this week. Pinto also reported shop regular Lucky Leo caught a tiderunner weakfish in a nearby river without specifying which one.

Mike Gleason at TAK Waterman in Long Branch said he got his first report of bluefish in the local surf on Tuesday. There are also more bass being caught from the beach. He’s been busy catching bass up in the bay on flutter spoons, Doc Spooks and plugs. Gleason said it’s a good mix of fish from the teens up to 30 pounds. The shop, he added, is fully stocked with Gulp, jigs and anything else you’d need for the fluke opener.

Bob Matthews at Fisherman’s Den said there are a good number of fluke in the Shark River which bodes well for Monday’s opener. The Den is also ready for the fluke season with rental boats, Gulp and bucktails. He said there are some small bass in the Shark River as well, but nothing like what’s happening to the north and south. Bass are also showing up in the Deal surf, he said, and he also heard about the blues in the Manasquan River. Blackfishing is still good at the Shark River Inlet if you hurry.

The Big Mohawk out of Belmar has been doing well with blackfish and will be sailing Friday and Saturday for them. Come Sunday, it will be a ling special from 7 a.m. to 4 p.m. Check the Facebook page for details.

Capt. Pete Sykes of Parker Pete’s Sportfishing out of Belmar said the weekend striper fishing was good aboard the Express with Saturday being the better day. It was an easy limit then the crew played catch-and-release. Sunday’s wind made for a tougher day, but the boat still managed its limit. Capt. Sykes has openings available for striped bass trips this Friday and Sunday and he can be contacted through his website and Facebook page.

Jason Szabo at Fishermen’s Supply in Point Pleasant Beach said the striper fishing is good in the Manasquan River and back into Barnegat Bay. Anglers fishing plastics at night have been doing especially well at the bridges. He, too, mentioned the bluefish appearing in the Manasquan River. Blackfishing, he said, has picked up in the Point Pleasant Canal just in time for the season to end.

Capt. Kenny Namowitz on the Mimi VI out of Point Pleasant Beach said his crew of regular toggers have been doing well this past week. He plans on fishing every day for blackfish until it closes and he’s got a few openings for the remaining days. After blackfish ends, he’ll be bottom fishing or targeting stripers. Check his Facebook page for the schedule.

Capt. Danny Gregory on the Norma K III out of Point Pleasant Beach said the blackfishing has been good for his fares the last week and he’ll be togging through Saturday. Then it’s on to striped bass.

Frank Giacalone at Gabriel Tackle in Brick also got reports of blues appearing in the Manasquan River and Point Pleasant Canal. The bass bite is picking up in the surf with keepers landed on clams and plastics and they’re hitting sand and bloodworms in Barnegat Bay. The Mantoloking Bridge is also giving up schoolies at night and early in the morning on shads and SP Minnows.   Giacalone added that anglers hitting the local lakes and streams are doing very well with trout and largemouth bass.

Pete Kupper at Charlie’s Bait and Tackle in Normandy Beach said the bass fishing on the beaches has really improved with fresh clams catching most of the fish. There have been some nice keepers mixed in with the shorts. Paddle tails and other soft plastics have also accounted for a few stripers from the sand. Barnegat Bay continues to produce stripers and Kupper said the mouths of the lagoons have been good spots. You just have to pick the right one.

Ray Kerico at Grumpy’s Bait and Tackle in Seaside Park said the local beaches are starting to give up a lot of nice stripers on fresh clams. Island Beach State Park in particular has been producing plenty of keepers and let’s hope it stays that way for the Annual Governor’s Surf Fishing Tournament on Sunday, May 15. Full contest details can be found on the NJ Div. of Fish and Wildlife website. Same-day entries are welcome. Kerico also confirmed the presence of bluefish in Barnegat Bay. The bay, he added, is still full of smaller bass, hitting bloodworms and small plastics.

It’s still all about the bass. They are in the rivers and bays with Raritan Bay holding the bigger fish. They’re also showing up on the beaches in better numbers and larger sizes with fresh clams doing the trick. A few beach fish are also being taken on artificials.

Bluefish showed up in the tidal rivers and on the beaches and you can expect to see more of them in the coming days. Popping plugs, shads and swimmers will work for them. Expect to lose a lure or two.

Tog fishing closes on Saturday so hurry if you want to get in on that bite. They are at the inlets and offshore reefs.

Plus, the fluke season opener is on Monday.