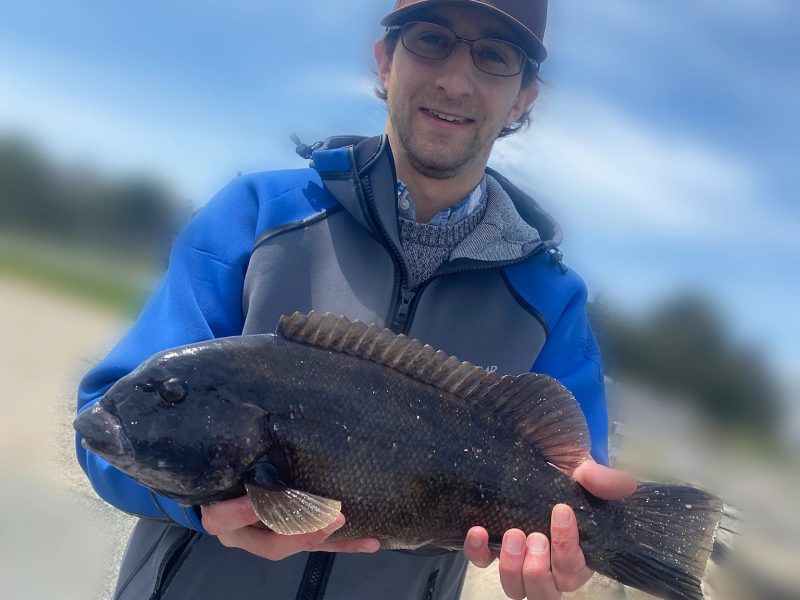 “I’ve got a fever, and the only prescription, is more cowbass.”

That’s how Christopher Walken said it in that famous SNL skit, right? In any case, I have seen and heard enough about stripers biting seemingly everywhere but the Cape.

The spring migration is well underway, and holdover bass have been active until the recent, windy, cold front slowed things down a bit. Last week, I spoke to Captain Stavros Viglas from Martha’s Vineyard, and he had just gotten into his first liced-up schoolie bass of the season. For more on that, check out the video here.

There’s no rush, but as a New Yorker I didn’t realize that 2 or 3 extra weeks of waiting for the bass would feel like 2 or 3 grueling months. My surf gear is packed up and ready to go at a moment’s notice, and over the next few nights I’ll be scouting (and casting) at a few new spots I’d like to try.

Largemouth bass have kept me busy, and call me crazy, but I haven’t even attempted to catch any freshly stocked trout. I’ve spent what little fishing time I’ve had recently, by going out late at night for big largemouth bass when the day is done. Although I only found luck one night with Anthony DeiCicchi, it was worth it. I like to “practice” staying up late casting into the darkness, to ready myself for the long night fishing season ahead.

It’s only a matter of days, hours, perhaps even minutes before the first real push of migratory schoolies reaches Cape Cod, and based on the proximity of a few floaters last week, I’d say: the bass are here.


It’ll be tough to find the migratory fish. But they will be aggressive if they can be located. Downsized soft plastics and lightweight jigs will be the ticket in the first couple weeks, then plugs, minnows and poppers will follow suit as the water warms and baitfish congregate.

Gunnar, over at Red Top Sporting Goods in Buzzards Bay said there have been schoolies coming  consistently from the shores of Martha’s Vineyard and holdovers have been active near New Bedford. This time last, Gunnar was already catching liced up fish, so it’s only a matter of time. There haven’t been many reports of tog, although OTW’s Jimmy Fee managed to hook a few today on his lunch break with TV Producer Adam Eldridge.

Stocked trout are still biting well and Red Top is carrying shiners and worms, despite the stockings slowing statewide as many anglers shift their focus towards saltwater.

Evan at Eastman’s Sport and Tackle in Falmouth reported sightings of bait fish being attacked close to shore down in Woods Hole. A similar report came from further East in Hyannis, with whisperings of a ball of white water just out of casting range, and a ton of birds taking interest. Evan shared that he’s heard of mackerel in Vineyard Sound with racer bluefish on them, which would be surprising to see them so early, but also not surprising- being that this is where Stavros Viglas caught the first reported migratory bass last week. Blues have been in past reports already, with Dustin Stevens catching dozens from the kayak two weeks back. Eastman’s is still carrying big shiners and trout worms for all the largemouth bass enthusiasts and trout fishermen out there. On the saltwater side, Evan said this weekend they’re stocking crabs, squid, mackerel, bunker and sea worms due to customer demand and increased interest.

From Sports Port Bait and Tackle in Hyannis: Nick reported migratory fish hitting Rhode Island and moving north with bait while the waters slowly warm. Sports Port is seeing freshwater fishing picking up with warmer weather. Largemouth are nearing the prespawn stages and trout stocking is slowing, but the fishing has been good. Stop in for your shiners, trout worms and more.

Migratory bass will be arriving any day, or even any minute. With rumblings of bluefish around, it’s possible that the spring migration is about to bust wide open. I’ve been following the bite around my hometown on Long Island and there’s been nothing but good news of plentiful, big bass that are feeding aggressively on soft plastics, jigs and plugs like SP minnows, Hydro Minnows and metal lips. Stavros gave me an update from the Vineyard, saying striped bass have moved in along the beaches with some spotty action in Nantucket as well. Holdover fish are active in salt ponds and bays, or anywhere around river mouths with the arrival of herring and glass eels. Things are only getting better. Grab your leader and any last minute terminal tackle needs at the local shops, and hit your early season haunts; the bite is about to ignite.