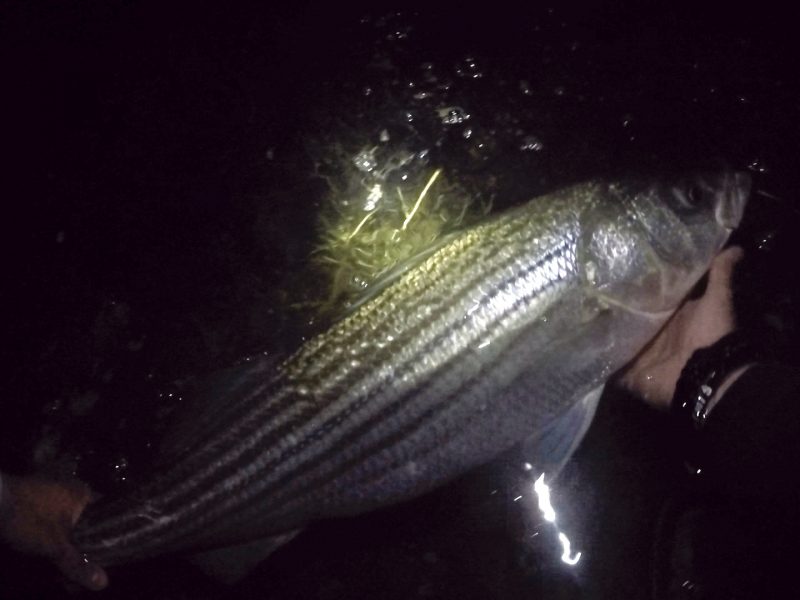 Cold weather to start the week, but warm weather to end the week and perfect timing for the start of the tautog season which opens April 1st.  Anglers should hit the deeper wrecks as the inshore temperatures are still fairly on the cool side.  Clam and mussels are the better baits for the early season as tog are generally on the metabolically sluggish side.  Anglers working the bay structure or rock lined jetties may also find some feeding tog.  Striped bass have been pretty active in March, but the early part of this week had them on the lockjaw with brutal frigid temperatures.  The bite should rebound through this upcoming weekend.

Hook House Bait & Tackle in Toms River reported a dip in striped bass action as the frigid temperatures had fisherman and striped bass off their game.   The bite should rebound to the end of the week with warmer temperatures.  The Route 37 bridge and parts of the Toms River are holding some numbers of striped bass.  The shop has received some decent numbers of tog rigs and jigs for the season opener.


Lacey Marine in Forked River reported striped bass and white perch being landed along the Toms River and some perch caught in Beach Haven West area.  Striped bass have been active along parts of Forked River to Barnegat.  Anglers casting small swimshads and plugs are finding decent numbers of short striped bass.

Jerzey Buoyz Sportfishing will be splashing the boat this upcoming weekend and running charters for tog and striped bass in the coming weeks.  The skipper said they are still booking trips for the season.

Creekside Outfitters in Waretown received a shipment of green crabs for the upcoming tautog season.  There are some striped bass around the western parts of the bay and anglers soaking bloodworms and clam chum are finding winter flounder.

Reel Reaction Sportfishing out of Waretown fished this past weekend prior to the cold blast and the crew had 20 striped bass on soft plastics and clouser flies.  All of the action was during the evening and the skipper will continue to run 3 hour evening striped bass trips.

The Super Chic out of Barnegat Light continued its routine maintenance for the season and coast guard inspections as the crew is preparing for late April and May timeline.  The skipper said they are looking to start running by early May.

Tony’s Bait & Tackle in Manahawkin received several reports that striped bass are chewing around the bridges off Long Beach Island and closer to the inlets on bloodworms.  White perch are hitting around the Beach Haven West area on grass shrimp and bloodworms.  The shop will have green crabs for the start of the tautog season, so stop in and gear up.

Tackle Direct in Egg Harbor City reported excellent striped bass action up the Mullica to the Lower Bank area and most of the fish have been landed on small soft plastics and plugs.  Anglers drifting bloodworms are finding striped bass and some white perch in the mix.  The shop has a load of tog jigs in stock.

Tight Lines Bait & Tackle in Somers Point received a shipment of live eels and green crabs for striped bass and tog.  Striped bass and white perch are being caught in the Tuckahoe, Mullica, and Great Egg Harbor rivers.  There has also been some striped bass caught along the Corson Inlet area and most of the bridges along Somers Point.  The shop has a full line up of tog rigs, jigs, and gear for the upcoming start of the season.

Badfish Charters in Ocean City worked some areas in the back rivers, tidal creeks, and channels to pick at striped bass. The skipper will be running trips through the rest of the month targeting striped bass along the shallows and backbay areas.

Ocean City Fishing & Cruising Fleet in Ocean City has busy been working on the boats for the upcoming season and will be targeting bay fluke with the start of the season of May.

The Cape May and Wildwood areas have schoolie striped bass action the further you get away from the inlets with the backbay marshes holding fish.  The Delaware bay has been relatively quiet, but with April arriving soon the drum fish should begin filtering into the area.  The Fortescue area has been very good with striped bass and white perch to 12 inches caught along parts of the Fortescue creek.

There are more options this weekend with the opening of the April tog season and the best bet may be to target some of the tog on the deeper wrecks.  Softer baits should produce more action as tog are somewhat slower on the bite during the early part of the season.  Striped bass, white perch, and winter flounder are still other good options for the weekend.  Bloodworms floated or drifting along backbay marshes and tidal creeks typically produce striped bass.  Winter flounder action has been good and should continue over the weekend for anglers anchoring up in Barnegat Bay and areas around the Route 37 bridge.  White perch should be in play throughout parts of our area and it’s best to target areas with freshwater influx.