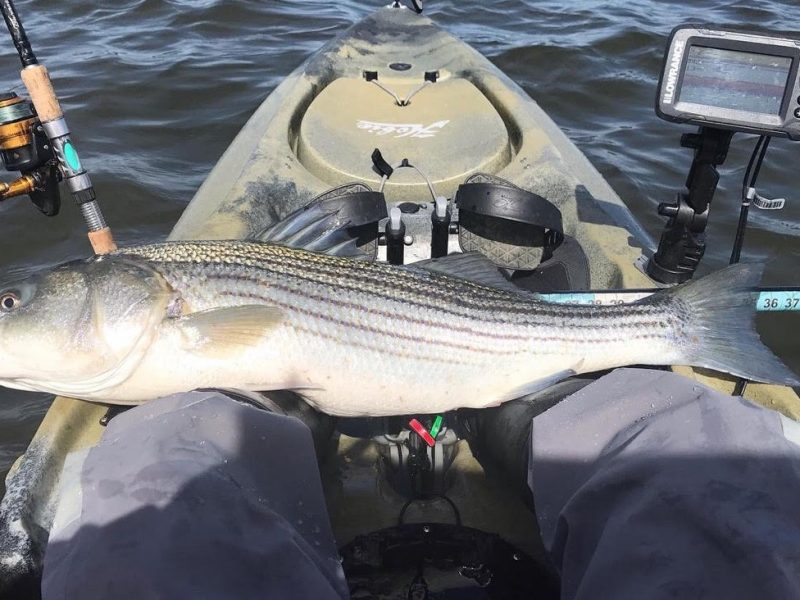 The warmer weather over the past week put a lot of our striped bass on the feed throughout the backbays.  It looks like we might get another shot of colder area into the early part of next week, but hopefully it’s short lived and the last of winter.  Most of the tackle shops reported the warmer flats and areas to the west had the better bites.  The tide was a factor with more action on the warmer outgoing as compared to the cooler incoming ocean water.  White perch fishing has slowed up a tad in the Mullica Rivers, but there are still fish to be caught as anglers working grass shrimp or bloodworm baits have been landing fish.  This is the last weekend prior to the opening on the tog season which is set for April 1st with a 4 fish bag limit at 15 inches.

Hook House Bait & Tackle in Toms River reported a good bite along the Toms for striped bass and there have been a few white perch around.  Winter flounder action has been good with some pockets of fish north and south of the Rt. 37 bridge.  Bloodworms or clam with heavy chum has worked for these nice, fat fish.

Lacey Marine in Forked River was busy restocking as the shop had their annual Spring boat prep sale.  Most anglers have been prepping boats and doing bottom painting, but a few have been hitting the water for striped bass and winter flounder.  Anglers working just north of the Rt. 37 bridge were able to find some quality winter flatties.  The bite along the Toms River has slowed, but parts of Barnegat bay have some decent numbers of striped bass.

Jerzey Buoyz Sportfishing had another busy weekend prepping their vessel for the upcoming season.  The crew is putting the last of the finishing touches and will begin the 2022 season targeting tautog in April.

Creekside Outfitters in Waretown had some reports of white perch being caught along the western parts of Barnegat bay and into Beach Haven West.  Anglers working some pieces of bloodworm or whole grass shrimp have been doing well.  Striped bass were a little sporadic this past week, but anglers did put a few on the hook along parts of the Forked River.

Reel Reaction Sportfishing out of Waretown had quite a few striped bass to 28 inches again this week as the skipper has been scouting some new areas.  All the bass were caught on small swimming plugs worked slow and the skipper had 34 bass in less than 2 hours.  The crew has a few weekday night’s available for backbay bass plugging, so if your interested give them a ring.

The Super Chic out of Barnegat Light continued its routine maintenance for the season and coast guard inspections as the crew is preparing for late April and May timeline.  The skipper has been booking a variety of trips all the way into the fall, so give them a call.

Tony’s Bait & Tackle in Manahawkin had some reports of striped bass hitting at the area bridges, but the action has been hit or miss.  There has been action along the back-channels of Great Bay and Graveling Point.  Bloodworms or clam baits are working on the striped bass and anglers fishing further of the Mullica have reported white perch.  Locally, Beach Haven West is producing some white perch during the late afternoon tides on grass shrimp and small lures.

Tackle Direct in Egg Harbor City had some nice reports of white perch being caught along the rivers by land and kayak fisherman.  Some of the perch approached the jumbo category with weights of 1.5 to 2 pounds.  Anglers working the bridges of Somers Point, Sea Isle and Wildwood have been able to find some striped bass approaching keeper size with small 3 to 4.5 inch plugs.

Tight Lines Bait & Tackle in Somers Point has received a nice shipment of jumbo bloodworms this past week and these baits are perfect for the bay striped bass. Anglers drifting these along some of the marsh drop-offs and bridges have been finding a steady pick of striped bass to 28 inches.

Badfish Charters in Ocean City worked some areas during the quiet mornings this past week to find cooperative striped bass in the bay.  The skipper will continue to ply the backwaters over the next few months as more stripers make their way into the bays.

Ocean City Fishing & Cruising Fleet in Ocean City has been steadily getting all of their boats ready for the season with routine maintenance and coast guard inspections.  The fleet is anticipating a good start to the season with tautog and sea bass.  They said to check the website or call for details on upcoming trips.

The Cape May area had nice action on schoolie striped bass and had some nicer ones approaching 30 inches.  Anglers working the western parts of Delaware bay are finding success, especially along some of the river mouths.  White perch continue to be caught in the rivers near Fortescue on grass shrimp and bloodworm.

The best bet for the weekend will to try your luck at one of the three available species:  winter flounder, striped bass, or white perch.  Winter flounder fishing has been very good and prospective anglers should look to hit areas on the north-side of Barnegat bay.  Bloodworm and clam chum should do the trick, but the key is using multiple chum pots.  Striped bass have been much more active over the past week, so look for warmer water and baitfish.  If you can find those two variables, you can usually find feeding striped bass.  The western parts of our bays have been producing better numbers.  White perch are still around as the bay water is hovering in the mid-forties, so look for the freshwater outflows to find them.  Brackish is best and so is grass shrimp for white perch.  Good Luck, Be Safe, and Tight Lines!