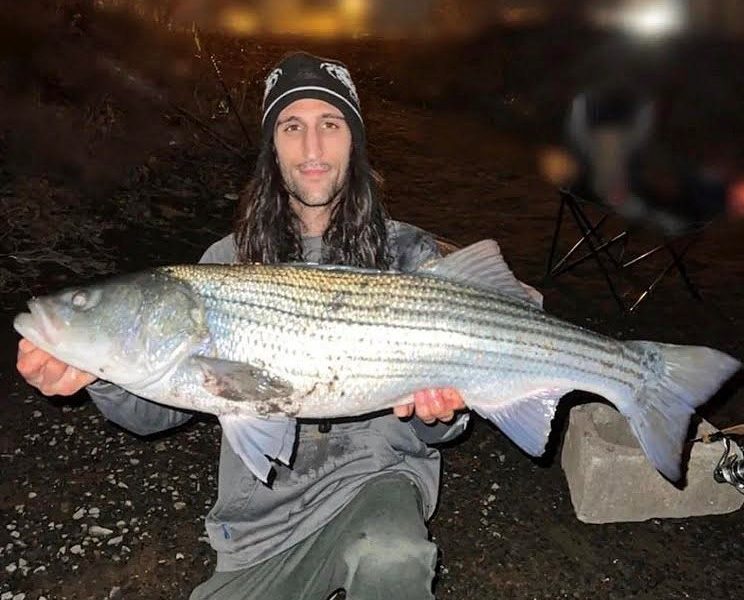 Over the past two weeks the word has been out on resident or “hold over” striped bass as anglers have been able to catch a few keepers. Some areas, especially our southern locales and rivers, have had excellent numbers of stripers. Anglers working bloodworms, soft plastics, and even grass shrimp intended for white perch have been catching the striped ones. We have only two weeks left until we can start targeting tautog, so take some time to get the gear ready.

Hook House Bait & Tackle in Forked River was busy restocking their shelves for the upcoming season and they are loaded with bloodworms.  The store said the striped bass fishing has been pretty good around the bridges of Route 37 and parts of the Toms River.  Anglers in boats and kayaks have been getting into some bass during the evenings.  The shop is open 7am to 7pm, so stop in to get the latest report.


Lacey Marine in Forked River has been busy with reports of anglers catching striped bass from the Toms River and throughout some of the lagoons around Forked River and Waretown.  Although most are of the sub-keeper size, they have been cooperative on small Fin-S lures worked along the ends of the lagoons near the bay.  Anglers have been also running to the Mullica to get in on the perch fishing.

Jerzey Buoyz Sportfishing had a busy winter prepping the vessel for the upcoming season and the skipper is booking trips for April, May, and June.

Creekside Outfitters in Waretown had some reports of striped bass caught along the lagoons of Waretown and Forked River.  Most of the action has been on small plugs or 3/8oz jigheads worked on

Reel Reaction Sportfishing out of Waretown / Barnegat Light has been pre-fishing some areas south on the parkway to find striped bass to 27 inches on soft plastics and small plugs.  The crew will be running some evening charters on the skiff over the next coming weeks and there are still a few dates left in April for tautog.

The Super Chic out of Barnegat Light said they would start running fishing trips towards the beginning of May. The crew and skipper have been busy readying the boat and gear for the upcoming season. They are booking striped bass and sea trips for the month of May, so now is the time to get on the schedule.

Tony’s Bait & Tackle in Manahawkin reported some white perch being caught in areas of beach haven west, but the action has been sporadic. The better bite has been along parts of the Mullica River on grass shrimp and pieces of bloodworms. Striped bass action has been good along the west parts of bay from Barnegat up to Lacey.

Tackle Direct in Egg Harbor City was another shop with good reports of striped bass picking up small plugs, bloodworms, and 4-in Zoom baits.  Most of the action has been further up the local rivers, but don’t count out some of the bridges, especially if they have lights.  The shop is open daily and has some spring deals.

Tight Lines Bait & Tackle in Somers Point has been open daily from 7am to 6pm for the past few weeks and is well stocked with jumbo bloodworms and fresh bunker.  The striped bass bite has been excellent for the start of the season as lots of residents held over for the winter.  Anglers have been finding good action on both sides of the moving tides with the western part of the bays producing d=

Badfish Charters in Ocean City has been plying some of the backwaters since the start of the season and the skipper has been able to find some schools of bass to 31 inches.  There are some prime dates available in the coming weeks, so give the crew a ring.

Ocean City Fishing & Cruising Fleet in Ocean City has been working on their vessels in preparation for the upcoming season. The opening of sea bass season in less than 2 months away and the crew will be ready.

The Cape May area has been seeing some nice action on small striped bass with most of the bites coming from the western parts of the bays.  Anglers working the marsh tidal creeks via land or boat have been able to catch throwbacks on small Yo-Zuri plugs.  Areas along the Delaware Bay around Fortescue and further west have been having good white perch action along some of the rivers.

The best bet for the weekend will be to soak bloodworms along the bay areas and there are plenty of spots so you don’t always need a boat, especially during the early part of the season. Bloodworms were even getting it done up north in the Raritan, which will see more fish pushing through towards the end of the month. The bridges of Ocean, Atlantic, and Cape May counties have an excellent number of bass being caught during the night tides. In addition, some of the sedges and marshes have good access to channels or points that typically hold striped bass during this time of year.  A few jumbo bloodworms or a bloodworm ball on an inline circle hook will do the trick.  On the perch front, finding those brackish or freshwater influenced areas is the key to finding feeding fish.  Grass shrimp or small cut bloodworms are perfect baits, and don’t be surprised if you hook a bass, Good Luck, Be Safe, and Tight Lines!