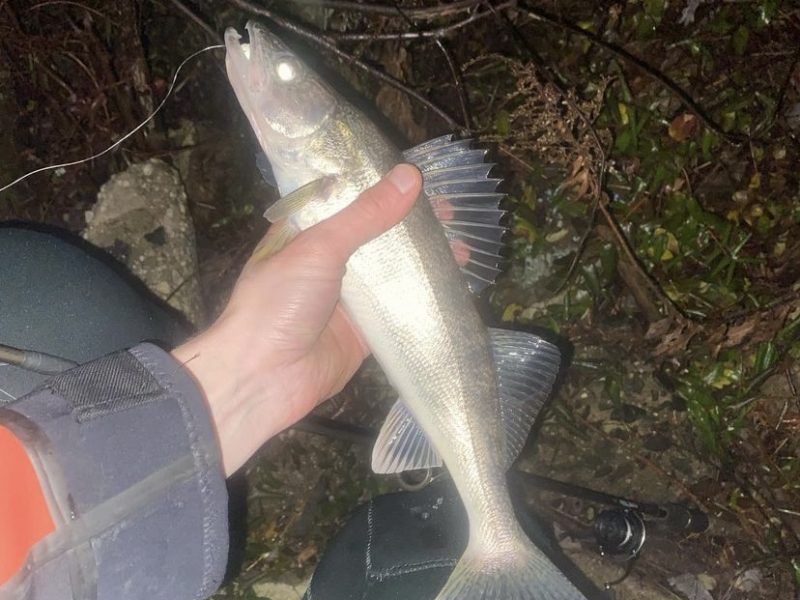 It’s mid-January, and winter has finally creeped it’s way across the entire Northeast coast. Overnight cold snaps and skim ice have made it a discouraging week for many anglers to even attempt fishing. For others, the itch persists, but getting a bite isn’t always guaranteed. It’s the time of year where you have to find enjoyment in just being outside, but even that can be difficult with frigid temperatures.

The head boats around Long Island this week have docked up since black sea bass season closed on December 31st, with the exception of the Laura Lee Fleet out of Captree. The Laura Lee just cancelled their Saturday wreck outing due to wind, weather and extreme cold, but they’re hoping to keep this Sunday open.


Offshore aside, there are still local options for the fishermen out there trying to pass the time. Back bays, estuaries and some open freshwater options can yield a fish or two if fished during the right times. As we’ll find, sometimes, night time is the right time.

Frank at Chasing Tails Bait and Tackle in Oakdale reported that the stocked trout in the Connetquot are a safe bet for local fly guys. Chasing Tails sits directly next to the Connetquot River system, so if you’re looking for the inside scoop, stop in for some flies and intel from Frank or Bill.

Remember, the Connetquot River is open to fly fishing only, by reservation only. If you want to give the spinning tackle a try for trout, Bubbles Falls (situated just South of the main river) usually hold some fish that can be targeted with trout magnet, or hook and bobber with a nightcrawler.

Frank from Chasing Tails also reported the Carman’s River being loaded with holdover bass right now.  According to Frank there’s plenty of small bait around, so downsize those soft plastics and try jigging slowly along the bottom. You may even find a few chunky white perch in the mix when targeting holdover stripers. If you can find shoreline access, this is a fantastic option for winter fishing. On warmer days, the Carman’s River is a great place to target holdover bass from a kayak through the duration of winter.

White perch can be targeted with hair jigs and small grub-tail soft plastics in brackish water, and in areas similar to where you’d find holdover striped bass. Even some freshwater spots around Long Island hold these tough little brutes.

Further West in Nassau County, similar reports came in from Paul McCain at River Bay Outfitters in Baldwin. The Connetquot River has a steady flow and won’t freeze over as easily, and as a result fly fishermen have seen success with mostly rainbows, and a few brookies in the mix.

Paul is no stranger to a quick road trip, and recommends that Long Island anglers take a brief drive North to Westchester County for some quality trout fishing. The area just North of New York City is littered with reservoirs and streams that are stocked with trout. In Westchester streams, Paul finds that the best method for success this time of year is nymphing deep and slow along the riverbed.

If you prefer to stay close to home, try planning a fishing outing around the weather forecast. Local, shallow ponds will thaw out relatively quickly, leaving pickerel, bass, yellow perch and stocked trout as possibilities. In Hempstead, a recreational walkway along the Mill River is being constructed, which will provide more accessibility along the entire waterway for anglers. Once completed, anglers should be able to target white perch, carp and even river herring in this creek. The Mill River begins in Hempstead, and flows South through Hempstead Lake State Park and eventually out into Bay Park.

Sometimes, all it takes to keep things interesting is just changing up the approach. For dedicated striper anglers, the creek holdovers just aren’t enough to satisfy. During the winter, I go through withdrawals of excitement that come from fishing the late hours of the night for stripers all Spring and Fall. Luckily, there is an option for anglers that need something to go thump in the night.

Walleye, or “green weakfish” as they’ve been called by striper fishermen, are a unique species to the Island. Annually stocked walleye in Lake Ronkonkoma, they provide the wintertime night shift angler with a pretty solid fishery. While easily spooked and sometimes finicky, walleye use their big eyes to follow bait into shallow water after nightfall.

Sean Conway of Saint James, Long Island is one of the few who can’t get enough of targeting these late-night L.I. exotics. He’s been fishing with small, white paddletails and silver soft plastics in Lake Ronkonkoma to imitate white perch fry, the exact species that are the reason behind the lake’s annual walleye stocking. But Ronkonkoma isn’t the only place that holds walleye.

If you’re located further East on Long Island, Montauk’s Fort Pond holds walleye. If you’re not willing to try for them in shallow at night, a cloudy day in churned-up water is the next best thing. Anything that closely mimics a white perch will do; Rapala jerk baits, lipless cranks, blade baits and soft plastics in variations of white, silver or gold are some of the best options for the toothy ones. For example- the fish shown by angler Jason Brunder, below, came on a Rapala X-Rap.

Now that the water has begun to freeze across most of the lakes and ponds, fly fishing creeks and taking mini-road trips provides good fun when fishing with friends. As we march on through January, keep an eye on the temperatures and days with sunshine; all it takes is one or two warm days to thaw out your favorite local bass pond and then it’s game on. Otherwise, try the brackish waters and some night fishing on Long Island’s biggest lake.

This weekend’s temperatures have anglers across the Northeast hopeful that the water will freeze enough for safe ice. If we get safe ice, yellow perch, bass and pickerel through the ice will become a popular first choice for many. Be sure err on the side of caution when judging ice for safety; 4 inches or more is generally safe. Otherwise, you can tell it’s officially ice season from a quick drive by Lake Ronkonoma- home of the walleye, and the largest freshwater body on Long Island.

Stay safe and stay warm out there, Islanders!