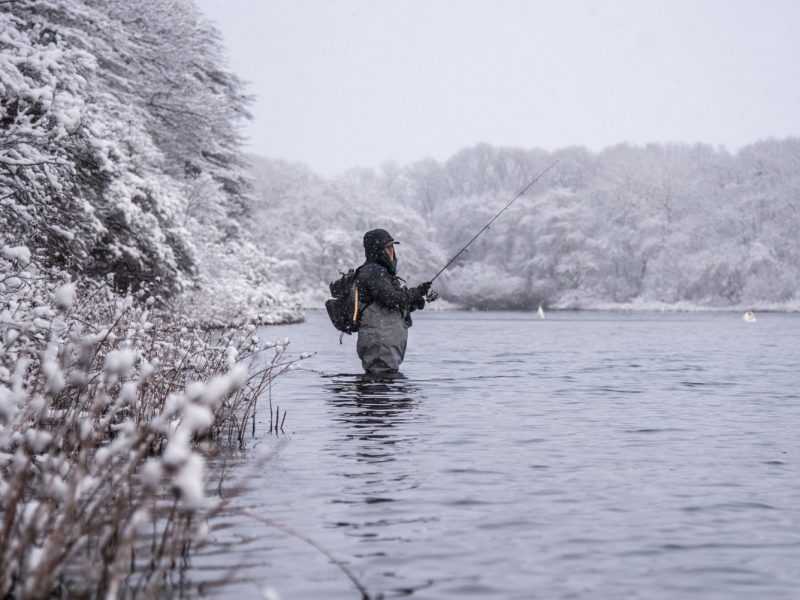 This past Friday we had our first snow of the season on the Cape, and it was a sight to see. For about a day, heavy snow layered over the frozen ground, and decorated the trees with a perfect dusting of white. The beautiful conditions bestowed the perfect opportunity for some prime winter fishing before the ice formed at night. Lunchtime on Friday quickly became “fish ‘o’clock” for myself, OTW Editor Jimmy Fee, and OTW TV’s Andrew Burke.

The fishing was slow, but we managed to pull in a few hungry ones. Funny enough, Jimmy and I doubled-up on two separate instances; small largemouth bass and a few chain pickerel kept us busy. In the cold, Jimmy likes to use the “float-and-fly” method which consists of a small hair jig suspended under a bobber.

However, I have continued success fishing the 1/4 oz. gold kastmaster in both small ponds and big lakes. I find that it works well in cold temperatures fished  slowly and close to the bottom, or fluttering just over the tops of weed beds with an occasional twitch. Due to the classic lure’s continued success in all waters since my arrival on Cape Cod in November, I’ve deemed it “Ol’ Reliable”; a gold kastmaster will forever have a home in my tackle box.

As the snow melted off over the weekend, I thought the bite might pick up for a bit. But where there wasn’t skim ice, there was instead snowmelt from the banks changing the surface temperatures in shallow water. I had no success fishing for trout in my usual spots, which was discouraging; rainbow trout especially, have provided a reliable bite up until the drastic cold snap we experienced this week. In order to catch, it’s going to take some finesse presentations, and some very, painfully slow-moving lures.


The Fee favorite “float-and-fly” (say that 5 times fast), is a great option when fishing in extreme cold. This rig creates subtle movements of the hair jig suspended in the water column, and may draw in a weary trout looking for an easy meal. If you can find a shoreline without ice, fling a float out there. The best way to locate open water is to bundle up and scout the windblown sides of a few bigger bodies of water, to avoid surface ice. Small ponds will likely be partially, if not entirely frozen- but the bigger kettle lakes have some open water for anglers in search of trout.

In my unsuccessful endeavors, I bumped into a couple of lucky anglers who had caught a few rainbow trout. They fished lightly weighted bottom rigs using split shot sinkers, and each hook was donned with a ball of nightcrawlers. The two had found open water by fishing with the wind in their faces to avoid still water, and seemingly, the only way to succeed was to leave a bundle of worms untouched along the bottom.

The fluctuating temperatures make it difficult to find a place to fish, and successfully catch. This weekend looks like we’re going to have overnight air temperatures in the single digits again, which makes me hopeful that we’ll possibly see some good ice form (and hopefully hold).

For now, I like to take the extended time indoors to organize my tackle for the saltwater season. It’s a great time of year to focus on preparation for the coming season; you might find that re-spooling line onto your favorite surf rod get’s you juiced up for some early Spring fishing. If you’re like me, you can even take the opportunity to scout out some new fishing spots. I’m still “new” on the Cape, and I don’t want to be searching for places to fish when that first wave of stripers arrive in April.

It’s amazing how much can change in a matter of seven days. Freshwater fishing had been relatively consistent before the air temperatures reached 7 degrees this week. Until we experience a bit of consistency in temperatures, whether warmer, or cold enough for safe ice, the best bet for a tug on your line is finding trout in big open water. Personally, I’ve never gone ice fishing so I’m hopeful that some ice will form during the weekend’s single-digit evening temperatures.