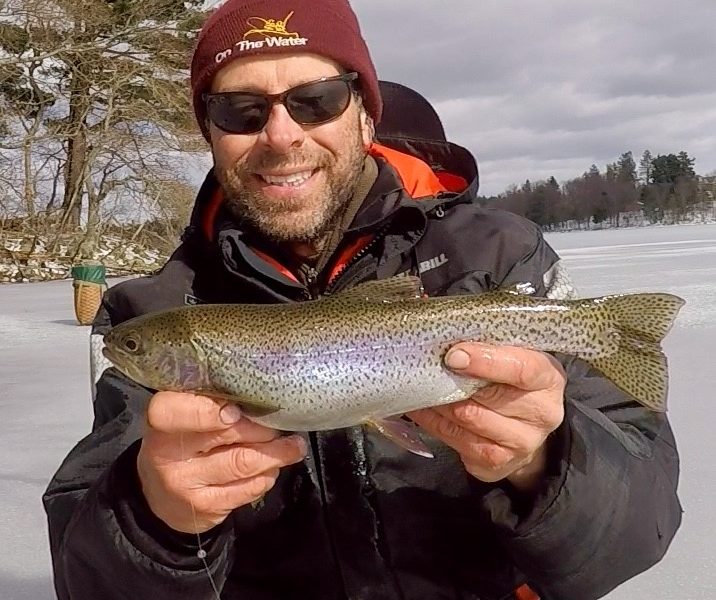 Above: Fishermen should have no problem catching their first fish of the year this weekend – especially if they target trout!

While there has been hardwater opportunities in northern New England, it all gets real after the New Year when regulations loosen up, especially for trout! Meanwhile pike make for an interesting supporting cast with some corkers already being iced from a Maine river.

Michael from the Tackle Shack in Meredith New Hampshire said that next week’s frosty forecast should usher in a slew of safe ice spots around the Winnipesaukee area and – who knows – some of the coves just might catch on the big lake! Meanwhile, you can get your frozen water fix among the Connecticut Lakes which reportedly all have at least 4” of ice. Some shop regulars have found cooperative brook trout from White Lake in Tamworth. Reports from TJs Bait in Pittsburg support that news with reports that the First, Second and Third Connecticut Lakes, as well as Lake Francis, all have between 4” and 8” of ice. Everything from pike to cusk to trout swims among that watershed and the shop stocks smelt to suckers to handle it all. Tim Moore from TimMooreOutdoors is one of the Granite State’s most accomplished guides, and ice fishing Winnipesaukee for slab white perch is one of his specialties! The scuttlebutt beyond mere skim ice is that Pleasant Lake in Deerfield has ice with trout the quarry. As is always the case, never take ice thickness for granted. Buddy up, chip your way out to your fishing destination every few feet and toss a set of ice picks around your next to help you grip the ice in an emergency.

As usual Dag’s Bait in Tackle in Auburn is the first to herald in the hardwater season with pike reports especially promising. Scotty told me that one angler in a span of only a few minutes caught three big pike up to 19 pounds from the Androscoggin River!  Plus, the hot traps were all within 5 feet of each other! Pike-filled Sabbatus has safe ice and solid reports of pike as well. The “Ranges” as well as the Otter Ponds should all be good to go not long after the New Year. Scotty of Dag’s is another top-rod guide to consider. Other shop contributors once ice is more prevalent will be Sebago Bait as well as Saco Bay Tackle. Next week’s frosty forecast should be just the game changer we need!

Finally, there are a smattering of ice fishing options, and if next week’s forecast holds true those will increase significantly! Considering that for many water bodies rules change dramatically as of the first of the year, timing should be perfect. Meanwhile have a safe, happy and fish-filled New Year!