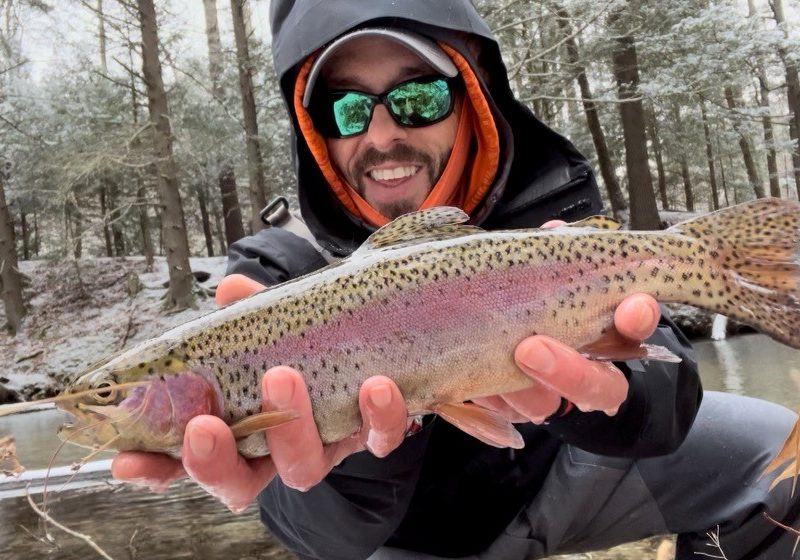 Above: Until hardwater is prevalent, trout, river pike and trout remain the top target. Patrick Barone with a fine Swift River rainbow!

Chances are that if you have a hardwater habit, frozen puddles, skim ice and the constant tease of “next week” just aren’t’ doing it for you. While there is some relief out west, plenty of ice awaits up north and with that in mind we’re rekindling the north-of-the-border report! Meanwhile most Massachusetts anglers will have to make do with trout and a panoply of warmwater species.

The saltiest of customers of Belsan’s Bait and Tackle have been taken to launching Kastmasters, Daddy Mac Elite Casting Jigs, Deadly Dicks and other far-flinging lures off the South Shore shoreline in the hopes of connecting to any form of life in the salt. While a wayward pollock or mackerel would be greeted like a world record catch most are simply keeping the casting reflexes sharp.

However, there will be a few diehards, who apparently have very understanding significant others, who will ring in the New Year with a striped bass! For the rest of us who spend enough time in the dog house in season, we’ll have to make do with warm water sweetwater species as well as trout.

Pete’s picks of the week are the Scituate Reservoir, Cohasset Reservoir, Jacobs Pond and the pond at Widow’s Walk Golf Course The latter is noteworthy for fast acton with generally small bass. A bucket of shiners won’t last long there! Regarding picks by Pete, Pete Santini of Fishing FINatics told me that the Connecticut Lakes in New Hampshire are frozen and reports from TJs Bait in Pittsburg are that the First, Second and Third Connecticut Lakes, as well as Lake Francis, all have between 4” and 8” of ice. Everything from pike to cusk to trout swims among that watershed and the shop stocks smelt to suckers to handle it all.

As for local luck, shiners or blown-up worms on the bottom for browns at White Pond is a top choice. As for Bay State ice, Jim from JCB Bait in Cheshire told me that there actually have been a few “crazies” creeping out on very thin ice on Cheshire Reservoir but Jim does not recommend it.

With the warm weather predicted this weekend the prudent thing is to wait until the expected freeze blows through next week. Meanwhile if you’re just yearning for a frozen water fix, ice among many of the Berkshires ponds is just fine. Some of the shop regulars are reporting good brown trout action from North Pond.

As for other western options the west branch of the Swift River continues to give up beautiful bows for Captain Patrick Barone of Charter The Berkshires. In between Patrick is putting plugs in front of pike in the South Hadley section of the Connecticut River. When pike are the target in the eastern portion of our state, Merrimack Sports is toothy central!

David told me of a shop stalwart who suffered a heartbreak recently as a tank of a pike relieved him of his X-Rap as he fished the Merrimack River. If he had to pick one section to put in your time, he’d select the ribbon of access between the Greater Lawrence Yacht Club and the Greater Lawrence Regional Trade school. When water temperatures drop to the current level, slow and steady may be the best retrieve but the best bet will always be bait. Dovetailing nicely with that is the shops plans to carry magnum sized shiners as of this Thursday!

For those who prefer celebrating the New Year with ice underfoot as opposed to in a glass, the only options are the Hilltowns or across the northern border. For the rest river rainbows and pike are two of the better bets. While saltwater alternatives for most are relegated to the “see you in the spring” category, the rush will be on for a few to be the first to hook a 2022 linesider! My money is on one of the Greater Boston rivers and I bet it’ll happen under cover of darkness not long after the clock strikes midnight! Have a safe and wonderful New Year one and all!