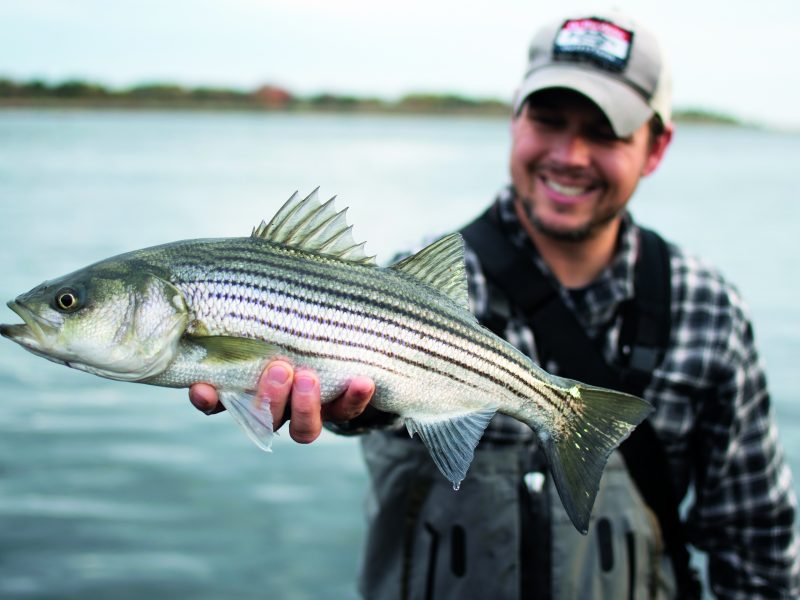 Striped bass have been the main player on the scene with trophy bass being caught on live bunker, plugs, and trolled mojo’s.  Most of the action has been from Seaside to Brigantine and from the beach to the 3 mile line.  There are a few fish in the 28- to 38-inch range, but a good portion have been 40 inches and over.  A quick recommendation with most of these bigger striped bass, it is important to support their vitals by having one hand holding the mouth and the other supporting their bellies when taking photographs.  The best way to try not to take the fish of this size out of the water or minimize the time out of the water as the lactic acid build-up can kill the fish.  Togging has been extremely active for short tog from most of inshore wrecks, but there are keepers to be had if you work for them.

Lacey Marine in Forked River had solid reports coming from the beaches of Island Beach State Park out to the 3 mile line on trophy sized striped bass on bunker, plugs, and trolled lures.  Most of these fish have to be released, but they are great for pictures.  The jetty and some of the reef site wrecks are holding good numbers of short tog and sea bass.  With the winds and seas this past week, there wasn’t much word on offshore action.

Creekside Outfitters in Waretown reported another solid week for striped bass on the troll and on live spot around the inlets of Long Beach Island.  Tog fisherman are working green crab baits are finding lots of shorts along the jetties.  There are a few keepers around, but you definitely have to go through a lot of crabs to find them.

Reel Reaction Sportfishing out of Waretown/Barnegat Light got back to fishing the back bays after the short Florida hiatus.  The skipper took the skiff along some of the back skinny areas to release a dozen striped bass to 24 inches in a little over 2 hours.  The charters have opened a few more weekday dates, so give a call if interested.

The Super Chic out of Barnegat Light has been busy running striped bass trips over the past week when the weather has allowed it.  The boat has found a few nice piles of striped bass in the 40 inch range which are great for pics and fish along the inlet for filling the bonus tags.

Tony’s Bait & Tackle in Manahawkin had some reports of striped bass along the back estuaries and bridges on 4-5 inch soft plastics.  Z-man, Bass Assassin, and DOA lures have been excellent choices for these bass which are mostly in the 18- to 24-inch range.  Tog fishing has been very active on short tog from the jetties and inshore wrecks with S&S Tog jigs tipped with green crab.  Striped bass to 48 inches have been released along the 3-mile line off IBSP and LBI.

One Stop Bait & Tackle in Atlantic City reported good tog fishing off the jetties of Atlantic City with green crabs and tog jigs.  Although many are undersized, there has been a ton of tautog caught off the jetties, so bring a bucket full of green crabs.  Keepers to 18 inches are around, but you have to work for them.  Anglers fishing the beach are finding more striped bass, and some have been up to 30 inches.  The number of striped bass caught off the beaches and bays has definitely increased from last week.

Tackle Direct in Egg Harbor Township had good reports out of Longport and Margate for striped bass to 26 inches.  Most of the bass are smaller, but there have been a few fish to 30 inches in the mix.  Night-time bridge fishing has been the best with working the sod banks of some of tidal rivers a close second in terms of quantity of bass.

Tight Lines Bait & Tackle in Somers Point received excellent reports of bay striper action around Corson’s inlet with fish in the 18- to 26-inch range.  Soft bait plastics, live spot, and eels have been doing most of the catching during the night tides.  Tog fishing still remains phenomenal from the jetties, bridges, and inshore wrecks for boaters.  The shop is loaded with fall baits, and receives new shipments daily.

Captain Brian Williams of Badfish Charters reports that the warmer weather and abundance of bait has the bass still on the flats crawling on their bellies in a foot or less of water. Peanut bunker were still on menu early week with some surface feeds and cool visuals but now seeing a transition over to more smaller baitfish fish fry and grass shrimp. And they’re beginning to show signs of getting ready to channel up and setup for the jig bite as temperatures cool more. Brian has openings in the next week for anyone looking to get in on this fun catch-and-release fishery.

Sterling Harbor in Wildwood reported good action along the sod banks from Wildwood to Cape May on striped bass to 14 to 30 inches.  Some of the bridges have been hot too, but you need good tide and some wind to get them biting.  Soft plastics, eels, and live spot have been good over the dark periods.  Anglers searching out tautog have been finding lots of shorts off the local bridges, but keepers are a slightly harder to come by.  The shop recommends bringing lots of green crab baits.

Cape May Bait & Tackle in Cape May had solid action reported from anglers working 4 to 5 inch soft plastics along the local sod banks and bridges during the times of dusk.  Most of the striped bass have been between 15 and 30 inches.  Anglers working some of beaches – Cape May Point, ferry terminal, Poverty beach are finding success on striped bass to 26 inches.  Tog fishing from the jetties remained excellent on green crabs.  Sea bass fishing has been tough for keepers, but anglers working the deeper wrecks have found good numbers of fish above 13 inches.

This weekend looks fishable and the best bet remains fishing in the bay or surf for striped bass as there has been a dramatic uptick from IBSP south to Brigantine.  As stripers migrate south, our southern jersey areas should begin to light up.  Anglers in the Atlantic City areas should try trolling along the 3 mile line as some of those big 40-plus-inchers may have made it down.  Most of the back bays provide plenty of backbay striped bass action on 4 to 5 inch soft plastics and a variety of brands will do the trick.  Tog fisherman can still have lots of fun off the jetties and bridges with green crab tipped on traditional rigs or tog jigs.  Remember, the season opens up next week for tautog, so use this weekend to sharpen your game.  Good Luck, Be Safe, and Tight Lines!