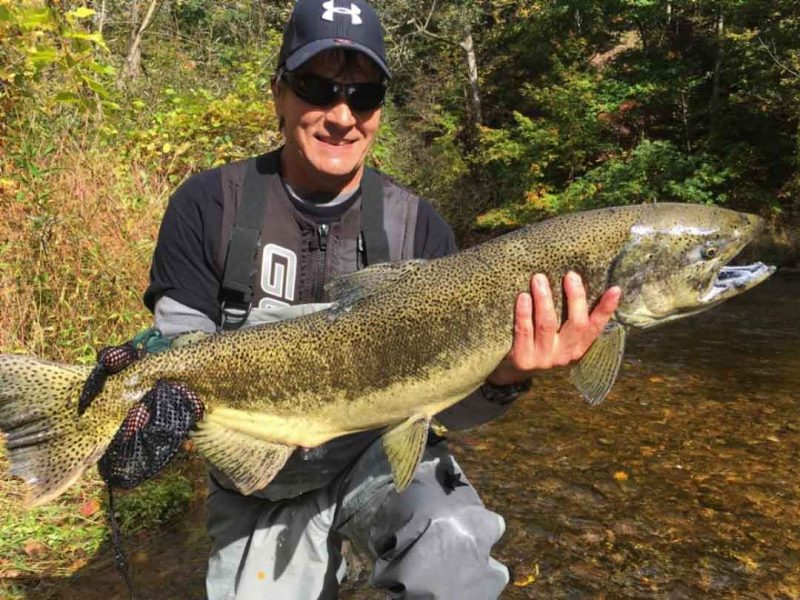 With the full moon arriving today, fall fishing is moving into a transition period for a variety of species.

The rain last week triggered runs of fish in nearly all of the tributaries big and small, stocking or no stocking. The creek at Olcott (18 Mile) is muddy but there are loads of fish around according to Karen Evarts at The Boat Doctors in Olcott. Salmon are stacked up in Olcott Harbor and spinners are working for shore casters. From a small boat, drifting treated egg skein is a good approach to try, fished under a float. Both kings and Cohos are being caught. Dam action has been spotty, but there are people hooking up. Eggs, egg sacs and beads are working to take salmon, brown trout and the occasional steelhead. Some Northern pike can be caught in the harbor, too. Over in Wilson, the recent rains actually pulled some salmon into 12 Mile Creek and salmon and trout are being caught off the piers there, as well. Be sure to check out some of the smaller tribs like Four Mile and Keg Creeks.

In the Niagara River, there are some salmon still swimming around the lower river if you want to work for them, both from shore and from boat. Trout action is starting to improve according to Lisa Drabczyk with Creek Road Bait and Tackle. Sacs are working for trout and skein is the ticket for salmon. Bass action is spotty. According to Capt. Jim Gordon of Appleton, you can go out and do extremely well one day with goldens and then return to the same spot with the same bait the next day and struggle to catch a fish. A few more lake trout have shown up in the river to do their spawning ritual. Remember the season is closed until Dec. 1. If you catch one, please release it immediately and not harm it. Mike Ziehm of Niagara Falls reports that he is still getting some salmon and walleye from shore in the gorge casting spinners and jigs. Water visibility was about 6-foot at the time.

Report is Courtesy of the Oswego County Department of Community Development, Tourism and Planning

The following report is courtesy of Capt. Andy Bliss of Chasin’ Tail Adventures:

Notice: with water levels over 16000 CFS as of today, wading isn’t advised.

With the heavy rains we received the past week and more on the way it doesn’t look like it will be coming down anytime soon. The fishing has been challenging not least due to the warm weather we had last week. But with cooler temps this week, the water temp has finally started dropping. As soon as the levels come down more trout will show up.

Beads in natural colors really shine on early season trout with all the salmon eggs around.

Please check our website, at visitoswegocounty.com, for the current CFS.

Year-Round Notice: There are mandatory personal flotation device (PFD) zones on the river. For more information, visit our website at visitoswegocounty.com and click on the Fishing Report along the top bar on the home page. The Oswego Fire Department offers loaner life jackets at no charge through its “Loaner for Life” program. For more information contact the fire station at 35 E. Cayuga St. by calling 315-343-2161.

The river flow has increased with the rain this week. Temperatures have finally started dropping with cooler weather setting in.

The end of the annual salmon run is coming to an end in the upper salmon river. Fish are still spawning in the typical areas on or near gravel. The smaller side channels and Trout and Orwell brook all have fish; which are providing the most action at this time. Flies and egg imaginations have been the best baits for the salmon. As the cooler weather continues, expect to see a large influx of both steelhead and brown trout moving up stream to feed on the remaining salmon eggs. The more the water temps drop, the more active the trout will become.

Our final report is courtesy of JCapt. Tom Burke of Cold Steel Sportfishing:

After a good rain brought river levels up, a majority of the salmon in the lower river and estuary have moved toward the upper river. There are now very small spurts of kings coming through. A few leftover coho and browns are in the system too. The exciting news is that the beginning of the fall steelhead migration has started, although its be a slow process given the mid October heat wave!

If you still have a boat in the water, you can fish west of Sodus Bay in 30 fow. Some steelhead and cohos were caught with spoons.

Lake effect rain dumped three inches of rain around the Port Bay area over the weekend. The Wolcott Creek off Furnace Road had some late season kings. Maxwell has a better flow; however, it is still plugged-up at the mouth.

Pier fishing continues to be the place to cast in Wayne County. The Port Bay pier (small) is at the end of West Port Bay Road and the Sodus Bay pier (long) are places to cast out heavy spoons. You can catch steelhead and some browns. The trout follow the salmon looking for an egg meal.

Bass fishing in Sodus has been excellent. The season ends November 30th with a catch and release from December 1st till June. (Artificial lures only)

Fish for perch in Sodus Bay near the north end breach, next to Bonnie Castle and Oak Park on the east side and the west side next to the old malt house.

Canal water is a decent level. The canal season for navigation ended October 13th and some sections are being lowered. Widewaters is never drawn-down and is the hot spot for bass this time of year.

The 2021 New York State fishing guide can be found at https://www.dec.ny.gov/outdoor/7917.html for downloading and printing at home. Production of hard copies is finished and have been delivered to License Issuing Agents. Hard copies can be requested by emailing FWFish@dec.ny.gov.

Keep informed from the NYS Canal web for changes and restrictions with canal waters. Keep informed about 2021 canal hours. (There will be no fees for the 2021 canal boating season.) May 21st is the scheduling for the canal opening. Hours are 7 am till 5pm. Stay informed with the below web page.

While enjoying the outdoors, please continue to follow the CDC/New York State Department of Health guidelines (leaves DEC’s website) for preventing the spread of colds, flu, and COVID-19:

When fishing, DEC recommends avoiding busy waters and following the guidelines on DEC’s website about fishing responsibly in New York State. If an angler arrives at a parking lot and there are several cars, they should consider going to another parking lot. If an angler is fishing upstream, they should fish downstream of the other angler or consider fishing another day. Anglers fishing from boats should be able to maintain at least six feet of distance between one another. For more information about the benefits of being outdoors safely and responsibly, go to DEC’s website.

New York State is open for fishing and DEC encourages anglers to recreate locally at a nearby waterbody. New York’s lakes and streams offer great opportunities for fishing in a wide array of settings across the state. Even during the current COVID-19 public health crisis, getting outdoors and connecting with nature while angling in New York’s waters is a great way to help maintain mental and physical health.

This week’s report is from Ron Bierstine from Oak Orchard Tackle & Lodge:

The last shot of rain was Sunday and there’s been some cooler weather for the beginning part of this week. Now for the mid week, it’s warmed up again! But no worries the nights are cooler now and we had our coolest night yet of the season last night – into the 40’s F. Chance of rain showers Thursday and again for the weekend.

All the trib flows are on the retreat from the last rain. Most noticeable drop will be the Oak since the Canal flows are also throttling back. Less noticeable will be in Sandy since Canal flows there are throttling up. Johnson Creek had a nice bump in flows and got stained and guys reported some salmon on the move there. Otherwise it’s a little tough to report on average fishing conditions. I’d say I’m hearing about 50/50 in good/tough fishing. Seems like the Kings just aren’t concentrated in any particular fast water spot in any trib and that’s the tougher reports I hear from guys. The better reports I hear are from guys that have some Kings migrate past them or hold and they get some drifts to them.

There’s been on and off good action like at the Archer’s Club and some Kings continue to drop back from the dam. And then there’s always that concentration of fish and people at the dam. We’ll probably continue to see a drawn out salmon “run.” There’s not a lot of fish spawning or even many zombies yet so that tells you things are progressing slowly. No doubt we’ll have concentrations of Kings into November.

We are hearing of a few more browns now in the Oak, especially thru yesterday. Slightly lower flows will likely reveal more browns then thought when the water was higher.

Cooling weather and water will also help bring on better brown trout and steelhead action and the area is not likely to suffer thru any more real warm weather now that we are well into October. Hopefully… the fishing pressure overall is likewise spread out like the fish. A few guys report crowding, but as compared to say last year I’d have to say there are a few less guys out and about. A good WNW wind thru last night probably moved more fish near shore or into the tribs from Lake Ontario but don’t look for those fish to loiter in estuary or rivermouth spots at this point in the season.