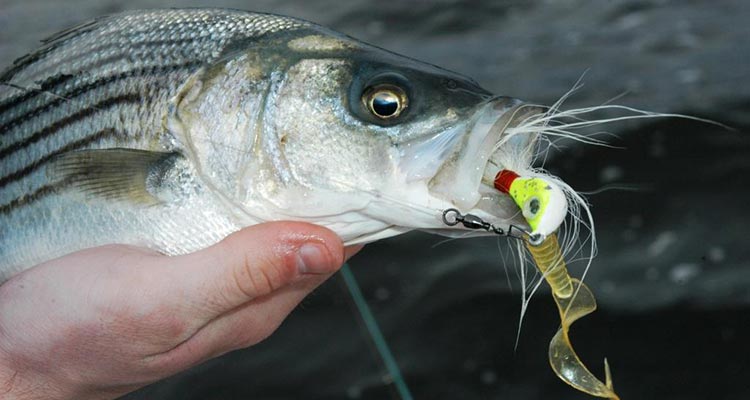 The past weekend was one of the tougher ones with sustained easterly winds to 30 knots going from Saturday through mid-week. The winds and seas kept most fisherman at home, but a few hardy souls did attempt to fish just as the winds ramped up. Bluefish and a few striped bass on plugs were caught with regularity from the beaches of Island Beach State Park (IBSP) as mullet are still exiting the bays. Ocean conditions put the brake sea bass fishing, but good fishing was reported prior to the storm. Bayside stayed strong with lots of striped bass bites along the tidal rivers from the Mullica to Egg Harbor. Most of these fish have been landed on Gulp baits or bucktails tipped with rubber tails. Hopefully, Mother Nature throws us a couple of bones in the coming weeks.

Lacey Marine in Forked River had few reports other than some tog being landed off the Barnegat Inlet jetties on green crab. The inlet has been rough to fish, but anglers making it out late mid-week reported some bluefish and small bass off the north side. One of the local draggers ran aground towards the southern end of IBSP and has been getting hammered by waves and tides.

Creekside Outfitters in Waretown reported a slower week in terms of fishing as the weather didn’t cooperate. The LBI surf has had some action with bluefish on mullet and kingfish on Fishbites as the water is still in the high 60’s. The bay still has a good number of blowfish around, but you need to chum heavy and work through the smaller ones.

Reel Reaction Charters out of Waretown and Barnegat Light was cancelled over the weekend due to winds, but the crew made it out late mid-week. Due to the swell, the charter stayed in the bay and boxed over 75 blowfish along with a nice triggerfish that came into the puffer slick. The boat is booked solid for the weekend and will be targeting sea bass if mother nature allows.

The Super Chic out of Barnegat Light was tied to the dock over the weekend, but made it out mid-week for bottom fish. The sea bass charter did alright, although the swell had the fish off the bite. The boat is taking out the crew of the Southern Regional High School fishing team later this week for sea bass.

Tony’s Bait and Tackle in Manahawkin had slow reports for the ocean and surf this week, but the bay had some action on blowfish, small weakfish, and striped bass off the local bridges. The bay water has been dirty due to the weekend blow and the striped bass bites have been off at the inlet and sods.

One Stop Bait & Tackle in Atlantic City reported a slow weekend, but the fishing bounced back quickly with anglers boxing a good number of kingfish and some weakfish off the jetty and surf later in the week. Striped bass and bluefish have been slower over the week from the surf and jetties, but anglers are getting 2 to 4-pound blues in the back. Striped bass have mostly been schoolies caught along the back sods and jetties of Atlantic City.

Tackle Direct in Egg Harbor Cityhad good reports coming out of the Mullica and Egg Harbor rivers with anglers fishing the sods and bends in the tidal creeks are finding cooperative striped bass to 26 inches. There are lots of fish in the 12 to 20 range which are great on light tackle.

Tight Lines Bait & Tackle in Somers Point got a load of fresh bunker and soft plastics as the backwaters have lots of schoolie striped bass action to 28 inches. Soft plastics, especially the Gulp Nemesis, have been very good on the bay bass. The surf was quiet over the weekend due to the storm, but kingfish have been caught over the past 2 days with better conditions.

Sterling Harbor in Wildwood reported a slow weekend and early part of the week due to the recent storm. The water will take a few days to clean up and the bass should be getting back on the feed. Sea bass fishing was excellent pre-storm and should rebound later this week. Double clam rigs and jigs are the way to go for keeper sea bass.

Cape May Bait & Tackle in Cape May received a full shipment of green crabs, bloodworms, clams and bunker over the past week. The fishing reports have been scarce due to the weekend blow, but anglers making it out late in the week reported fishing has rebounded. Kingfish and some croakers have been caught on bloodworm and Fishbites from the surf over the last few days. Three to five-pound weakfish and small striped bass continue to be caught around the bridges, jetties, and in the harbor during the nighttime tides. Sea bass fishing has been producing limits of fish on the offshore, deeper wrecks.

The weekend looks “iffy” again with winds from 15 to 30 knots predicted for Saturday and Sunday, so most boat action would probably be slim to none. The best bet for anglers would be to have fun with some catch-n-release tog at most of our jetties and rock-lined inlets. Cut green-crab or Asian shore crab are great baits to target keeper tog. Anglers can keep one tog, so work through a bunch to find a keeper for dinner. The other “bet” for the weekend would be to target some of our bridges in South Jersey to find cooperative weakfish and striped bass. The key to fishing these areas is working soft plastics along the light lines and with the tidal current for your best shots at fish. Good Luck, Be Safe, and Tight Lines!