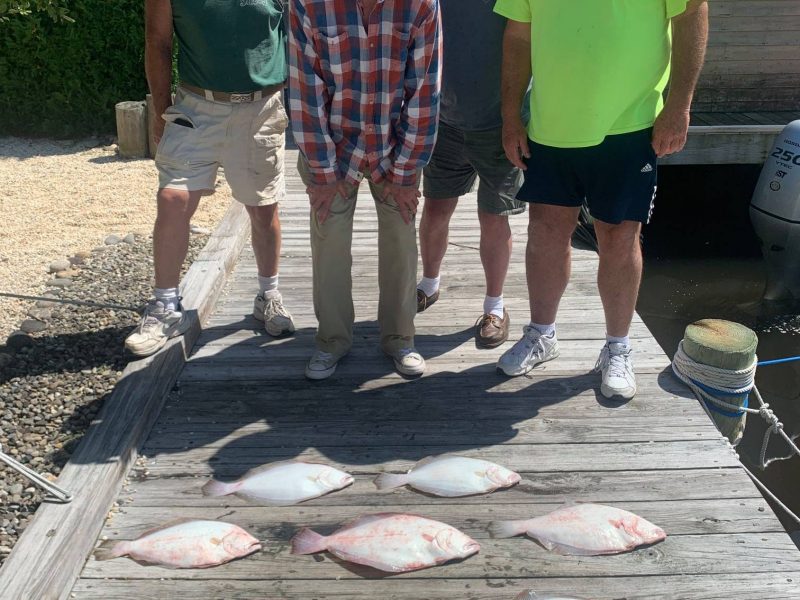 The amount quality keepers has been incredible over the past week, but the only issue has been the tropical systems affecting New Jersey.  The reef sites from the Axel south to the Cape May reef have been firing on all cylinders.  Anglers able to find small weather windows have been bucktailing keepers to 6-7 pounds on Gulp and natural baits.  Bay fisherman have been finding some weakfish on soft plastics and September is the perfect time as they will feed on migrating peanut bunker and mullet.  The inlets, bridges, and rockpiles have good numbers of tautog which can be targeted with green crabs.

Lacey Marine in Forked River had good reports of fluke being caught from reef sites on the S&S Raging Rattler over the past week.  Most of the keepers reported have been caught in the ocean as compared to the bay.  The bay is still alive with lots of tasty blowfish and there are some keeper weakfish being landed inside and schools of spikes outside.  The canyons are still holding good numbers of yellowfin, but it’s been tough getting out there.

Creekside Outfitters in Waretown reported good crabbing and clamming this past week from the passing New Moon.  The stronger tides and winds made fishing tough in the bay, but anglers working both sides of inlet have been able to find fish.  There are tons of bait around the bridges leading into Long Beach Island and there are a few bluefish and striped bass on them.  Most of the bites have been occurring past midnight on soft plastic shads.  There weren’t too many offshore reports this week, but the shop has been busy selling 9’er rigs for the approaching striped bass season.

Reel Reaction Sportfishing in Waretown/Barnegat Light was busy running trips over the Labor weekend and the past week.  Ocean trips have been excellent with keepers averaging 6 pounds and 4.5hr trips producing up to 8 keepers.  Bay trips have been much tougher as the water clarity and ripping currents has impacted the bite.  The skipper has a few dates left for Tog and Striped Bass.

The Super Chic out of Barnegat Light has been doing well on their ocean flounder trips and some of the offshore yellowfin trips have produced good numbers of tuna and mahi.  The skipper said he has been busy booking fall striped bass trips and the website has been updated with booking calendar.

Tony’s Bait & Tackle in Manahawkin reported excellent blowfish action occurring in Barnegat bay on cut clam.  Chumming heavy and finding spots away from the fleet has been better for some of the bigger ones.  Fluke fishing in the bay has been best around both inlets, but much better in the ocean.  Anglers running to the southern reef sites have been doing better with limits of fish coming over the rail.  Togging has been good at Barnegat inlet, but you have to work through a good number of shorts to find one-fish limit.  The Toms and Lindy canyons have been pretty good for yellowfin and mahi, but the tropical systems have not been too nice to pelagic anglers.

One Stop Bait & Tackle in Atlantic City had good numbers of tog hitting crab baits tipped on Magictail tog jigs over the past week.  The AC jetties have been the spot for lots of tautog and there have been a few keepers in the mix.  Small bluefish and the occasional striped bass or weakfish have also been hitting baits.  The surf was a bit rough, but some hardy anglers reported kingfish and spot hitting on Fishbites and bloodworms.

Tackle Direct in Egg Harbor City reported good action off the Brigantine, Atlantic City, and Ocean City surf on kingfish, spot, and small bluefish.  The issue has been the increased wave heights due to Larry, but once it subsides anglers should be able to get back in the action.  Areas close to the inlets are producing some keeper flounder, especially around the Longport bridge during the slack high tides.  Live spot or snapper blues have been best for the bigger fish.

Tight Lines Bait & Tackle in Somers Point had a few anglers hit the offshore grounds to report excellent action on mahi to 21 pounds and wahoo to 40 pounds.  The pots have been good for mahi action and live spot or peanut bunker work well for bigger mahi.  The ocean reefs have been excellent for keeper fluke, especially on the Atlantic City and Ocean City sites.  Bay action has been slower, but anglers dragging live spot are producing the best results on keeper fluke.

Sterling Harbor in Wildwood reported quality fluke fishing again this week with keepers to 8 pounds being landed at the Wildwood, Cape May, and Reef site #11.  It’s been tougher to get out with the winds this past week.  The inlet jetties and rocks have been loaded with good numbers of tog.  Green crabs have been the bait of choice on a small 3/4 to 1oz jig-head dropped along the rocks.

Cape May Bait & Tackle in Cape May had excellent numbers of kingfish and croakers on the beaches this past week and the hot baits have been bloodworms, squid, or clams.  There are also pretty good number of short flounder to keeper anglers busy in the surf.  The bay beaches and ocean-front have had some small striped bass show just after sunset through the night hours.  The 20 to 40 mile ranges have been solid for mahi and there has also been some cobia around.  The canyons, when anglers can get out, have been solid for tilefish, yellowfin, and mahi to 20+ pounds.  Crabbing continues to be excellent in the back bays and tidal creeks.

The best bet for the weekend will be to target ocean fluke if there is any window to be had, but it looks most of the weekend will be a blowout.  Saturday morning may be your best shot, but there will be a left-over heave to compete with.  Bay fishing throughout the weekend will probably be the best shot at finding some cooperative fluke, weakfish, and blowfish (near Barnegat bay).  Late-night fishing trips in September are perfect opportunities to work soft plastics around bridges, lighted docks, or tidal creeks.  Striped bass, weakfish, and even some bluefish will become more active as bait begins to move.  With the forecasted winds, working some of South Jersey bridges may not be a bad idea for this weekend.  Small shad bodies (4-5 inch), Fin-S, and Bass Assassin’s are perfect lures to cast up and down the shadow lines.