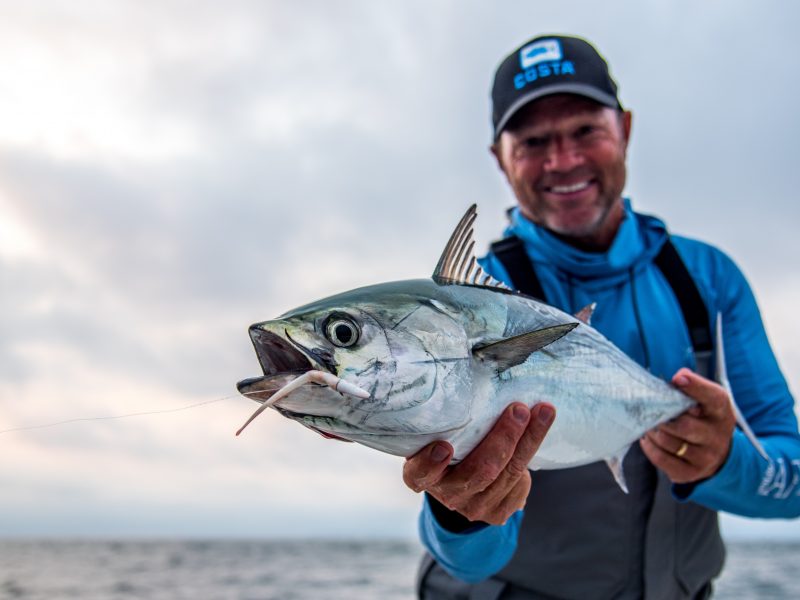 Above: Chris Megan with a false albacore from Wednesday morning.

Albies still seem to be the most popular target among the Cape’s fishermen as we pass the halfway mark of September. Striper fishing is picking up, but the water is still warm, and the best is yet to come for the fall bass fishing.

It’s tough to gauge where the albie season stands. I don’t think we’re on the back nine just yet, and I’m hoping that as the water temperature begins to fall, we’ll see the fishing improve again.

The albie action has cooled from the big push of fish in late August through the first days of September, and the fish have spread out. The Elizabeth Islands, which had been the hot spot last week have cooled, with albies being replaced by small bluefish at Quicks and Robinsons holes. According to Evan at Eastman’s Sport and Tackle, the better albie fishing has shifted back east, to the waters off Falmouth, but Buzzards Bay remains an albie dead zone.

Cole at Red Top Sporting Goods thinks the abundance of baitfish off the Cape’s south side is what has kept the albies from charging through Woods Hole and into the bay. Spearing and peanut bunker made up most of the albie menu so far this fall, but on Wednesday, Chris Megan and I found albies chowing down on 2- to 3-inch bay anchovies. These baits are nearly translucent, but have an amber tint, making brown, gold, orange, or amber lures good choices around them.

Chris had the hot hand on Wednesday, with his bites coming on a 4-inch RonZ. Soft plastics have been productive all this season, with many fishermen also reporting success with the Fish Snax Lures Albie Snax.

Toward Hyannis, the albie fishing has been slowing, according to the report from Sports Port. But stripers have been filling in, blitzing on peanut bunker along the south-facing beaches and in the bays. Evan at Eastman’s had also heard of blitzing stripers from one of his regular customers who thought he was approaching a school of feeding albies, only to find bass instead.

There’s been steady action on schoolie and slot-size striped bass in the Canal, reported Cole from Red Top, and he said fishermen using heavy jigs to get below the stripers have been finding some larger fish recently.

Cole also mentioned that bonito and Spanish mackerel have been hanging off the East End of the Canal.

It’s been a fair fall for Spanish mackerel. Fishermen have been catching them regularly while targeting albies. OTW’s Jack Burke beached one before Thursday’s morning thunderstorms soaked the Upper Cape. Spanish strike many of the same lures as albies, but slowing down the retrieve a click or two can help draw more strikes.

Spanish macks also have a softer mouths than albies, and playing them too aggressively will result in a pulled hook. They don’t fight nearly as hard as false albacore, but they are very good eating.

Bluefish have been around in good numbers in Buzzards and Cape Cod bays with some as large as 10 pounds being found around schools of adult bunker.  September, especially the days around the September full moon, often produce some of the largest bluefish of the season around the Cape, so keep an eye out for these yellow-eyed marauders laying waste to schools of bunker over the next week. I’ve also seen some reports on social media about good bluefishing from the surf on Nantucket.

Tuna fishing continues to be good. Trolling is producing good numbers of recreational-sized fish east of Chatham, says Evan. Spreader bars have been the most productive presentation. Captain Kurt Freund of Fishsticks Charters got a piece of that action this week, trolling up a 44- and a 47-inch tuna in short order on Tuesday. Captain Bobby Rice of Reel Deal Fishing Charters has been connecting on jigs and live bait as well.

The giant tuna fleet has been catching as well, with a number of fish in the 90- to 110-inch class taken over the past two weeks on live bait.

The canyons continue to produce, and Captain Larry Backman had another good trip this week, catching a good number of yellowfin, a swordfish, and a bigeye tuna.

Fishing around Martha’s Vineyard continues to be slow, according to the report from Larry’s Tackle.

It was great to hear about the uptick in striper action, but don’t let the lagging albie reports get you down.  Last year, the albies were around the Cape until Halloween, so we have plenty of innings left with that hard-fighting species. The most interesting report to me was that of the bonito in Cape Cod Bay. I’ve heard from a few sources now about schools of bonito bashing peanut bunker there, occasionally in surf-casting range. With the numbers of stripers and blues there as well, it could make for a fun mixed-bag light-tackle trip.