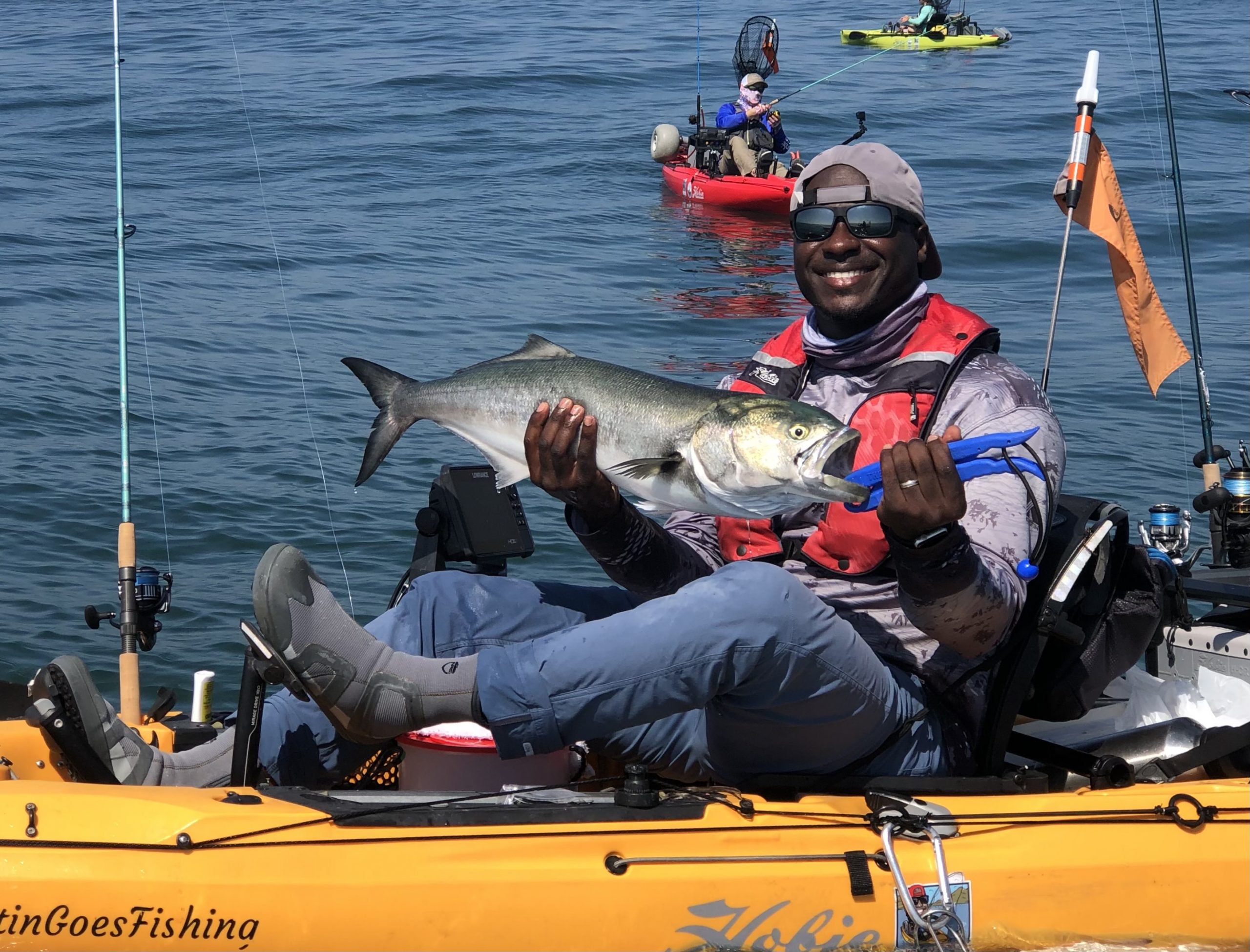 Captain Greg, of The Frances Fleet in Point Judith reported that they were back after it after a few days off for the storm. The weather didn’t seem to affect the fishing close to home. They had nice mixed bag of fluke, sea bass, and the most scup they’ve seen all year. The water is still a bit on the dirty side, but it is cleaning by the minute, so be sure to reserve a spot asap!

Captain Rick, at Priority Charters in Narragansett that he is back to a normal schedule after the storm. The inshore bass and bluefish bite remains as good as it’s been all year, while the sea bass continue to bite on inshore deep pieces of structure, and on the piles around Block Island. The cod fishing has also remained steady after the storm, with fish to 10-pounds coming over the rails today. The bluefin haven’t shown up yet post-storm, but word is that there were whales and bait all over the grounds today, so most are hoping it was just an off day.

Connor, at Tall Tailz Charters in Newport, told me that the fishing has been a little strange since the storm came through, but it’s showing signs of improvement. A nice push of cooler water has come in and appears to have woken up the bait even more. Silversides and peanut bunker are all over the surface, and you can generally sight cast to blitzing bass, bluefish, and mackerel. There has also been a healthy push of double-digit bonito and a few albies, so things should really blow open when the water cleans up a bit more. Those targeting tautog are saying that the storm hasn’t affected them at all, with plenty of limits for anglers dunking crabs on structure of varying depths.

Dave, at Ocean State Tackle in Providence, told me that the striped bass fishing has started to pick up in the Providence River, as the bait seems to be moving in there to get away from the more turbid water out front. The groundfishing has started to pick up as of Wednesday, with some decent fluke, sea bass, and tautog being reported. There is also no shortage of chub mackerel, as anglers await the arrival of more bonito and false albacore.

Nick, at Big Bear Hunting and Fishing told me that the bonito showed up and were not picky before the storm, but it has been a bit quieter since. Bonito, bass, and bluefish have been a bit tougher to find, but that should be changing soon with the water cleaning. Sea bass limits remain easy, and freshwater anglers are still catching some nice largemouth on shiners and topwater plugs during the evening hours.

Jay, at Pamela May Charters in Narragansett, also found a good bonito bite along the south coast before the storm. The bonito have been big this year and there’s plenty of bait to keep them around. There have been a few reports of albies hitting the same areas after the storm, and they should only get thicker with the amount of bait in the area. Striped bass and bluefish can be found blitzing on most days as well, and the striper bite on the island doesn’t seem to have skipped a beat. There are also thousands of sea bass to pass the time while you’re waiting for the albies and bonito to pop up.

Cheri, at C-Devil II Sportfishing told me that the fishing was surprisingly good right after the storm, with easy limits of slot bass and several trophy fish. The past few days have been a bit tougher, as they seem to have moved out with the sand eels, but they should be back soon. A few doormat fluke are still hanging around the East Grounds, and plenty of sea bass are rounding out the catch. Bonito are showing up in good numbers inshore, and the tuna bite persists southeast of the island. Yesterday’s trip saw a limit of yellowfin and some quality mahi.

Dustin, at Rhode Island Kayak Fishing Adventures also reports good striped bass and bluefish action post storm. Bottom fishing has been as consistent as ever for sea bass, tautog, and a few bonus triggerfish. As has been the case most of the season, the fluking has been tough, but you can battle for some keepers. The bonito have been trickling through in small pods, with more seemingly showing up each day. Kayak and shore bookings are filling up through October, and there are still a few dates available, so be sure to book ASAP!

Ian, at Ranger Charters in Newport has the boat back in the water and reported that the albies and bonito are starting to show back up in his neck of the woods. There are still some bigger tuna out at the gully, if you follow the signs of life out there. Bluefish and some striped bass can be found chasing bait balls all around Newport Harbor for those looking to bend a rod close to home.

Heather, from Blackhawk Sportfishing reported a strong week before the storm and increased activity over the past couple days. Besides the hurricane, the weather has been beautiful, and the fishing has been strong with limits of porgies and jumbo sea bass. The private charter trips have been successful as well, with plenty of big bluefish for everyone on board. Their trips continue to be by reservation only, and tickets post to their website on Monday evenings at 8 PM. Be sure to book a trip soon!

Andrew, at Fishin Factory 3 in Middletown, told me that the striped bass reports have improved for anglers fishing from the CT River all the way to the Race. Blitzes of smaller fish have been common all over the area, and the eel bite after dark has been consistently producing some better fish. The area from Niantic to Groton is seeing the most topwater action, due to an insane influx of rain bait. Bonito reports have improved quite along the south coast of Rhode Island. They seem to be moving around quite a bit, but if you spend some time anywhere from Watch Hill to Pt. Judith, you’re bound to find some. Porgy fishing remains great for bottom fishermen across Connecticut, and the blue crabbing had picked back up well before the storm.

Mike Roy of Reel Cast Charters told me that the pre-storm fishing was strong, and things haven’t really skipped a beat since. Peanut bunker and butterfish are all over the reefs and beaches with stripers and bluefish feeding on them during most tides. The storm seems to have blown in even more bait, and the bass seem to be even more aggressive. Captain Mike and his still have some openings for early to mid-September, so be sure to contact him soon for a fall run date!

Captain Chris Elser told me that the striped bass fishing survived the storm well. Peanut bunker schools remain prevalent in the Western Sound, and there are loads of small to medium-sized bluefish feeding on them along the surface. Big bass are still being caught consistently during the day on tube and worm rigs. No signs of bonito or macks to the west this week, hopefully, they arrive soon.

Max, at Fisherman’s World in Norwalk reports that striped bass fishermen are struggling a bit during the daytime hours, except for those trolling the tube and worm in deep water. The better bass action is coming after dark on fresh chunks, or the occasional topwater blitz around dawn. Small bass and bluefish can be found with regularity, with most of them blitzing on rain bait throughout the day. Those looking for bigger bluefish are finding them on the diamond jig in deeper water. Fluke fishing has been up and down, with a few better fish coming from the deep water around the OB buoy, 28C, and can 24. Porgy fishing is very good for shore and boat anglers dunking clams and squid, while offshore anglers are still finding tuna around the Gully and Tuna Ridge.

Henri packed a punch, but we seem to have lucked out from a fishing perspective. The storm didn’t dirty up the water nearly as much as it could have, and things seem to be getting right back to normal. Even more bait has been blown into the area, and striped bass, bluefish, bonito, and mackerel can be found blitzing across CT and RI. Larger bass can still be found around the island, and more are being found across inshore waters for anglers fishing the night and early morning tides. Black sea bass and scup continue to hold the fort for bottom fishermen, along with tautog, which are biting well for those starting to target them. Word from the offshore anglers is that yellowfin, bluefin, and Mahi are still biting well, so it appears they weren’t adversely affected by the storm. The weather seems to be settled for the rest of this week, and the fall run is starting to accelerate, so be sure to get out there!