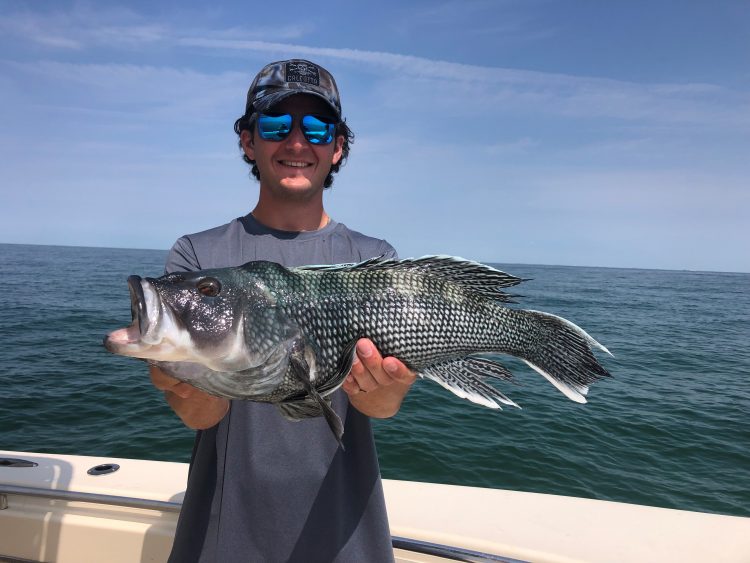 Pat at Eastman’s Sport & Tackle in Falmouth says striper fishing has slowed down, especially at the Canal. There are still schoolie bass in the south Cape ponds and they’re active around sunset. Boats at Monomoy have been getting into slot-sized fish. Even though there are reports of 30-inch bluefish at Horseshoe Shoal and smaller fish at Middle Ground, the bite has slowed down. Reports of bonito have been coming in from Middle Ground and West Falmouth Harbor. Pat says there have been generous reports of black sea bass at Squash Meadow, despite the all around slow reports. Regal Sword Wreck is holding giant bluefin and big porbeagle sharks. Brown sharking has been ‘really good’ all the way from Woods Hole to Sampsons Island.

“The offshore fishing has been great. I have had pretty good success on good-sized Mahi and small yellows in the lanes and the canyons continue to produce large tuna and billfish. Heading to Nantucket for the BGB and an overnight canyon trip, I’ll keep you posted.”

Capt. John Clothier of Fish Chatham Charters says the tuna fishing has been good this week. They’ve boated bluefin at Regal Sword between 85 and 103 inches over the past 4 days on live mackerel early in the morning or late in the afternoon.

Sam at Larry’s Tackle Shop on Martha’s Vineyard says he has been catching slot bass fish at night and there are some good 20 to 25-pound stripers around. Bluefish in the 10 to 12-pound range have stuck around and brown sharking is still hot and heavy with bait—bluefish, bunker, mackerel, and eels. Bonito are starting to fill in around the island and there have also been some reports coming from Vineyard Sound. Sam says there are bunker schools in Vineyard Sound and sharks have been shadowing them. Fluke fishing has been slow, but the commercial boats are easily limiting out on black sea bass.

Ian at Red Top Sporting Goods in Buzzards Bay says the Canal has been giving up 15 to 20-pound bass on jigs. He expects the bite to pick up over the next few days for the new moon and breaking tides.

Elena at Reel Deal Charters out of Truro says their charters have been focused on stripers and even in the horrible downpours most of the fish have been over-slots with some keepers mixed in.

Gary at Sports Port Bait & Tackle says fluke has been good at Nantucket Shoals and bluefishing is steady.

Capt. Mel True of Fishnet Charters told me his charters have been catching giant bass in the 40-pound range during the day on unweighted live eels. The black sea bass bite has been really good in 60 to 70 feet of water.

The most consistent fishing locally is the bluefin bite off Chatham. Striper reports have slowed down, especially in Vineyard Sound, but with the new moon on August 8, the fishing should pick up.

Brown sharking is the best option for shore-based anglers on the south Cape beaches.

More bonito should begin settling around the Hooter, the Elizabeth Islands, Vineyard Sound, and Buzzards Bay in the upcoming days. I was looking back at reports from previous years and the first albies make an appearance some years around August 14-18.

Keep an eye out for large bunker schools with sharks and gator blues shadowing them in Vineyard Sound.