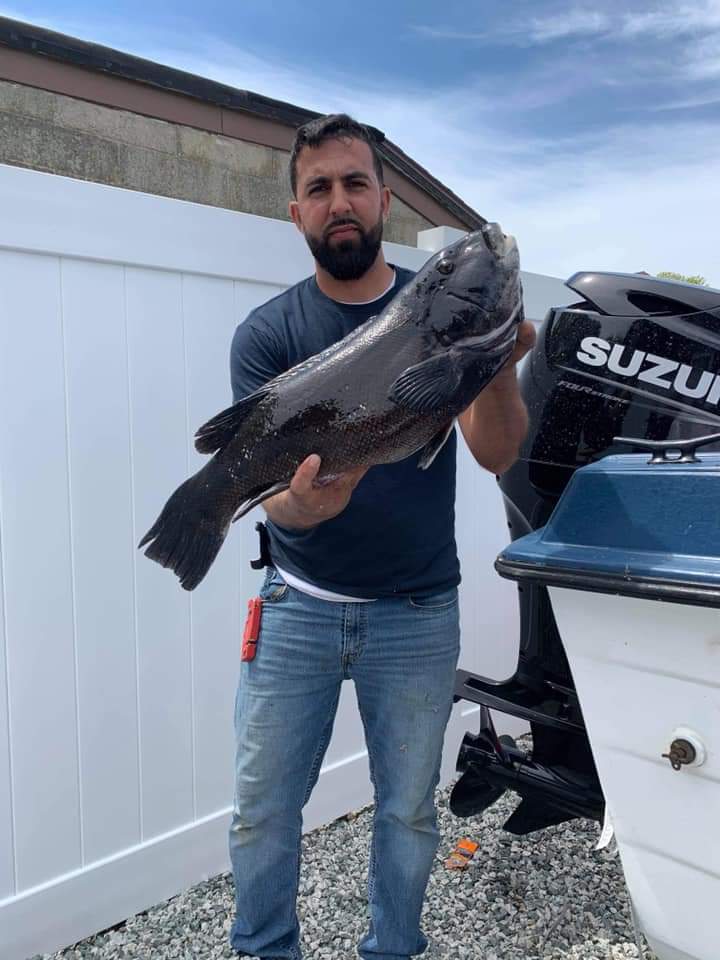 Last week I was on the phone with On The Water editor Kevin Blinkoff, and we were talking about the local reports, and he noted how the fishing on the Cape had suddenly flipped like a light switch. Since we spoke 7 days ago, the fishing has improved, again, with tautog reports over 10 pounds, keeper-sized stripers, and lots of squid.

Jeff, at Canal Bait and Tackle in Sagamore, says the water temps are high, and schoolie fishing is picking up, from Buzzards Bay to the west end of the Canal, and up to Scorton Creek. Mother’s Day or a couple of days after is when the first 20 to 25-pound stripers are caught in the Canal, Jeff says. He noted there are some good tides at the Canal next week. Keeper tog are at Cleveland’s Ledge in Buzzards Bay and the current limit is 3 fish until it switches to 1 on June 1,

Eastman’s Sport & Tackle in Falmouth, says there are more and more schoolies in the local ponds and estuaries. Cinder worm hatches have been taking place in the ponds and bays the past several nights; they’re roughly 1.75 to 2 inches in length. There are a fair amount of porgies in Buzzards Bay and squid fishing has been really good.

Julian, at Larry’s Tackle Shop in Edgartown, says there are plenty of schoolies on the south side of the Vineyard and they’re moving into the ponds. He has seen photos of fish up to keeper-sized (28 inches). Tautog have been biting well and one of Julian’s friends picked up a bunch of keeper tog Wednesday. A few big porgies have been caught in the harbor.

Larry at Macos Bait and Tackle in Buzzards Bay, says there are keeper bass in the Canal, particularly in the east end near Scusset Beach. There are lots of tautog and Larry says the boats are getting lots of big squid. Scup are starting to show and some nice big blue head black sea bass have been caught in Buzzards Bay, but unfortunately, they’re not in season until May 18.

AJ, at Red Top Sporting Goods in Buzzards Bay, says schoolie fishing in the Canal is in full swing, and he cited a photo of a bass around 28 inches. Tautog fishing is good and there was one report of an 11.5-pound tog measuring 24 inches.  Herring are in the Canal and so are bunker, which is unusual, because mackerel usually show before the pogies, according to AJ.

Sports Port Bait & Tackle in Hyannis, says there are schoolies in the Bass River and the Canal. Squid are still around and the boats are catching them, even though it has been windy and rainy. Tautog reports are becoming scarcer, but people are still coming into the shop for green crabs.

Capt. Mel True, at Fishnet Charters in Buzzards Bay, reports a hot squid bite this week off Hyannis. But, with the invasion of huge schools of scup, he expects them to get pushed out after this weekend. The tautog bite is Buzzards Bay is very good.

Want to get in on the bite? Find an OTW-approved Charter Fishing Captain for Cape Cod

The wind picked up last weekend, creating less than ideal fishing conditions. Even though the springs are windy on the Cape and Buzzards Bay, one of the overlooked aspects is the wide array of locations and fishing spots available to counter it. I’ll explain what I mean: tonight the wind is coming from the northwest, so I might try to find a jetty on the south side beaches, and fish the incoming tide, since the water moves west to east in Vineyard Sound. The wind will be at your back, preventing a bow from forming in your fishing line, and it will allow you to make long-distance casts.

Some prefer a stiff wind in their face, but others prefer it at their back. Figuring out your style based on wind direction is wise, but what’s more important is to figure out what the bass and blues prefer. When you’re going through your tackle box, think about your lure selection based on the wind direction, current direction, and which plugs will shine in the present conditions. Thinking about these variables will help you decide where to fish on the Cape.

A set of breaking tides will begin Sunday, May 9, and run until Thursday, May 13. Herring and bunker are in the Canal, so several variables have lined up, but we’ll see if the Cape receives a push of bigger migratory fish.

The forecast is improving, especially on Saturday, although there may be a passing shower. More importantly, I think water temps are going to hit the 52-degree mark today. Squid arrived on the Cape several days after the full moon in late April and the new moon next Tuesday, May 11, could bring more bait into our area. Pack your bag with soft plastics, bucktails, small topwater lures, and minnow plugs to get into some schoolies and slot fish. Watch or listen to Episode 5 of the Striper Season Update (Apr. 30) for more info about minnow plugs and remember to check the new Striper Migration Map every Friday.

Sign up for our 5-month long catch and release tournament, The Striper Cup.