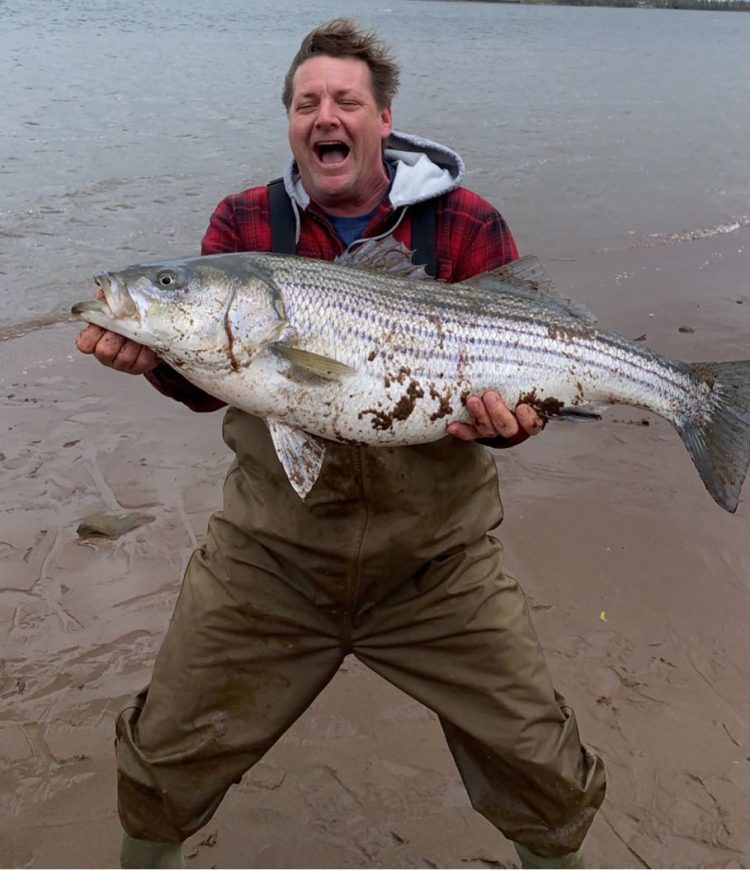 Cue the eerie music or maybe “Hallelujah!” – “They’re here!!”  It’s a welcome sight for many anglers working the coastal inlets as bluefish have arrived and by the social media posts they are biting on plugs and metals.  Some of the fish have been close to 10 pounds, so now is the time to hit the jetties.  I heard of bluefish arriving from Manasquan Inlet, Barnegat Inlet, Brigantine, and south almost around the same time in the last 24 hours.  Speaking of the jetties, anglers, have only 2 days left to get a few keeper blackfish as the season officially closes May 1.  Jigs or rigs tipped with clam and green crabs have been the good baits to use.  Striped bass in the 14- to 27-inch range are picking up clams, soft plastics, and small plugs in the backwaters.

Lacey Marine in Forked River received better reports of striped bass picking up bloodworms, clams, or sandworms along parts of the Toms River and some locations south.  The “Mathis” bridge or Route 37 bridge has been pretty good for schoolie striped bass during the evening hours.  The shop had some nice tog weigh-ins to 9 pounds with boat limits being caught from the inshore wrecks.

Creekside Outfitters in Waretown had some reports of action along Sunrise beach to Tices shoal, but the action has slowed with the best chances of catching are during the morning hours.  Crabbing is heating up in some of the back lagoons of Barnegat and Lacey with some nice 5.5 inchers in the mix.

Reel Reaction Sportfishing out of Waretown / Barnegat Light was out a few times this past week for bay combination charters with tog and striped bass being the main species.  The clients bent rods on short bass and with a keeper or two of tautog making it into the cooler.  The skipper didn’t see any bluefish yet, but that should change any day.

The Super Chic out of Barnegat Light will be starting the season for the opening of sea bass and the crew is looking forward to getting back on the water.

Tony’s Bait & Tackle in Manahawkin had good reports of striped bass from the local bridges during the early morning and night hours on small soft plastics.  Anglers looking for tog are finding better action at the local reef sites than the jetties.  There have been alot of short, fat females released along the south jetty.  The shop heard of bluefish action about 30 miles south of the store, so Barnegat Bay shouldn’t be too far behind.

One Stop Bait & Tackle in Atlantic City had a family emergency, but the shop will reopen on Friday.  Noel said the fishing along the AC jetties have been off the charts with lots of throwback tog in the mix.  Striped bass have been cooperative for anglers working jumbo bloodworms and some have been in the keeper range to 33 inches.  The shop did hear of a few bluefish being caught from the Brigantine area on plugs and a few anglers just picked some up behind Atlantic City, so it looks like they arrived.

Tackle Direct in Egg Harbor Township received a nice shipment of NorthEast swim-baits which have been working for schoolie striped bass in the back channels, sedges and tidal creeks.  Anglers using 1/2 to 3/4 jigheads are finding success during the outgoing tides and some of the bass have been up to 30 inches.  Bluefish have started to show up with the Brigantine area reporting on the movement of the yellow-eyed choppers.  Anglers looking to hit tautog for the end of the season should target the wrecks on or around the inshore reef sites.

Tight Lines Bait & Tackle in Somers Point reported decent tog fishing from the inshore reef sites and jetties off Ocean City.  White crab, greenies, and sand crabs have been working good on these fish.  Anglers working the jetties and inlets have started to see some bluefish moving in over the past 48 hours, so it should only get better.

Sterling Harbor in Wildwood reported some tog action along the bridges on green crab for anglers working the waters in the yak.  Schoolie striped bass up to 25 inches have been picking up small swimshads or 4-inch soft plastics.  Anglers have reported a few bite-offs, which means there are bluefish around.

Cape May Bait & Tackle in Cape May reported another good week of tog fishing for the boats hitting the wrecks off Wildwood and Cape May.  The only issue has been the winds and unfortunately the season closes May 1st.  Drum have started to arrive with a few boats reporting fair bites along parts of the Delaware Bay.  Schoolie bass are hitting 14 to 25 inches on soft plastics and bloodworms.

The best bet for this weekend will be to look for bluefish and striped bass around most of our back bay areas, bridges, and sedge islands.  Small swim shads, plugs, and bait (clam/worms) have been ideal for catching schoolie bass.  There have been some keepers, and it seems that a few more are being reported each day.  While looking for bass, anglers can now begin to throw some metals in the mix or retrieve the lures faster as there have been bluefish reported.  Another area to try is the Delaware bay as Drum have arrived with the April “pink moon” and the bite should ramp up approaching the May full moons.  It’s beginning to feel like fishing season, so gear up and get out there.  Good Luck, Be Safe, and Tight Lines!