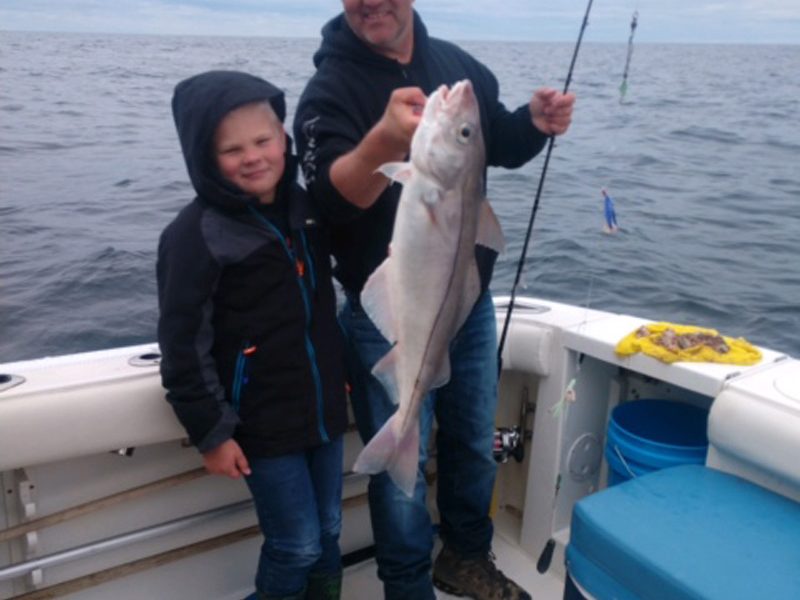 Many have been anticipating this Saturday for months as open season begins for New Hampshire’s Designated Trout Ponds. Downeast salmon continues to intrigue many in Maine with trolling streamers among the preferred method. Groundfishing is the only game in the salt at the moment with hefty haddock reports fairly common.

The big news according to Joe from Granite State Rod and Reel Repair is that designated trout water bodies open for business this Saturday! Joes preferred picks are Pleasant Pond, Dublin Lake, French Pond, Lucas Pond and Mount Williams Pond. Should you not mind crossing the border into the Bay State, one of the shop’s regulars caught two 20” rainbows from Walden Pond in Concord on chartreuse power bait.

Andy from Adventure and Catch Charters showed me a cooler of redfish that had more orange than an orange tree grove! He’s been finding haddock in the same spots which on average are far bigger than last season. This year many of the fish are between 19” and 24” and there is less of the short shock factor when fish after fish tape at just under size and must be tossed back. While the bite has been best among offshore ledges, especially Platts, Captain Andy has had luck among irregular bottom not far from the Isle of Shoals.

• Want to get in on the bite? Find an OTW-approved Charter Fishing Captain for New Hampshire

Peter from Saco Bay Tackle Company told me that he’s hearing of good groundfishing from the folks at Bunny Clark outfitters in Ogunquit. Ultra Marathon trips have resulted in haddock, pollock, redfish, wolffish and hake up to 36 pounds! Platts is holding plentiful redfish and better than average haddock. Jeffrey’s Ledge also is seeing an uptick in bigger-than-average haddock, cusk and plenty of redfish. A very large “herring” was observed in the clutches of an osprey in the Saco River the other day. Could it be the first scout shad of he season? Upstream of the Skelton Dam is a good smallie stretch with reports that those fish are waking up. Salmon trolling remains the big freshwater draw with gaudy streamers such as fire smelt patterns working well in Sebago Lake as well Downeastern gems such as West Grand Lake and East Grand Lake.

With no trout fishing allowed for months, for obvious reasons many of New Hampshire’s Designated Trout Ponds will be bustling with activity this Saturday. A few choices to consider are Pleasant Pond, French Pond and Dublin Lake. The salty pick is Platt’s Ledge haddock, which this year are on average much bigger than the past few years! Downeast salmon lakes such as West Grand Lake are as pleasing on the eyes as they can be at the end of the line with salmon the top ticket and streamers the best offering.