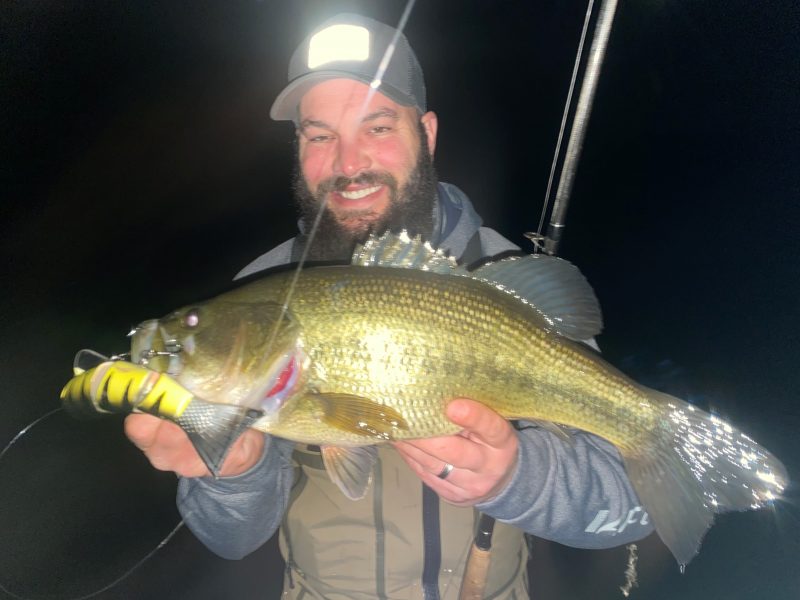 My coworkers are still putting in time on the upper Cape freshwater ponds for the time being. Anthony DeiCicchi continues to pick off largemouth on wakebaits and swimbaits. Tuesday night he went fishing with a friend, George Costa, who caught a 13-inch, 3-pound bass on a 3-piece rat wakebait.

Jeff, at Canal Bait and Tackle, says everything is in place for the spring run of stripers at Buzzards Bay and the Canal. Schoolie bass could show up on any tide in the next week, Jeff says. For the Canal, Jeff recommends Savage Sand Eel weighing 3 to 5 ounces in herring color. If you plan on fishing the Cape estuaries, small paddle tails are a wise choice for late April. He says it’s a good idea to stock up on tackle now because it’s going to be difficult to find gear come May. There were reports of tautog in the west end of the Canal.

Peter, at Larrys Tackle Shop in Edgartown, says schoolies are still being caught on the south side of the Vineyard on pearl bucktails and swim shads. Holdover fishing reports have been quieter the past two weeks. There are ‘huge’ schools of bunker off Vineyard Haven Harbor, causing several customers to ask for snag hooks at the shop. Gannets have been diving on schools of bait and small silversides are in the back bays. With lots of bait around the island and water temps nearing 50, it won’t be long until the bite takes off.

Macos Bait and Tackle in Buzzards Bay, says there are some schoolies in the Wareham River, but no reports of fresh fish. Large schools of bunker have been reported at the Vineyard. Tautog reports have been quiet, but there are fish in Westport, meaning they’re on the way.

Amy at Sports Port Bait and Tackle in Hyannis, says freshwater fishing continues to be really good. Shiners and crankbaits have been producing well for largemouth. Amy says the shop is selling green crabs, but she has yet to hear tog reports.

Unfortunately, the migration hasn’t reached Buzzards Bay and the south Cape beaches, according to the people I spoke with today. But the general consensus is fresh fish will be here any day. Water temps in Woods Hole are hovering around 48 degrees, showing it’s a bit early for fresh schoolies. 52 degrees is widely considered the ‘magic’ number.

Broodstock trout have been dropped into some of the local ponds, creating fun opportunities to catch large rainbow, brookies, and browns. The night largemouth bite on the Cape is producing some good fish on swimbaits and wakebait, making it worth the time and effort.

The extended forecast for Buzzards Bay is calling for highs over 60 from here on out beginning Monday.