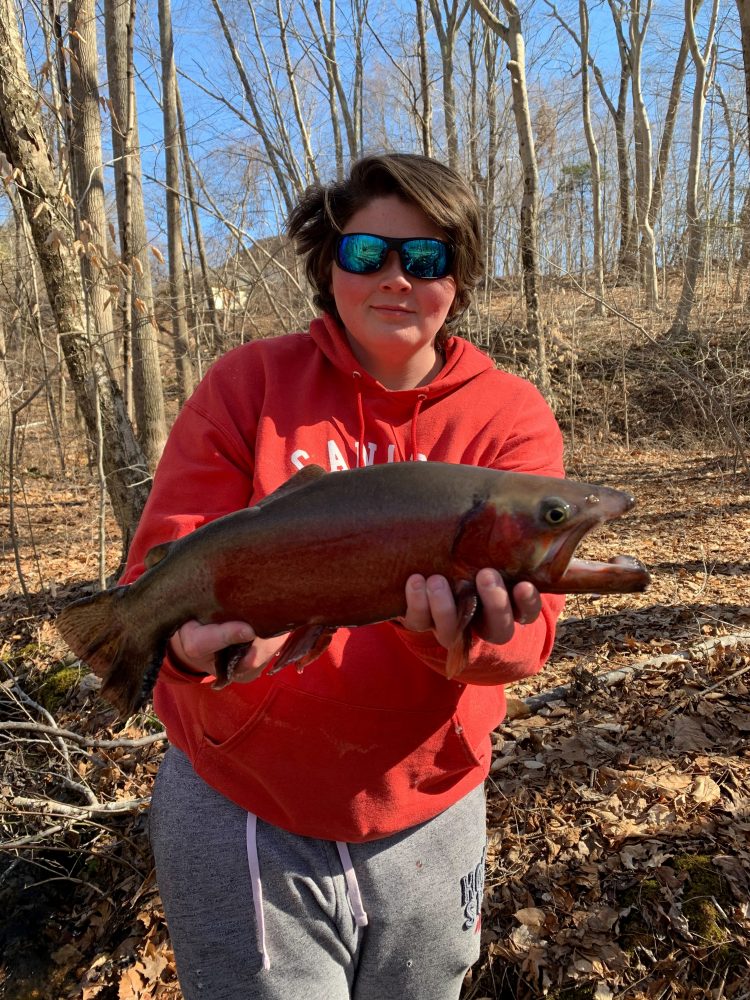 Trout action has been strong in Connecticut while perch, calico, and bass are biting throughout the region. Holdover bass action is hitting its stride, while we await the arrival of some fresh fish.

Rivers End in Old Saybrook, says many anglers are still focusing on the recently stocked trout streams and cashing in well on spoons, Rapalas, PowerBait, worms, and small shiners. Holdover bass anglers are starting to pick up sandworms, so the local bass bite must be starting to get going. The holdover bite has started to pick up at the Housatonic with the early run of herring showing up, and things should only improve as we warm up. The tautog season opens next week as well, and with the trend we’re on, the water temps may cooperate before the spring season closes.


Heather from Blackhawk Sport Fishing, says they just finished their annual maintenance and they plan on being back in the water by early April. They will start in early next month with squid and scup trips, and keep building from there. As always, keep checking their Facebook page or website for updates, as the booking season is right around the corner.

Evan at Black Hall Outfitters, reports the warm weather has brought about some continued strong spring fishing. The local rivers continue to get stocked, and the trout bite has been very good for those that are trying. The Yantic, Mill, and Salmon Rivers have been some of the strongest areas to focus your attention, but most of the smaller streams are starting to fish better. The lakes and ponds are also steadily waking up as the remaining skim ice melts. Largemouth bass have been very receptive to slowly worked jigs, while calico and perch have been taking hair jigs. The Connecticut River is starting to put up some good numbers of perch, and the pike are starting to put the post-spawn feed on as well. Holdover striper anglers are finding some nice fish in the Housatonic, especially since the herring started to trickle in, and things should only improve in all the tidal rivers as we warm up.

Captain Frank, of The Frances Fleet in Point Judith, reports that they were finally able to get out after a rough start to March, in terms of the sea conditions. The water temperatures are still on the cold side and fishing was tough, but they did mark a solid amount of bait. The extended forecast looks solid and the water is warming up quickly, so the late winter/early spring fishery should fire right up any time now.

Dave, at Ocean State Tackle in Providence, told me that local anglers are starting to get spring fever with the recent warmer temperatures. White perch and some nice calicos are biting at Roger Williams Park in Providence. There is also a good bite for both species reported at Turner Reservoir in East Providence. The holdover bass population seems to have woken up with the recent weather, with anglers reporting good catches in the Pawtucket and Seekonk Rivers, especially around daybreak. Tautog season officially opens on Apr. 1, but we are probably still a few weeks away from the water temps getting to a point where the bite is worth the effort. The state announced trout season will open early on Apr. 7. The Dept. of Environmental Management stocked some of the lakes, ponds, rivers, and streams with golden rainbow trout and Sebago salmon. The shop is currently undergoing some renovations, but Dave will be up and running for the opening of the season on Apr. 7.

Nick, at Big Bear Hunting and Fishing in Chepachet, says largemouth fishing continues to get better as the temps gradually climb day by day. Ned Rigs and jigs worked low and slow have been working well, Nick says.

Spring is here and the fish are certainly starting to wake up. Freshwater action remains the main game in town, with strong trout stockings in CT and excellent bass and panfish in both CT and RI. Pike action is starting to heat up across both states as well and will only improve as the water warms and the fish turn the post-spawn feed bag on. Holdover bass action also continues to improve as the first push of herring is trickling in and we should be adding some fresh bass to the mix in the coming weeks. Tautog season is opening up in the coming week, and we aren’t too far away from the water temperatures being ideal for another strong spring bite.