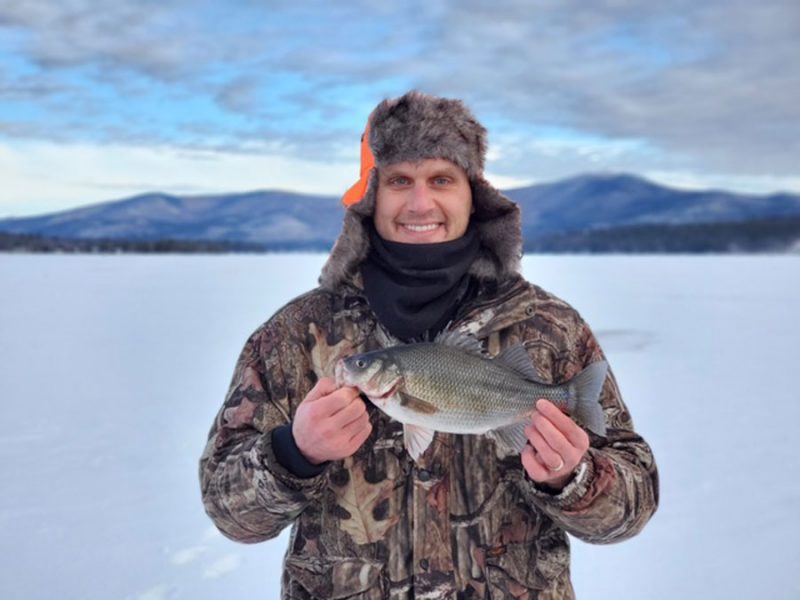 Pictured above: Angler Adam with a nice white perch caught while fishing with TimMooreOutdoors!

News regarding the iconic Winnipesaukee is really good, while the just-as-iconic Sebago – not so much! Thankfully all legendary fisheries in Maine are not in a wait-and-see mode at the moment as most of the smelt camps are open for business!

Tim from TimMooreOutdoors told me that Lake Winnipesaukee was officially declared “ice in” on Tuesday! That does not mean that one can just recklessly head out there by any means available but it is a step in the right direction. Moore good news from Tim is of the extraordinary white perch bite and some of these fish 2 pound-plus tanks! Tim is treating his patrons to a combination of traps and jigs depending on the mood of the fish. When dialed into smelt, the perch can be very selective, making a trap/smelt combination the best bet! Tim feels that when the Broads caps over, which is the case now, the bait and the fish move away from the oxygenated open water and into the bays. The result is that the bite is on at Melvin Bay, Suissevale and Winter Harbor.

Jim from AJs Bait in Meredith echoed what Tim said and also mentioned Leavitt Park and Alton Bay. Conditions are getting favorable to where authorities are considering opening up the perennial “on-ice” airport in Alton Bay.

Joe from Granite State Rod and Reel Repair passed along a few local warm water winners such as Tewksbury Pond, Diamond Pond and Highland Lake. Regarding Winnipesaukee, he said that some are jigging up lakers with jigs that resemble yellow perch fry, which is contrary to the smelt-or-skunk mantra many espouse there.

Want to get in on the bite? Find an OTW-approved Charter Fishing Captain for New Hampshire

While I had heard whispers of some creeping out on sheltered coves on Sebago, I wouldn’t book a week at a motel near there just yet! For the real deal, I consulted the always reliable Jordan’s Store which is but a skipping stone from Sebago and was informed that a better choice right now would be a boat rather than a Bob House! Two words from the gentleman I spoke to summed it up – white caps! Fortunately Brady (not that one!) from Dag’s Bait & Sportgoods in Auburn had better news! Leading the reports was a 22-pound pike caught from the Androscoggin River! Thompson Lake has been good for lakers by Marina Point. He also mentioned cusk and a host of salmonoids from Long Lake. For a warm water species variety pack, consider Cobbosseecontee Lake where smallmouth bass, brown trout, and pike are all part of the equation.

For a peak into things at the smelt camps, Zach from Saco Bay Tackle Company told me that just about every camp he knows of has towed their shacks out onto the estuaries. Like all angling, the success rate depends on who you talk to with some boasting and others bemoaning.

Want to get in on the bite? Find an OTW-approved Charter Fishing Captain for Maine!

Winter white perch from Winnipesaukee has to be one of the better New England ice fishing bets and the game is on right now! Nasty northerns up to 22 pounds are on the feed in the pike-rich Androscoggin River! If you’d prefer tasty over nasty than have at the smelt at the camps in Southern Maine!