Joe, at Diorio Guide Service, says ice fishing has been good over the past week. I asked how thick the ice is, and he says the central part of the state has 9 inches, give or take. Crappie fishing has been consistent with Rapala Jigging Raps and teardrop jigs. Joe and Jimmy recently hit the ice with a friend, Christian, and between the three of them, they reeled in an estimated 60 stripers. Trout action at the Farmington River has been slower than usual, possibly because of the runoff. However, the fish have been on the bigger side. Joe’s hopeful the bite will pick up again, as temperatures for the next few days will hover around 32 degrees during the day, and below freezing at night. He also mentioned several of the catch and release streams were recently stocked with trout. If you’re interested in learning to centerpin fish for trout, Joe has open availability this weekend.


Max, at Fisherman’s World in Norwalk, says it has been pretty quiet the past week. Most of the reports have been coming from Bantam Lake and Squantz Pond. Pike into the mid-30-inch range came through the ice, with several over 40-inches. Max says some nice stripers were caught on the Housatonic River after the recent stretch of rain and warmer weather.

Andrew, at Fishin’ Factory 3 in Middletown, says there’s roughly 6 to 8 inches of ice locally. Panfishing has been good at the coves connected to the Connecticut River, some tiger trout were caught, and pickerel are providing action at lakes in the central part of the state.

Evan, at Black Hall Outfitters in Old Lyme, says ice fishing is the main attraction at the moment. He recommended using shiners and Swedish Pimples for pike, bass, perch, and crappie. “Keep your leaders light, 4 and 6-pound fluorocarbon keep those finicky fish biting,” he says. Slush and ice have been an obstacle for trout fishermen at local rivers, but when there is open water, egg imitations, nymphs, and spinners are the best bet. The Housatonic River is giving up some holdover stripers on soft plastics and 5-inch swimbaits, with the biggest fishing coming at night. Although the Westbrook store remains closed until further notice, BHO is shipping online orders, or they can be picked up.

Dave at Ocean State Tackle in Providence, says the nearby ponds have 5 to 7 inches of ice, and the northwest corner has 8 to 10 inches. Crappie and pickerel have been the most common catches through the ice. Dave says he has medium and medium-heavy shiners, a variety of sled sizes, 3 power augers, and a good inventory of 6 and 8-inch hand augers. 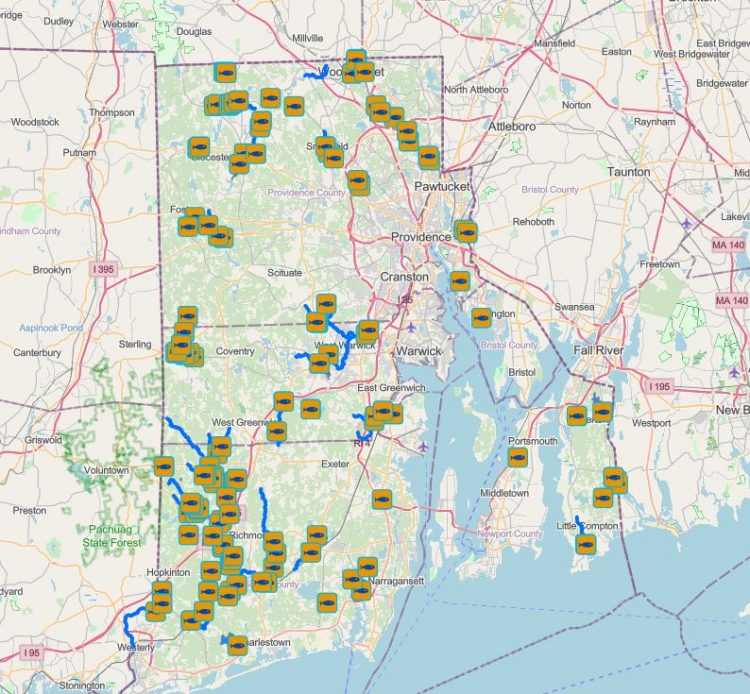 The post-snowstorm forecast is calling for temperatures around 32 degrees, with overnight lows below freezing. With that being said, ice fishing should hold steady in the central and northern parts of the state. The upcoming days could be the last opportunity to get on the ice before it thaws, creating sketchy conditions. Medium shiners are always a wise choice for tip-ups. Hair jigs, Rapala Jigging Raps, Swedish Pimples, spoons, blade baits, and Binsky lures are all good options for jigging through the ice. The Farmington River continues to produce some larger trout and is certainly a viable option. Holdover striper action on the Housy should pick up when the temperatures crawl into the 40s.