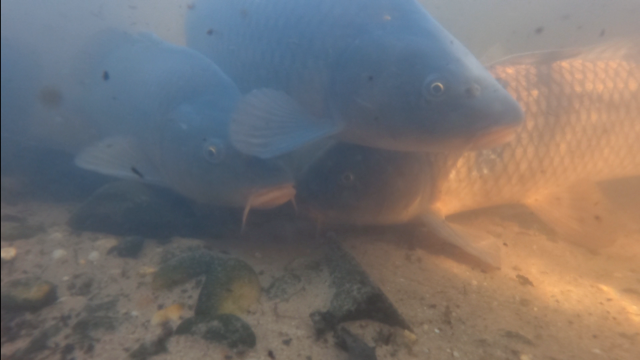 It has been cold at night and temperatures have been dropping low enough to leave a thin sheet of ice across most bodies of water by morning. Running water is the primary option available to Long Island anglers.

I had a real tough time finding some with hungry fish these past two weeks. I started off on a high note just after New Years Day, before the waters froze. Holdover stripers were hungry, as were freshwater species like largemouth bass and crappie. It is winter fishing, so it is not easy or fast, but it is time well spent outdoors.

The fly/jig under a bobber has been my best method lately. I cast it out and bring it in very slowly. That means I let it sit for about 15 seconds after it lands. Then I pop it hard, so my bobber sends ripples in all directions. I view that as “ringing the dinner bell.” Fish staging nearby will sense the water rippling above them and swim towards the source. When they see the bobber, they realize it is not food, but “WAIT! There is a tiny morsel hanging right underneath that non-food item; might as well make this trip worth it. Gulp.” That is what they say. If you do not get the bite, repeat the pop-and-wait until you are ready for your next cast.

I even tried at night, with a glow in the dark cork bobber I made. It was real hard to see the glowing material on the water, but it worked just well enough to bring a couple of crappie to hand.

I have found carp grouped up in a few different spots that have remained thawed because of running water. They are a tough target when it is this cold, but they will be my primary target for at least the next couple of days. Some warm sun on their backs could get them chewing.

Different waters froze at different rates. In fact, there are some freshwater bodies that are still completely devoid of ice. They are few and far between. I have been doing more adventuring to new spots than actual fishing. I am always looking for new waters that receive little-to-no pressure. It is a fun way to get cardio and see some stuff most people never do. In fact, the amount of bald eagles I have seen in the past two weeks is just ridiculous. I feel like I am living in the Pacific Northwest.

That brings me to what I think is the most important aspect of the past couple of weeks. I cannot help but connect the ever-increasing population of large raptors to the rebounding stocks of Menhaden (bunker). I do not know if that is a direct cause-effect relationship, but all this extra bunker around is doing wonders for our wildlife. A lot of bunker hung out here for just a bit too long this year. There was a die-off beginning in late December, after the first freeze. Cold-shocked fish swam lazily in circles until they died. They were washing up dead in every single estuary I visited along the south shore and peconics. I heard the same was happening to the west of me. All sorts of waterfowl could be seen feeding upon the carcasses. Seagulls would frantically rip them to shreds before a larger seagull would show up to steal it. Lots of meat falls off the fish’s body and sinks to the floor. The chunks are picked up by nearby fish. The tiny specks of detritus are consumed by shrimp, crabs, shellfish, eels, and baitfish. Creatures down to the size of plankton will all benefit from this bounty.

A lot of the brackish fish I have caught lately have been very fat. At first I thought it was a herring bite occurring, but I am pretty sure the dead/dying bunker were such easy and nutritious meals, that the fish did not need to put forth much effort to eat extremely well. Why not capitalize upon that?

Now that I have written this down, I do not feel so bad about catching so much less during the past week. I do not know if I am correct, but the following rationale makes sense to me: the fish were full and the water was cold, so the bite was off. Bada bing bada boom.

We are going to have multiple days in the mid-40s this week, with warm rains falling on cold waters. I think the fishing is going to turn back on, and it is going to be hot! I would bet money the fish will be putting on the feed heavily again to fatten up before the next cold spell.

That is my take on my pursuit!

Other guys have been killing it lately, like Anthony Savino. He took a kayak out the other day and achieved the winter slam. He tossed a 1/32 ounce marabou jig in brackish water, and that was exactly what the doctor ordered. He got 2 carp, 10 yellow perch, 12 white perch, and a couple dozen striped bass to 25 inches. All the fish hit the same black jig, and came to hand using four-pound line and ultralight tackle. That is a day for the books! 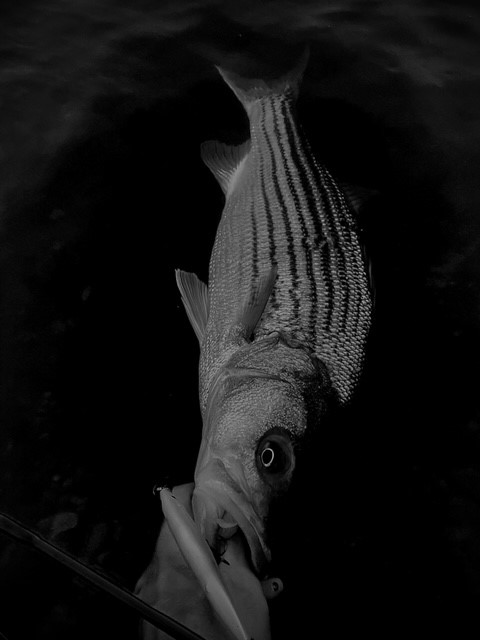 My good friend Nico found Herring heaven the other day near some rocks in the bays. A huge variety of waterfowl were hunting alongside the seals on an outgoing new moon current, giving away the herring schools’ positions.

My friend, Jerry, of “Fish Your Way”, is catching plenty of those fish on herring on a Sabiki rig, and his recent video is a great instructional on how to rig up for and target these tasty fish. He is finding some nice sized ones on the western half of the island.

Last but not least is the offshore anglers. The name of the game for Montauk’s Viking Fivestar this week was cod, and they were all over them with the anglers from the James Joseph. Pollock and ling are also on the menu, and the fishing is good out east. Mike from Moriches landed a 13.2-pound cod to take the pool this Tuesday. Their next trip is this Saturday, Jan. 16.

Out west, the Capt. Lou Fleet in Freeport is having a tougher time on the cod grounds. They are running these trips at 6 am on Wednesdays, Fridays, Saturdays, and Sundays. They are also doing seal watching trips, which tend to be quite productive in the winter. The photographs they get from those trips are awesome. Their next seal trip is this coming Sunday, Jan. 17, from 1 to 3 pm.

Captree’s Laura Lee is sailing as often as possible, targeting a variety of offshore species. This past Sunday, they encountered 15 big red hake, 120 cunner, six porgies, six blackfish, 14 sea bass, 47 dogfish, 21 ocean pout, and one fluke. The prior Friday, they hooked a good number of all those same species, plus 42 pinfish to boot. Cod and pollock are always potential catches as well. A 25-pounder came over the rails a bit earlier last week.

Do not sleep on this warm spell we are about to have! Get out there and enjoy it. Tight lines.