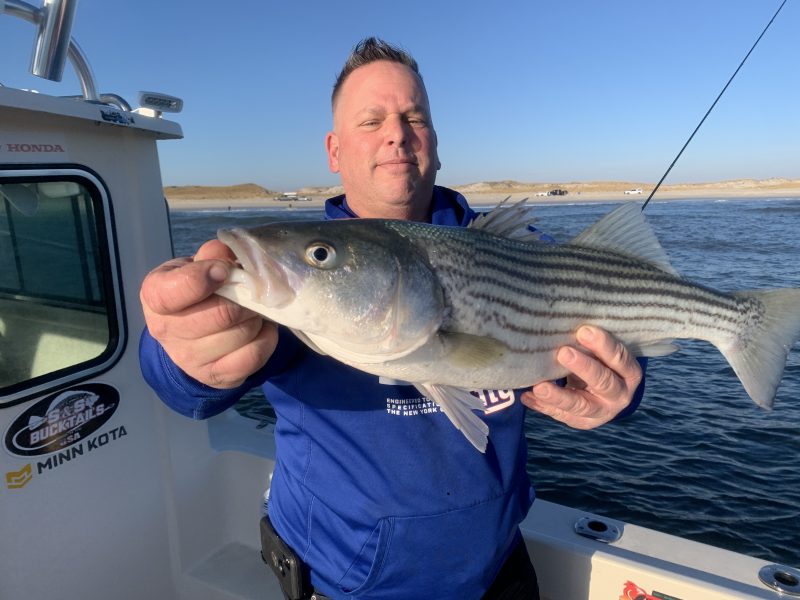 The week was the proverbial “calm before the storm” as our mid-week Nor’easter did some serious beach erosion and churning up due to the high winds and rain. A few boats in my area didn’t make it through as failed bilges left them in a precarious situation. Our striped bass season is still hanging on by a thread, but we have to see if the latest storm gave it the one-two knockout punch. Tautog fishing has been hampered by sea conditions as bottom clarity has been brutal, making for very slow days on the water.  Hopefully, we get some calmer conditions through the Christmas holidays as anglers might have the last shots for 2020.

Creekside Outfitters in Waretown, says it was a good week for anglers targeting striped bass along the beaches and closer to the inlet. Boats trolling the local waters haven’t found much success as the bulk of the fish have slid past our area. Tautog fishing has been good, and the shop has a full stock of green crabs.

Bobbie’s Boats Bait & Tackle in Barnegat Light is getting ready to close shop for the season, but the owner said he may be open for gas over the upcoming weekend depending on the weather.

Reel Reaction Sportfishing in Waretown, says the recent tautog and striped bass trips have been productive. The anglers on the tautog charters kept over a dozen fish and released a 10.5-pound male. Striper fishing was good early as the crew caught over 35 fish. The skipper will be running a few more trips before pulling the boat for the winter.

Super Chic Charters in Barnegat Light, says they caught stripers while jigging over the past weekend. The midweek winds and storm kept the boat tied to the dock.

Absecon Bay Sportsman in Absecon, says it has been a decent week in the surf for anglers targeting schoolie bass from 10th through 17th streets near Barnegat Light. The surf fishing has been pretty consistent prior to the storm for anglers using small metals and plugs. Tog have been hot and cold at the wrecks — some days are productive and others are slow.

Offshore Bait & Tackle in Atlantic City, says the tautog fishing over the weekend was hit or miss with some wrecks producing good action, while others were slow. Anglers looking to take home tautog for the table should definitely hit the wrecks with white legger crabs.  Schoolie stripers are still being landed on soft plastics, but they are moving further up the river.

Fin-Atics in Ocean City, says there were some reports of striped bass near the 3-mile line over the weekend, but the mid-week storm put a damper on those efforts. Tog fishing has been good, but it may take a few days for the bottom to settle because of the Nor’easter.  Striped bass are still hitting soft plastics and plugs in the backwaters, but anglers should definitely slow down their retrieve.

Badfish Charters in Ocean City, says the found striped bass feeding on sand eels tight to the beach. The skipper says his clients were throwing small metals and sand eel soft plastics just outside the breakers.

Sea Isle Bait & Tackle in Sea Isle City, says it was a slower week due to the mid-week wind and rain. Anglers working the artificial reef sites were able to find some keeper tog to 8-pounds. The shop has some last-minute Christmas deals, so stop in and check them out.

Avalon Hodge Podge in Avalon, says they will be closed for the remainder of the season. They wanted to thank all of the customers for their patronage over the past season. The shop will re-open in early spring.

Peace Token Fishing Tackle in Cape May Court House, says it was a slower week of reports due to the inclement weather and poor sea conditions. Tog have been landed from the Cape May and Wildwood sites over the weekend and the shop heard of some good tautog fishing from the Sea Isle area.

Jim’s Bait & Tackle in Cape May, says good tautog fishing from the Wildwood and Cape May reef sites; white crabs were the most productive bait. Stripers are being caught just inside the 3-mile line. The bay water is in the upper 40’s, so the inlets on the incoming are the best place to target bass.

Greenhorn Outdoors in Bridgeton, says there were reports of white perch from the rivers and some of the beaches up to Fortescue. Most of the action has been on pieces of bloodworms. Schoolie bass continue to provide light tackle action, but the bite has slowed down.

The best bet for the weekend will be to hit the striped bass or tautog grounds. For some anglers, this might be your last opportunity before the busy holidays. After this week’s blow, it’s anybody’s guess as to where the striped bass are located. Prior to the storm, the bass were feeding on sand eels and I would definitely recommend targeting the same locations. Tog fishing may not get good again until next week as the bottom will take a few days to settle and get them back on the feed. Most importantly, support your local tackle shops during the holidays. The majority of the shops I spoke to are running some nice deals and sales.