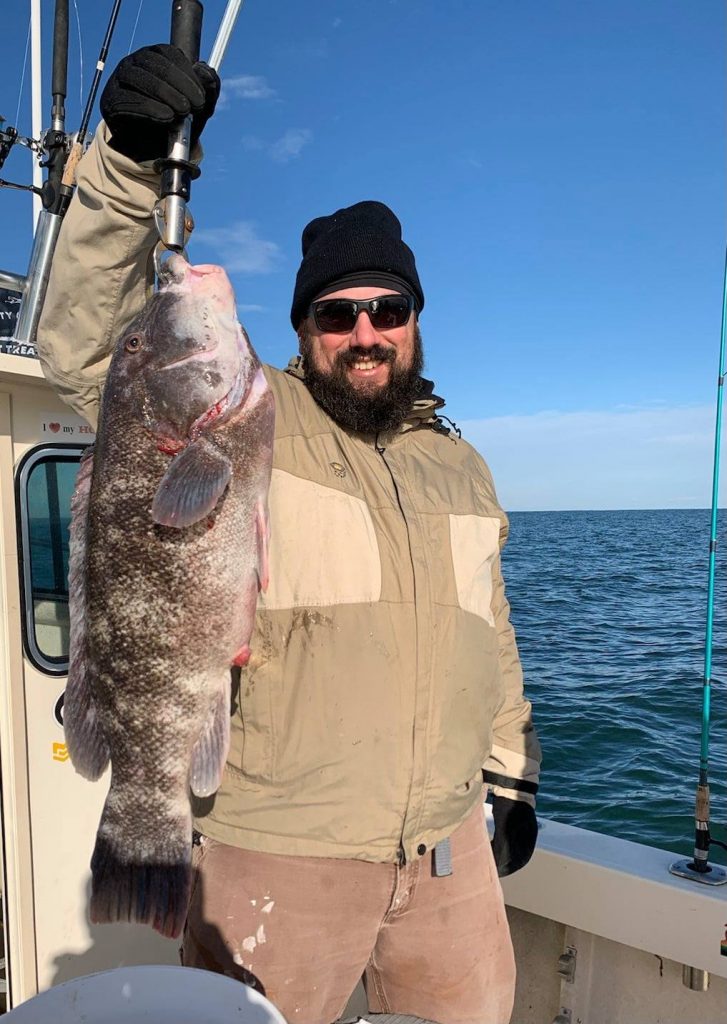 A 14.5-pound tautog caught by Aaron Edelman while fishing with Capt. Brett Taylor of Reel Reaction Sportfishing. The fish was bleeding from the hookset, but was released to grow larger.


We are winding down as the temperatures have started to dip and more boats are being stored for the season. But some anglers are still fishing the beaches, jetties, and decks in search of their last 2020 fish. The northeast had a rough weekend with some cooler temperatures and high winds, which made fishing very tough. It seems we have been hampered by winds and narrow fishing windows over the past several weeks. This upcoming weekend looks doable and the following week looks cold, but promising. Tog fishing has been good or extremely slow depending on the given day. There were some nice jumbos caught this past week, and it’s great to see some anglers returning them to live another day.

Creekside Outfitters in Waretown, says it was a tougher weekend with the weather not cooperating, but anglers able to make it out during the week have found cooperative striped bass from Island Beach State Park south to Little Egg. Tautog fishing has been spotty during the week, but some anglers reported good fishing on the larger ones.

Bobbie’s Boats Bait & Tackle in Barnegat Light is still open for fuel, but the shop is out of spot. There are still a few stripers around the inlet. Tog fishing off the jetties has chilled off dramatically with the colder bay temperatures.

Reel Reaction Sportfishing in Waretown, says trips for most of the weekend were canceled due to the weather. The skipper was able to get one charter in with clients boxing 4 tagged stripers while releasing 35 others. The charter switched over to tautog, but was limited to pieces of structure inside of 3 miles. The charter ended up keeping two fish to 17-inches and released a 14.5-pounder.

Super Chic Charters in Barnegat Light, says the boat was out during the week searching for striped bass and found some schoolie action along the beach. Most of the fish have been in the slot fish category along with some throwback dogfish.

Fisherman’s Headquarters in Long Beach Island, says stripers are holding tight to the beaches from the middle of Long Beach Island up to the North end. Anglers reported handfuls of bass on slender jigs and there have been lots of sand eels in the area.  Tautog fishing has been hit or miss with some of the headboats only catching half their limit for 6 hours.

Absecon Bay Sportsman in Absecon, says there is good action on smaller fish in the back of Atlantic City and further up the rivers. With the bay temperatures starting to drop, the incoming has been the best for these fish. It seems bass and white perch are starting to move up the warmer rivers to some of the wintering spots.

Offshore Bait & Tackle in Atlantic City, says it was another week of striped bass being caught off the beaches, but most of the trolling action has progressed southward. There are still plenty of schoolie stripers in the backwaters and they have been falling for small soft plastics. Tog fishing has been hit or miss as the bite has been troubled by the sea conditions.

Fin-Atics in Ocean City, says there are some sporadic reports of small striped bass off the beaches and in the backwaters. Most of the action has been on soft plastics and metals for the bass. Tautog fishing has been good at some of the reefs from Ocean City south to Cape May. White crabs have been the ticket as compared to green crabs.

Badfish Charters in Ocean City, says they worked a few trips during the week to catch striped bass along the bay and some of the cuts off the inter-coastal. Most of the bass have been landed on small soft plastics and plugs.

Sea Isle Bait & Tackle in Sea Isle City, says there are good reports of tog from one of the local headboats. The fish are being caught on the wrecks and white-legger crabs have been the ticket. Striped bass fishing has been good out front for trollers and anglers fishing the back have been finding shorts.

Avalon Hodge Podge in Avalon, says there are stripers in the backwaters being caught on soft plastics and tog fishing at the local reefs has been fair. Anglers working crabs for tautog are having to wait out the bites.  Some of the days have been very tough fishing with only a few biting.

Peace Token Fishing Tackle in Cape May Court House, says there is better tog action from the Cape May and Wildwood reefs. There were some nice fish landed in the 10-pound range; all the action has been on white crabs. Striped bass fishing has been hit or miss out front, but the schoolie bite in the bay remains pretty consistent.

Jim’s Bait & Tackle in Cape May, says tog fishing is good at the local reef sites, but anglers have to stay with the bite. There have been days when it’s very slow with moments of activity.

Greenhorn Outdoors in Bridgeton, says white perch are picking up worms and hooks baited with shrimp in the creeks. There hasn’t been much going on out front. The shop is open, and has been very busy this past week with hunting sales.

The best bet for the weekend will be to hit the beaches, jetties, and ocean during first light as there has been good striped bass activity during these times.  Most of the action has been on fish 24-to-28 inches caught on small soft plastics or metals.  Tog fishing should get better as some of the dogfish move off the wrecks; they’ve been overrun with them. Sea bass fishing is pretty solid right now, but most anglers will have to jump on the headboats as the action has been in the 50-to-70 mile range.