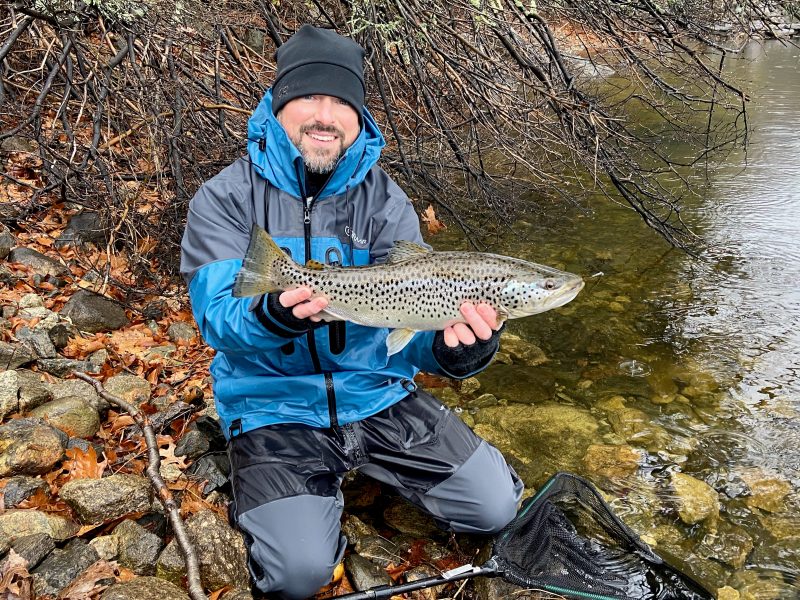 Andrew, at Fishin Factory III in Middletown, told me that school striped bass can still be found around the mouth of the river, but most of the local linesider anglers are heading to the Housatonic or the Thames for some solid holdover bass action. Reports of school bass are plentiful once again after a small delay due to the rainstorm last week. Most boats have stayed tied to the docks this week, but those that have gotten out are still finding some nice sea bass and cod at Coxes and around the Block. Freshwater anglers continue to report good trout fishing in the Salmon River Farmington TMAs. The Connecticut River was fishing very well for pike and panfish prior to the storm and should continue to do so as it cleans up in the coming weeks. With the exception of some smaller places in higher elevations, all the safe ice was killed after the rainstorm, so ice anglers are once again in a waiting period hoping for another freeze.

Ted, at Three Belles Outfitters in Niantic, told me the holdover striped bass action remains steady in the Housatonic, Thames, and parts of the Connecticut River. This is especially the case in the evenings following warm days. Freshwater action has remained steady whenever you can find a piece of water that isn’t skimmed over with ice. Largemouth, perch, and pickerel are still biting well on small offerings that are fished slowly. The Connecticut River was blown out after the Christmas rainstorm, but it is starting to drop quickly and should start fishing well as it cleans in the coming week.

Heather from Blackhawk Sportfishing reports that they were only able to get out once over the past week due to the weather. The sea bass and scup action has started to slow a bit, but the cod fishing has started to improve. The boat has now been moved to Noank Shipyard for the winter, which puts them even closer to the best winter sea bass and cod grounds. The schedule is often dictated by the wind this time of year, but they will continue to sail daily every chance that they get. Trips will be posted on their website, so be sure to check in for a reservation and schedule updates.

Fisherman’s World in Norwalk reports that the Housatonic has dropped back to a fishable level and is starting to put up some quality holdover bass fishing once again. Small soft plastics on jigheads remain the top producer for school bass, and there are still some better fish in the mix that will take some larger offerings. The reservoir has been fishing well, but unfortunately, that is now closed for the year. Freshwater anglers can look to some other strong trout options such as the Farmington, upper Housatonic, Saugatuck, Norwalk, and Mill Rivers.

Captain Frank, of The Frances Fleet in Point Judith, reports that they were finally able to get back on the water on Wednesday and the results were much better than the weekend. The water has cleaned up a bit and they were able to put together a nice mix of cod, scup, black sea bass and a few weakfish. They will continue to fish on a daily basis if the weather allows; all reservations can be booked online. They are also offering gift cards for the holiday season, which can be purchased on their website and sent via e-mail.

Dave, at Ocean State Tackle in Providence, told me that most local anglers have set their sights on freshwater fishing and are reporting strong trout action following the recent stockings. Olney Pond, Carbuncle Pond, and Lincoln Woods are a few of the many trout-stocked ponds that are said to be fishing well. Holdover striped bass action has also ramped up, and they aren’t all small. A few anglers reported finding a nice pick of keeper fish, along with school bass in the rivers. Cesin Curi managed a half dozen keeper class fish on white soft plastics this week. There are still some squid around as well, with reports coming from Newport and Jamestown.

The strong late fall/early winter fishing should roll right into the New Year. In the salt, the cod numbers seem to be increasing. Hopefully, this coming week is a bit more settled wind-wise and provides a couple of chances to get on the water. Freshwater anglers are finding some strong holdover striped bass action, as the rivers start to settle after last week’s rain. The trout action seems to have benefitted from some higher flows as well, with great catches coming from across New England.