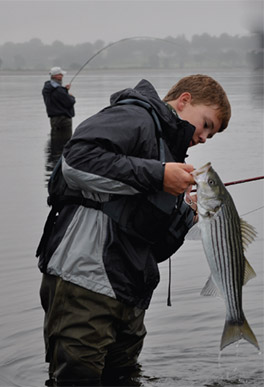 This weekend has potential to be a reprieve from the cold/windy weather and should provide a shot at one last bottom fishing trip in salt; while freshwater anglers will have an abundance of pre-ice fishing options!

Andrew, at Fishin Factory III in Middletown, told me that school striped bass can still be found around the mouth of the river, and the holdover bass bite has started to intensify in the other tidal rivers across the state. Most boats have stayed tied to the docks this week, but those that have gotten out are still finding some nice sea bass and cod at Coxes and around the Block. Freshwater anglers continue to report good trout fishing in the fall-stocked areas, including but lot limited to: Day Pond, Black Pond, Salmon River TMAs and Farmington TMAs. The Connecticut River has settled down and started to clean up, so it’s no surprise that the pike anglers are starting to come bye the shop to pike up shiners on a daily basis. The panfish bite is also gaining steam, with anglers finding big calicos, yellow perch and some white perch down south.

Ted, at Three Belles Outfitters in Niantic, told me the local saltwater bite has come to a halt, but anglers are starting to cash in on some early holdover bass action in the Thames and lower CT Rivers. The CT tautog season has come to an end, but anglers fishing in Rhode Island are still resulting very strong results. Freshwater action has been up and down, with the best action coming on the warmer days. Warm, sunny days are producing some nice largemouth and panfish, while trout action has been strong in most of the stocked ponds and rivers in the area. The most productive freshwater lures right now seem to be jigging style offerings like ned rigs or hair jigs fished painfully slowly, as the water temps have really started to drop.

Like most boats in the area, Heather from Black Hawk Sportfishing told me they weren’t able to get out on the water too much last week. The few trips they were able to make saw some lights out sea bass action, with easy limits of fish to 5-pounds. There are also still plenty of scup to go around, along with a nice mix of cod. They will continue to post new trips on Monday evenings, so be sure to check the Facebook page or website for updates and reports.

Captain Chris, at Elser Guide Service, told me that things have slowed down a bit out front, but he has been marking boatloads of fish heading up the river to winter-over. Reports from anglers around the Housatonic have been strong, and Chris is looking forward to putting some time in before it gets too cold.

The Frances Fleet in Point Judith has continued to lose most days to the weather, but luckily the wind forecast at least looks reasonably settled for the upcoming weekend. The water is still warm enough to provide a few more weeks of strong tautog action, and those trips will continue to sail daily when the weather allows. The cod action should also be picking up when they make it out to the grounds. Better numbers of cod should be hitting the grounds and the scup should be thinning out. The cod trips will also continue to sail daily at 6 AM as well. As has been the case all season, reservations are required, so be sure to check the website to reserve a spot!

Dave, at Ocean State Tackle in Providence, told me that tautog reports have still been pretty good for the anglers that are still willing to venture out, with solid reports from the deeper rockpiles around South County. Cod reports have been quiet due to the weather, but that bite should be going strong when the weather settles. Rhode Island has stocked trout for the fall/early winter season and anglers are cashing in with some strong catches across the state. Dave is now open by appointment only so give him a call at 401-749-3474 if you’re looking for a gift certificate, Christmas gifts or just some gear for yourself!

Captain Kelly, of C-Devil II Sportfishing, told me that the weather really capped the number of trips they were able to make this week, but the tautog bite has been stellar when they got after it. They are still finding limits and the quality of the fish remains consistently strong. The cod grounds also remain fruitful and haven’t been getting hit too hard. A steady pick of cod, scup and huge sea bass remains the norm whenever they can get out there. Be sure to take a look at their live booking schedule if you’re hoping to squeeze one more trip in!

The weather has made things a bit trickier in the saltwater over the past week, but the weekend is looking considerably warmer and calmer. It’s looking like a strong weekend to get out there and fill the coolers one last time. Tautog action has been strong in Rhode Island; while cod, sea bass and scup are still rounding out the catch in the normal early winter haunts. Holdover striped bass are sensing the cold and starting to make their way up our tidal rivers and estuaries. They will undoubtedly provide plenty of action for anglers with the winter blues. Freshwater anglers should look forward to some strong pike, trout and panfish action, as those fish start to chew hard before the ice settles in.