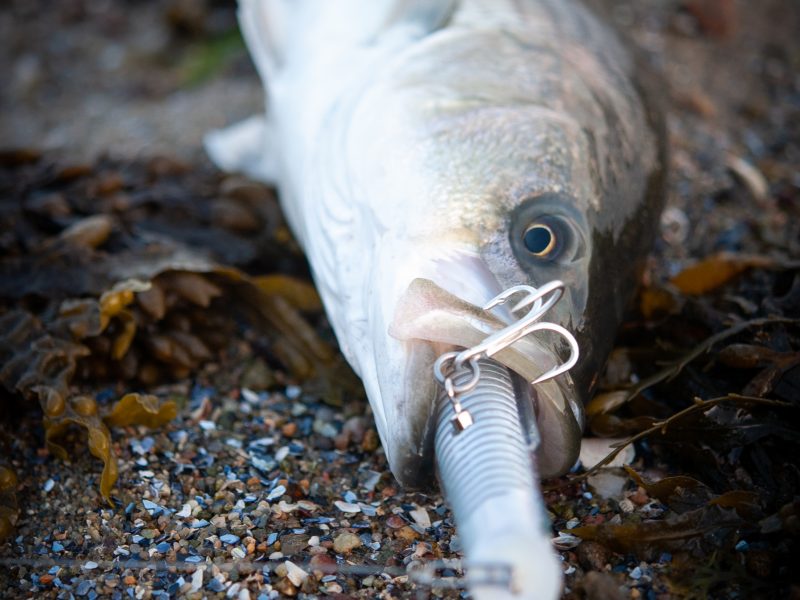 The winds came this week which coincided with the opening of our 5-fish tautog limits.  Some headboats and larger charters did make it out and reported some “off and on” fishing. The key with tog is to stay with the fish as the water temperatures begin to drop and they gradually move to deeper water. Striped bass fishing remains good, particularly around the inlets and back bays for anglers drifting live spot or eels. Anglers fishing the beaches are having a much more challenging time finding cooperative fish. Trollers are picking up fish from Seaside south through Ocean City around the 3-mile line.

Creekside Outfitters in Waretown, says there are some keeper striped bass around the seaside pipe area on the 9’er trolling gear. Anglers working live spot in the inlet were finding short fish along both sides of the rocks.  Tog fishing has been very good, but took a dip with the stirred up sea conditions over the past week.

Bobbie’s Boats Bait & Tackle in Barnegat Light, says the tautog reports from the inlet rocks have slowed down as the water temperatures dipped downward. There are still stripers in the bay, but most are 20-to-25 inches. Anglers working the jetty rocks for stripers are finding better success during the night tides.

Reel Reaction Sportfishing in Waretown, says the weekend was busy, with doubles on Saturday. However, the trips on Sunday were cancelled due to the weather. Saturday ended with bonus permit striped bass to 27.5-inches and tautog limits to 6-pounds.

Super Chic Charters in Barnegat Light, says clients on the boat worked jigs along the beaches and pitched some live baits along the inlet to produce a few keeper bass and bonus fish. The Captain has some open tautog trips planned in the coming weeks.

Fisherman’s Headquarters in Long Beach Island, says it was a slower week off the beaches with some skates and dogfish caught from the sand. Anglers working plugs during the early morning and late evening hours are finding some striper success. Tog fishing has kicked off and the shop is loaded with Magictail jigs for the rest of the season.

Absecon Bay Sportsman in Absecon, says the morning trips have been producing bass to 31-inches in the back waters. Live spot or eels are producing along the deeper holes with consistency.  Anglers looking to pick up bass on the troll should work the 2-to-3 mile lines with umbrella rigs.

Fin-Atics in Ocean City, says stripers are back on the feed. The beginning part of the week was a bit tougher with the winds and stirred up bay water. Anglers working out front are beginning to find better schools of striped bass to 40-inches.

Badfish Charters in Ocean City, says the early part of the week was tough, but the striper bite picked up in a few areas later in the week. Ocean trips are starting to produce better results on striped bass in the mid-30 inch range.

Sea Isle Bait & Tackle in Sea Isle City, says there were better reports of stripers to 28-inches in the bay over the weekend. Most action has been on live spot with anglers catching 5-to-10 bass per trip. The outgoing tide has been doing better than the incoming, but that may change as the bay temperatures dip lower. Tog anglers had some tough wind to deal with during the early part of the week, but the weekend looks better.

Avalon Hodge Podge in Avalon, says there were some decent sized tautog landed on the inshore wrecks, but only a few bigger boats were able to make it out. Anglers working green crabs on traditional rigs were producing. The striped bass bite is still solid in the back bays, with fish between 20-to-30 inches landed on live eels or spot. Anglers have to work several drifts to produce fish, so stay with it.

Peace Token Fishing Tackle in Cape May Court House, says anglers are working the back bays using light tackle and live spot to catch stripers. Some of the cuts along Cape May up to Wildwood are producing bass during certain stages of the tide. The wrecks are holding tautog in 40-to-50 feet of water.  The only issue is finding less windy days.

Jim’s Bait & Tackle in Cape May, says the tautog action started slow, but picked up later in the week. It seems the water is beginning to clean up from the blow and tog have begun to put the feedbag on. Striped bass fishing out front has been tough, but boats are finding stripers by trolling north of Wildwood. Bay fishing remains good for mostly short fish and the occasional 28-incher.

Greenhorn Outdoors in Bridgeton, says anglers are still finding schoolie striped bass in the creeks and some of the deeper holes in Delaware Bay. White perch are still picking up bloodworms or grass shrimp.

Offshore Bait & Tackle in Atlantic City, says there is decent action along the Atlantic City jetties for the start of the 5-fish tautog season. Anglers working green crabs were able to land 2-to-4 keepers during their stays. There are a lot of smaller fish around, and anglers need to put in some time for when the bigger ones chew. Striped bass action has been slow off the beaches, but there have been better reports for the boats working the inlets and backwaters with live baits.

The best bet for the weekend is to hit the inshore tautog wrecks before they get depleted.  Once the cooler is full with tog, switch over to striped bass inside the 3-mile line. Anglers looking to jig should use small Ava-style metals, or lures resembling sand eels. Trolling umbrella rigs with shads or tubes seems to work better than bunker spoons or Mojos. Beach anglers will have their best bet during the early morning hours before sun up, and should walk the beaches pitching dark-colored plugs to cuts and holes. If we could get some consistent light winds, it would be the icing on the cake.