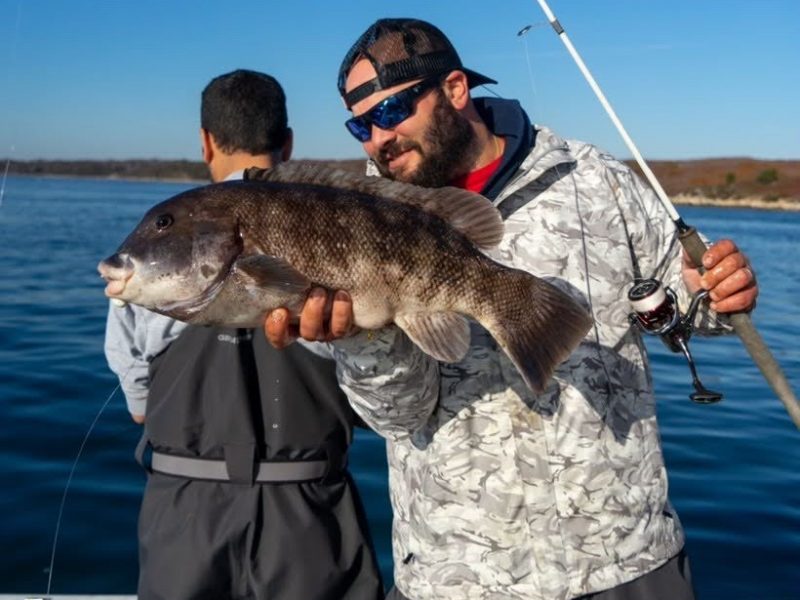 Above: Anthony DeiCicchi with a solid tog from Sunday.

T-shirts and tog don’t usually go together this time of year, but that was the combination Chris Megan and I found along the Elizabeth Islands on Sunday. The tog fishing was excellent, and we caught a limit, and then caught and released many more keeper-sized fish during a half-day trip.

Tog are the top dog on the saltwater side right now, reported Evan at Eastman’s Sport and Tackle. Many of the tog are being reported in 25 to 30 feet of water. As the water cools, the fish will move deeper, and fishermen can follow them out by targeting deeper structures as the season wears on. By the way things are looking now, we have a few more good weeks of tog fishing ahead of us Evan predicted. He’s got green crabs and tog jigs in stock for anyone willing to give it a try.

Stripers are still kicking around. Most are schoolie-sized, but the presence of larger bait in the Canal this week, presumably sea herring, is a good sign that there may be some slot-size and larger bass still hanging around the Cape. Schoolies are still hitting in the South Side bays and harbors, the Canal, and along the Cape Cod Bay beaches. Small soft-plastic jigs are a great bait this time of year, and paddletails or minnow plugs are a good bet for imitating sea herring.

More tuna were caught in the past week, and judging by reports, many were recreational-sized fish. Captain Bobby Rice had several fun-size tuna with his family over the weekend.

East of Chatham, groundfishing is another good opportunity right now, for fishermen looking to load up on fillets before it’s time to wrap the saltwater season.

“We took advantage of the perfect weather on Sunday to head east. We were prepared for the possibility that there might be tuna around, but our primary target was cod. We caught 8 keeper cod and a few smaller ones and one small pollock. One of the cod came on the teaser above a jig, but most of the fish were caught on bait. The highlight of the day was the reason we only went home with 7 keeper cod, instead of 8. I had just gotten a glimpse of color when a shadow rose up under the fish. The shadow turned into a huge mako that bit the cod off neatly just behind the head. I was so dumbfounded, I just stood there frozen, staring at the cod’s head. So the shark came back around and ate that too.”

In freshwater, fishermen found some impressive brown and rainbow trout over the past week, with some of the best action coming after dark. Largemouth bass are biting well, hitting a wide variety of lures from jerkbaits to jigs to big swimbaits.

Live shiners are a lock for largemouths, and improve your odds of fooling a big holdover brown trout. For rainbows, a nightcrawler is a good bet after some fall rains, but they’ll hit spoons, jigs, and stickbaits as well.

It’s still worth looking for stripers, but scaling down the tackle might be necessary. You may find more striper activity inside bays and rivers now, as some stripers move in there seeking warmer water and baitfish. Some of them may even holdover through the winter.

Tog are the best bet for fast saltwater fishing. Depths around 30 feet were fishing well last weekend, so it’d be wise to start there and move deeper as needed.

Trout fishing is great, and so is largemouth fishing, so you can’t go wrong with a switch to freshwater right now, either. Take advantage of the mild weather and warm temperatures, and do some fishing!