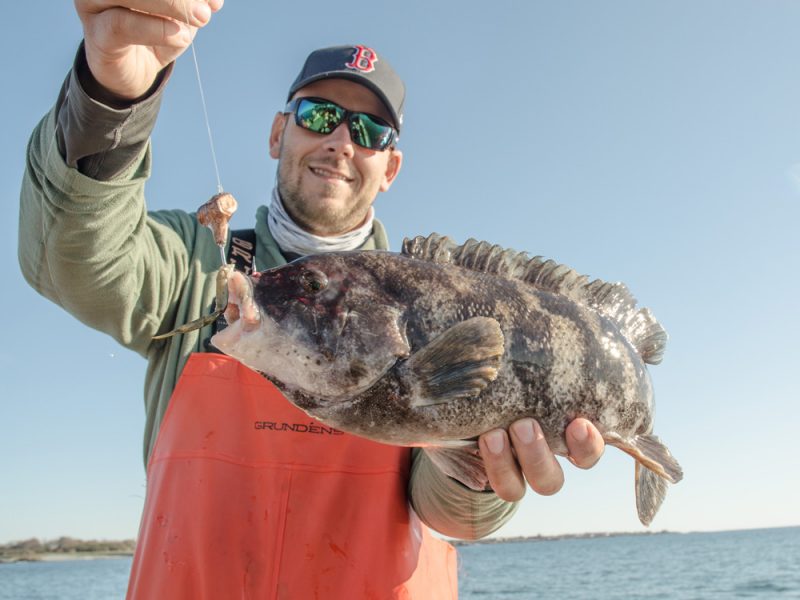 Wind has been the word of the month so far, with more days plagued by high winds than not. We have a reprieve Wednesday into Thursday, but the fan is cranking back up Thursday into Friday.

When fishermen got out this week, they found, blues, bluefin, bonito, bass, blackfish, and albies.

Captain John at Fish Chatham Charters had three bites on Thursday, landing two giant-class tuna and losing a third. He said the tuna  fishing is going strong from Peaked Hill down to Nauset, and with the amount of bait and fish he’s seeing, says it could last for another month.

John also mentioned the very good striper fishing in the Monomoy Rips and off Nauset. Those bass were feeding on a seemingly endless school of adult bunker that had parked it off the Outer Cape earlier this month, but appears to have been moved along by the recent winds.

Bunker popped up in other places in recent days, most notably, the Elizabeth Islands and Edgartown Harbor on the Vineyard. My friend Jonah Olsen found a school of bunker being harassed by bluefish over deep water in Vineyard Sound on Wednesday, and then found another school of bunker, closer to the Elizabeth Islands, that was being hammered by bass.

Evan at Eastman’s Sport and Tackle had heard of stripers to 38 inches being caught around the bunker schools this week.

Not all of the bunker have been attracting fish, however. A school sitting in Edgartown Harbor has been largely unbothered by bass a blues, though Joel at Larry’s Tackle said a seal has been living well thanks to the school of big baitfish. Joel expects some fish to find those bunker eventually, however.

Elsewhere on the island, blues are being caught, though most are that mid-size 5- to 7-pound class. Larger blues have been tougher to find on the Vineyard. There were some big blues in the Canal over the weekend, with some as large as 15 pounds being reported from the East End. I went to get in on that action myself on Monday, but was late to the party. I saw one bluefish caught on a diamond jig, but my poppers went untouched.

Schoolies continue to dominate the catch in the Canal, said AJ at Red Top, though he’s expecting another wave of fish to move through. He does think a large number of bass went around the Cape, however, a theory supported by Captain John Clothier’s report above.

The Vineyard is awash in stripers from schoolies to slot-size, said Joel at Larry’s, and the South Side of the Cape is seeing good numbers of similar-size fish. Evan at Eastman’s recommended eels, and given the number of menhaden around, chunks of fresh-cut bunker might be a good choice as well -and could even weed out a cow from the schoolies.

Albies are still kicking around the Cape. Joel reported fewer but larger albies on the Vineyard, and Evan heard of good blitzes over the weekend off Falmouth. There were albie reports all the way out to Hyannis from this week. From Captain Peter Fallon of Gillies and Fallon Guide Service:

Seems like after every big blow we’ve had the albies go on a tear. Sometimes it takes a day for them to get reorganized, but then it’s game on. Not sure that will be the case this time around, but I plan to be out looking for bonus-round opportunities.

Friday was really good all over, and Sunday and Monday featured churning feeds from some selective fish at Waquoit. Wednesday and Thursday haven’t had more of the same when and where I’ve looked, just pods of pretty fast moving fish from Succonesset to Great Pond, not offering good fly shots.

I caught what will probably be my last albie of the season on Monday, thanks to an assist from my friend Pat O’Donnell who was fishing on shore, and pointed out the fish breaking behind my kayak. The albie was the fattest one of the year for me. Most albies caught on the back half of October seem to have that bulked-up appearance. It was a great fight, and a good fish to end on, but I wouldn’t turn down the chance to catch one more.

Tog fishing is great, and limits are common for angler’s fishing Buzzards Bay and along the Elizabeths. AJ at Red Top said there have been plenty of 5 to 6 pounders taken, and recommended fishing as shallow as 15 feet of water.

It’s the New Moon on Friday, and perhaps the last good shot at finding some big bass. While there was no reports of outsize stripers this week, this time of year, the big bass usually move through with little fanfare, in small groups of large fish. Fish at night, with eels, and perhaps you’ll catch your biggest striper of the year. Alternatively, you could take topwater plugs and enjoy some of the wild schoolie-on-peanut-bunker blitzes that have been popping up off the South Side and Buzzards Bay shorelines. Tog fishing is at it’s peak, so don’t wait to drop green crabs over some rocky structure. If you don’t have a boat, you can always give it a try from shore, either off a jetty at the entrance to a harbor, or in the Canal.