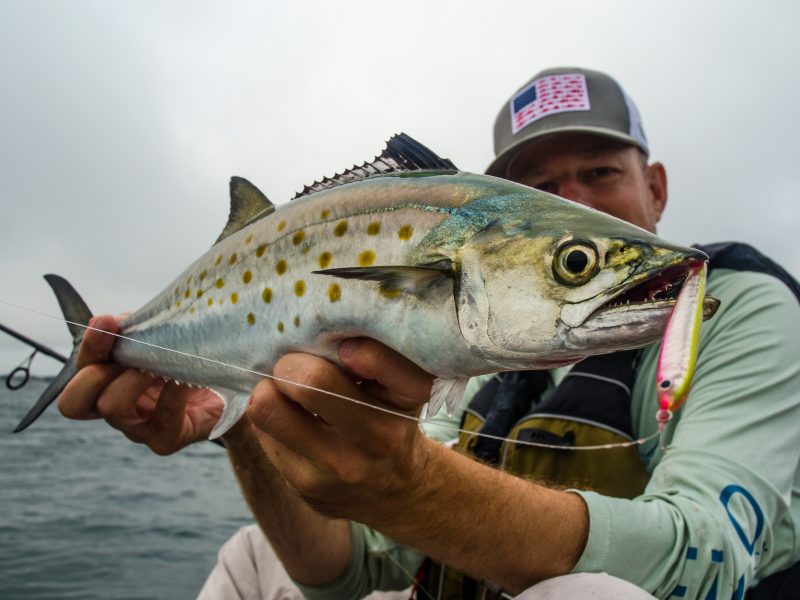 Above: Kevin Blinkoff with a Buzzards Bay Spanish mackerel caught on Monday.

It was this same week last year when we were talking about the early arrival of false albacore on Cape Cod. Once again, the albies, which usually don’t show until around Labor Day, arrived in late August. A large number of fishermen caught albies this week, myself included, tying my personal record for earliest albie (August 25) with last year.


Similar to last year, Spanish mackerel are around in good numbers. They are being caught as bycatch by fishermen targeting albies, but they are abundant enough to target on their own.  They can been seen leaping clear out of the water, and are taking the same lures as albies and bonito. The mackerel seem to be focused on peanut bunker, while the albies I’ve seen have been eating smaller bait, like the baby anchovies that fishermen have dubbed “snot bait” for their resemblance to…well, you know. The albies also eating small silversides, so choose colors accordingly. Pink seems to be working well, but bone, silver, and amber are working as well. Sometimes, bubblegum pink is an excellent choice for triggering a reaction strike from finicky albies.

Canal fishermen are still seeing bonito, reported Cole at Red Top Sporting Goods. He said the bonito are popping up along the entire length of the Canal. Fishermen have been catching them on epoxy-style jigs and standard albie/bonito lures. Cole also mentioned good numbers of stripers, schoolies and slot-sized fish, in the Canal.

Beyond the Canal, the Hooter is the best bet for bonito, reported Jim at Eastman’s Sport and Tackle. Trolling the deep-diving minnow plugs is the best tactic, and Jim said a fair number of albies are being taken out there as well.

Overall, the albie fishing while off to an early start, is still sporadic. Jim said the Vineyard has the best action at the moment, though he’s heard of fish from Hyannis to Woods Hole, and up through Buzzards Bay. As is the case with albie fishing, there seems to be a different hotspot every day.

It’s looking like we might not get a repeat of last year’s wild bonito fishing off the South Side and in Buzzards Bay.  I was hoping for it, since the bonito are running a good bit larger than last year, when, to answer John C. Reilly’s question in Step Brothers, the bonito fish were not big. There’s still time though. Last year, I had my best day of bonito fishing in the kayak on Labor Day weekend.

Striper fishing is pretty slow. There’s plenty of schoolies around on all sides of the Cape. They are popping up under birds in the early mornings and evenings. Larger fish, even from the boats, have been a bit scarce. Captain Mel True of Fishnet Charters found schoolies and small blues fishing outside the Canal this week. Many of the stripers he saw were exhibiting an albie-level of pickiness, refusing all but the smallest epoxy-style jigs. The small blues were considerably less picky.

In addition to the “small blues” many fishermen are talking about, which seem to be 1- to 3-pounders, there’s also been a good number of snapper blues in the harbors. It’s been a few years since snappers have been around in good numbers. These 4- to 7-inch blues are great fun on trout tackle, make good live baits, and are pretty good eating. But, remember, that this year, because bluefish have been deemed overfished, the limit has dropped to three fish. It doesn’t matter if you’re eating them or using them for bait, the limit is three blues per day. The small blues are easy to catch on small spoons or jigs, but, just like their big brothers, will make short work of soft plastics.

On the Vineyard, Sam at Larry’s Tackle said the albie fishing is picking up, but it’s all been a boat game so far. The shore fishermen are eagerly waiting for their shot, but in the meantime, surfcasters have big blues, and a couple bonito, to play with. Sam said the albies are running big—something that Jim at Eastman’s and a few fishermen I’ve talk to have also noted.

According to Neal of Sea Tow Cape and Islands, the albies are running big this year. There have been a couple reports of albies over 15 pounds, and we posted on Instagram a photo of an alleged 20-pound albie taken last week. The Massachusetts state record is 19 pounds, 5 ounces, and the Social Media weigh-masters were quick to chime in, claiming it looked no larger than 15 pounds. Whatever the actual weight of that albie, I can attest that the average size albie on the Cape right now is larger than most years, so check your knots.

While many fishermen are eager for September and the start of the fall run, I know Captain John Clothier of Fish Chatham Charters wouldn’t mind if the fishing he experienced this August never ended. When we spoke on Thursday, he was returning with the 50th bluefin landed on the Shearwater this month. The fish have mostly been large, over 73 inches, John said, but there have been some smaller fish mixed in. On Thursday, John’s fish was 94 inches, and a boat near him caught a 47-incher.

It’s still primarily a live bait game east of Chatham, John said. The fishing cooled off early in the week, the fish were gone John said, but things seemed to be improving as of Thursday.

Other big game around includes some big blue sharks, which Captain Mel True has been catching. When setting out a chum slick around the Cape this time of year, you’re likely to bring in blue sharks, makos, porbeagles, and possibly threshers.

Bottom fishing is slow. Captain Mel True is catching keeper sea bass out of Westport, but combing through many shorts to get them. There’s plenty of scup around in the Harbors for fishermen happy to catch anything. There’s even been some pufferfish and kingfish mixed in.

It has not been a great summer for striper fishing, so with September approaching (and some fall-like weather incoming) we can keep our fingers crossed for a pick up in the bass action.

In the meantime, there’s albies and bonito to soothe our striper woes. Albies seem to be strictly a boat (and kayak) game at the moment, even on the Vineyard, but bonito are giving surf guys a shot in the Canal. The schoolie stripers are providing a scrappy plan b, but they have been pretty picky at times as they focus on small baitfish.  Bring some small metals and teasers for the best shot at either species.

There’s a windy weekend ahead, with strong northeast and strong southwest winds forecasted. That should move things around, and possibly give the albie and striper fishing a shot in arm.