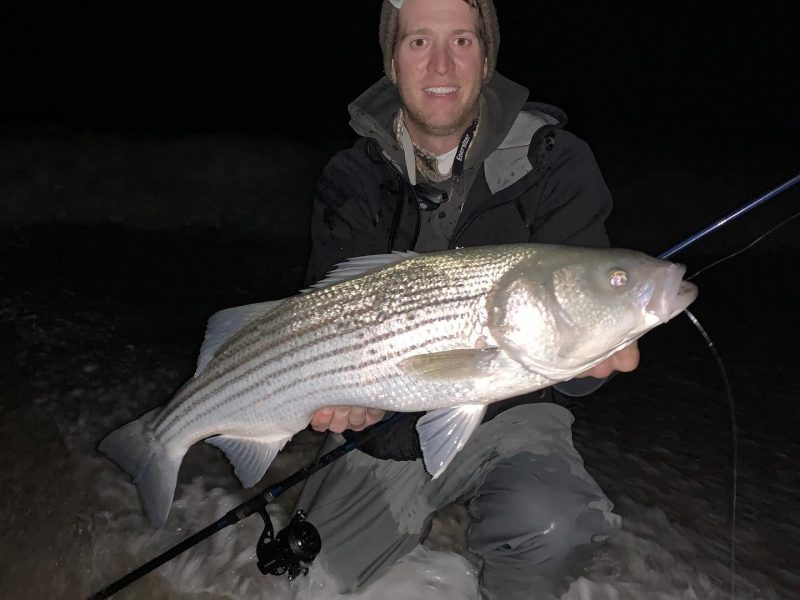 It’s been another good week with more striped bass starting to move into our area as the Raritan and areas north have been experiencing good bass fishing. Let’s hope it continues and they stay inside the 3-mile line for the remainder of the season. Most of the fish have been in the 30 to 50-pound class and have been caught trolling spoons or mojos near the line. Next year could be drastically different as the Atlantic States Marine Fisheries Commission (ASMFC) has officially voted and approved Addendum VI. This would impose a 1 fish 28 to 35-inch limit on striped bass in New Jersey and 18% percent reduction the commercial fishing quotas. On the bottom fishing front, sea bass have been productive in the deeper wrecks and blackfish in some of the shallower spots.

Capt. Bill’s Landing in Point Pleasant Beach reported a bigger push of striped bass just north of the Manasquan Inlet with most of the anglers trolling up bass to 40 pounds on spoons or mojos. The inlet and surrounding beaches have been fair on schoolie striped bass with an occasional keeper. Anglers casting sand-eel impressions have been scoring better on these bass.

Norma K III in Point Pleasant Beach has been working some of the deeper wrecks for porgies and sea bass, but the dogfish have been a big problem at most of the stops. The boat will continue to target porgies, sea bass, and blackfish until the season opens up for more fish on November 16th.

The Gambler out of Point Pleasant Beach reported continued success at the canyons with swordfish, tuna, and mahi being landed. The boat has also been picking at some nice golden tilefish when the bite is slow. Some of the yellowfin tuna have been over 100 pounds along with a few bull mahi. The boat will continue to sail for canyon tuna, and they have added an overnight trip for next week.

The MIMI VI out of Point Pleasant has been busy targeting striped bass and bottom fish depending on the day. The bottom fishing has been pretty good on sea bass, blackfish, and winter flounder and the skipper is looking forward to blackfish opening up to more fish on November 16th. The boat has open dates available for striped bass and tog, but it’s best to check with them.

Jersey Hooker Outfitter in Brick had a nice weigh in of a striped bass close to 35 pounds caught trolling outside of Manasquan Inlet. The bite has started to pickup with more fish starting to trickle in from up north. Blackfishing has been pretty good for anglers working structure in 20 to 40 foot. The tog bite along the Point Pleasant Canal has slowed down as the fish begin to move out with a drop in the temperatures.

Charlie’s Bait & Tackle in Normandy Beach reported some nice striped bass to 40 pounds being trolled up on green and white bunker spoons. Most of the action has been on the 3-mile line and some days the bite has been very good with anglers catching up to a dozen. Tog fishing continues to be good on the inshore wrecks and inlet jetties.

Grumpy’s Bait & Tackle in Seaside Park received good reports of lots ofbunker in the area, but the only issue was the lack of striped bass. There has been some smaller striped bass caught on metals, plugs, and eel-like plastics. The push of colder weather may jump start the bite for the weekend.

Creekside Outfitters in Waretown reported striped bass being trolled from Seaside to Mantoloking on mojos and spoons from 2 to 3 miles out. The shop did receive word of an early morning snag-n-drop bite around Ortley and Lavallette, but it dies out pretty quickly. Tog have been good in the shallower wrecks and jetties with anglers catching them to 9 pounds. The inlet and backwaters of Barnegat Bay have some keeper stripers on both sides of the moving tides.

Reel Reaction Charters out of Waretown and Barnegat Light has been running charters for striped bass and tog out of Barnegat Light. Most of the trips have been catching up to 20 striped bass on live bait and bucktails. The skipper has been finishing the trips with limits of tog up to 9 pounds on green crab.

Fisherman’s Headquarters in Ship Bottom reported some nicer striped bass being landed for anglers trolling the 3-mile line from the Seaside Pipe to Ortley. It seems there is a decent concentration of stripers in the 40-pound range. The bay waters still have a good number of stripers and the area bridges have been very productive on schoolies at night. Tog fishing continues to be off the hook along the jetties. Anglers working the tog jigs have been landing keepers to 7 pounds.

Frank Giacolone from Gabriel Tackle in Brick reported the striper bite continues to be good from spring lake down past Barnegat, a lot of large stripers landed on the troll with mojo’s and spoons getting it done! The head boats were on them again jigging Ava’s with a flow green tails. Striper action at night by the train and 35 bridge in the Manasquan, eel is the bait of choice. Also striper and blues at night and early am before sunrise in the canal and some nice size blackfish being landed during the day, the canal is producing very well. The Mantoloking bridge fishing in the park also has been decent with striper and blues at night at the bridge. Local beaches are picking up and producing some nice size stripers, clam & bunker has been working very well. Metals on a teaser rig is also the way to go. The wrecks and reefs have been producing plenty of porgy, seabass, and blackfish. Reports of bluefin still around.

Brigantine to Sea Isle City reported superb tog fishing off the jetties, especially around Atlantic City. Green crab tipped jigs have been working the best of these fish and some have been in the 8 pound class. Stripers have been cooperating for anglers drifting live spot during the day or live eels in the deeper channels at night.

Jim’s Bait & Tackle in Cape May reported good back bay striped bass fishing in Cape May and Wildwood on soft plastics, poppers, and plugs. Most of these fish are under the 28-inch mark but are fantastic on light tackle. There have been some keepers caught off the beaches and from the boats working some of the jetties. Clam or bunker chunks are also working off the Delaware Bay and Cape May beaches.

The best bet for this weekend will be work the tides for keeper striped bass as most locations have fish over 28 inches. With the colder temperatures set to arrive and the bays cooling faster, the incoming tides will become the best tide for fall striped bass. Boaters will have the additional option of trolling from the 1 to 3-mile line to potentially catch some of the bigger bass. The last I heard it’s been pretty even on Mojo or Spoon action, but it all depends when they decide to bite as some days, they have lockjaw. Sea bass has increased in length and bag limit, but be prepared to fight through dogfish in the 100 to 200 foot wrecks. But with the size of porgies being reported, they may be a good shot for the weekend if the weather cooperates. Tog fishing is probably the best option for a “guaranteed” keeper off the jetties, inlet jetties, and inshore wrecks. Good luck, be safe, and tight lines!