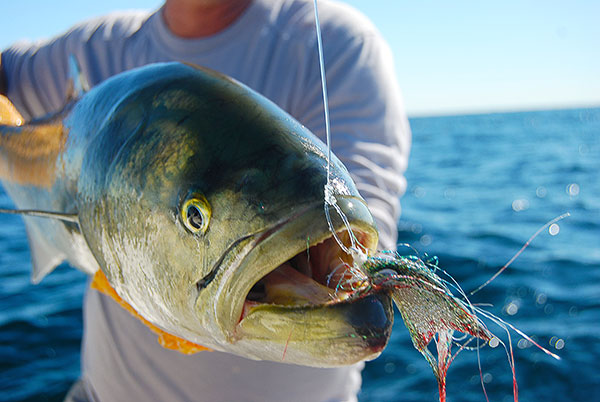 The hardtails are close and should be closer after Dorian moves through; while more and more large striped bass are showing up as the fall run seems to be right around the corner.

Captain Greg, of the Frances Fleet in Narragansett, reported a solid week on the sea bass boat. They have been able to find limits or get very close to it on all the trips this week. Most of the fish have been true jumbos that have been eating just about everything, and there remains a handful of fluke popping up on each trip. The half day trips have come to an end, but the full trips will continue to sail. Be sure to check with the office this weekend, with the impending weather on Friday into Saturday. Captain Matt reported a decent start to the 2019 tuna season. They were able to take fish on the troll, chunks and on the jigs that ranged in size from 28 inches to 100 pounds.

Captain Wade, of Booked Off Charters, told me that he has been sticking with the cod and sea bass for the most part. The striped bass fishing has been hot and cold, but the sea bass and cod has been very steady. Sea bass limits have been common, along with cod in the 12-15 pound range. A few pods of false albacore and bonito are hanging around Point Judith, and that should improve after the blow this weekend. Wade will also likely be running some blackfish trips after this weekend.

Dave, at Ocean State Tackle in Providence, told me that some false albacore have joined the bonito in the Newport and Point Judith areas, with best catches coming around daybreak. A nice push of bluefish are in the Providence River, and there are quite a few small keeper bass mixed in with them. There is a good supply of bunker in the River, which has helped to keep those fish around. Tautog fishing has started to improve on most of the hard structure, including Coddington Cove.

Captain Kelly, of C-Devil II Sportfishing in Narragansett, told me that they had some great striper action this week, with a nice mix of keepers to 45-pounds. Quite a few bluefish have been in the mix, and scup remain easy to find. Sea bass have started to move into deeper water, but they are still plentiful. The sharks seem to have moved further offshore, and there are some signs that the bluefin may be getting closer. They still have some fall inshore and offshore trip openings, but they are going fast. Be sure to book one soon!

Andrew, at Fishin Factory 3 in Middletown told me that the bonito bite has remained steady around Watch Hill and the breachways, but they are starting to get pushed out by the albies around Point Judith. The albies haven’t been confirmed locally just yet, but Andrew is thinking the swell from Dorian will soon change that. If you’re on the hunt for hardtails, be sure to bring some striper gear, as there have been quite a few good bass on top from New London to Watch Hill and around Fishers. Bluefish are on the smaller size, but they are plentiful around the mouth of the river. Montauk and Block are both hot for fluke right now, but that should be winding soon, so get out there!

Black Hall Outfitters reported that the local striped bass fishing has taken an uptick locally, especially on the reefs and shallow rips. Eels, large soft plastics and darter plugs seem to be the most consistent producers. Albies have been reported as close as Westerly by this morning, and they should be in the sound by early next week. The fluke fishing has slowed locally, but scup and sea bass limits remain the norm. The offshore guys are reporting some awesome bull mahi trips, multiple swords and good numbers of yellowfin.

Josh, at Three Belles Outfitters in Niantic, says striped bass fishing has remained consistent through the past week, with more big fish being caught in the daylight hours than in weeks past. Nighttime is still your best bet for a cow. Albies have spread from the Cape into Rhode Island waters, and those who are out there looking are still finding bonito. Bluefish are everywhere, and there are big ones around Saybrook and the race. Scup and sea bass remain consistent locally, while the local fluke fishing has left something to be desired with only a couple weeks left in the season. Don’t forget, TBO will be hosting a seminar by the legendary John Skinner Sat. Sept. 7th at 2:30pm, both seating and standing room are limited.

Captain Greg, from Black Hawk Sportfishingreports that the scup and sea bass fishing remains nothing short of excellent. The for-hire bonus that allows 50 scup and 7 sea bass per person makes it even more attractive. The trips around Block and Montauk have been very successful, and are also seeing some triggers, fluke and a handful of bluefish. The half-day trips have ended for the season, but they will continue to run full day trips every day. 1-2 trips a week will be bluefish trips, while the remainder will be bottom fishing. Be sure to check with Heather from the office for updated scheduling and reservations.

Captain TJ, of Rock and Roll Charters, reports that the bass bite cooled off a bit this week, likely due to the amount of aggressive bluefish that have moved in. That is not necessarily a bad thing though; the bluefishing is stronger than it has been in years, with fast paced, epic blitzes. Scup action is lock and load with easy limits, while sea bassing has slowed a bit, but remains productive.

Mike Roy, of Reel Cast Charters, told me that bonito are also showing up more consistently and there are plenty of schoolies in the mix on topwater plugs. Bigger bass are starting to take topwater plugs at dusk, as well as eels and bunker after the lights go down. A huge pile of smaller bluefish has moved into the area over the past few days and is providing some excellent light tackle action. Murmurs of false albacore are starting, and Mike is anticipating an early albie run; combine that with the amount of small bait, and it should be a good one!

Captain Mike, at Light Bite Charters in Norwalk, told me that not much has changed over the past few weeks out west. Snapper blues are keeping the kids busy, while larger cocktail blues are also abundant. The bass bite is still good but can be spotty at times. Schoolies are pretty common but finding bigger fish has required jigging deeper water or fishing bunker during low light periods. There is a ton of small bait in the area, and Mike is hoping the upcoming storm sends in some hardtails!

We are getting pretty lucky compared to some other regions, when it comes to the effects of Dorian, but Friday and Saturday may still be tricky out in the salt. Luckily, the surge appears to be of short duration, and will likely result in game-on in terms of hardtails next week. Striped bass action has certainly picked up, as the fall run approaches; while bluefishing has been a bit steadier than in years past. Bottom fishermen may be running out of time on the fluke front, but the scup and sea bass aren’t done eating just yet; and don’t forget about blackfish in Rhode Island.