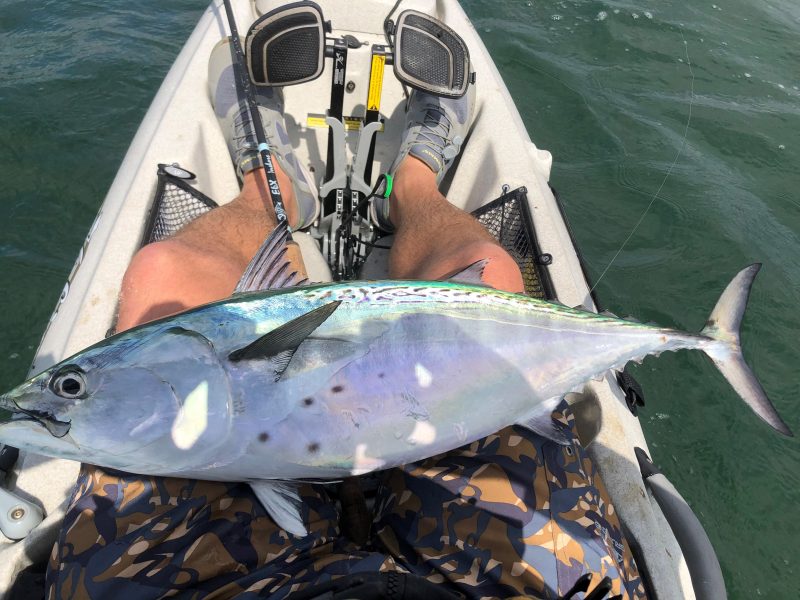 Above: A big albie caught after the winds died down on Saturday.

It may not “officially” be fall yet, but the weather is starting to feel like it, with winds and rains dampening fishing efforts over the past week. But, the fishermen venturing forth in the elements are being rewarded with albies, bonito, and a continued run of Spanish mackerel.

I nabbed a Spanish mack from a south-facing beach this week, and heard reports of boat fishermen catching as many as 7 in a day. The Spanish seem to be feasting on spearing and peanut bunker. The albies seem to be focused on tiny bay anchovies, full-size spearing, and small peanut bunker.

There are still bonito being caught, with many being reported in the Canal this week, said Jeff at Canal Bait and Tackle. The striper fishing in the Canal is improving as well, Jeff said, with fish being caught in the dark. The crew at Red Top reported bass to 40 inches taken in the west end of the Canal, but said that the daytime fishing for bonito is the main attraction in the Big Ditch at the moment.

There was also some good surf fishing for stripers in Chatham, Amy at Sports Port said, with fish to 41 inches caught over the past few days. While fishermen regularly lamented the Canal crowds this summer, the Outer Cape beaches remained nearly untouched by fishermen who have written off this once-great stretch of sand as a seal-littered striper-less wasteland. But if there’s one time to prove this wrong, it’s the fall run. Schools of great stripers still move along the Outer Beach, and fishermen willing to put in the time to intercept them will almost surely have the fish all to themselves.

Many fishermen have been in the throes of giant tuna fever, with steady action happening both off Provincetown and off Chatham. Captain John of Fish Chatham Charters, who brought an 800-pounder to port this week, said boats putting in a full day out there can count on a bite a day. Captain Bobby Rice and the Reel Deal Fleet was on the tuna bite this week landing a number of tuna in the 70- to 80-inch range and losing a monster to a broken hook just outside of harpoon range. The quota will be closing on Saturday, and Friday looks unfishable, so beginning this weekend, captains will have to shift their focus to smaller tuna.

They have been around, reported Captain Matt from Fishy Business Sportfishing, who caught a 65-incher this week.

Depending on who you ask, albie fishing is ranging from red hot to spotty at best. The biggest concentration of albies seems to be moving around, but most fishermen agree that the Cape is fishing better than Martha’s Vineyard and Nantucket at the moment.

On the Vineyard, the team at Larry’s Tackle said there have been regular shots at albies from shore, and that the fishing is improving, but it’s not on fire. There are still more bonito than albies around the island. Small blues and small stripers continue to surround the island.

Nantucket Sound is holding a variety of hardtails, as Evan at Eastman’s Sport and Tackle reported anglers catching king mackerel, Spanish mackerel, bonito, and albies in the same day. Evan also said that Buzzards Bay is loaded with peanut bunker, with blues and some stripers and albies feasting on them.

The Monomoy Rips are still loaded with stripers to 26 inches, but Captain Mort of Fish Tale Sportfishing thinks the big tides brought on by the upcoming full moon will bring big stripers into the rips. Mort also said this is a good time to run up along the beach, looking for bass feeding on sand eels and trying to vertical jig them.

Finding good albie fishing is a matter of covering ground. There are pockets of albie mayhem scattered along the South Side and up through Buzzards Bay. Have a variety of jigs and plastics on hand. There’s been no clear hot lure this year. I had great luck over the weekend with the 1-ounce Game On EXO jig in silver, but when the fishing with that slowed, I continued getting bites with the 4-inch RonZ. Early this week, I had luck throwing the JoeBaggs Resin Jig in green. Its shape makes it easy to get the bait skipping without a blistering retrieve speed, which seemed to be crucial to getting bites on a couple mornings.

Though the striper bite seems quiet, this happens most years, when albies and bluefin arrive in force, and fishermen shift their focus. Stripers may be moving quietly through Cape waters right now. Fish at night, and you could find some great fish that are swimming under the radar of most other anglers.