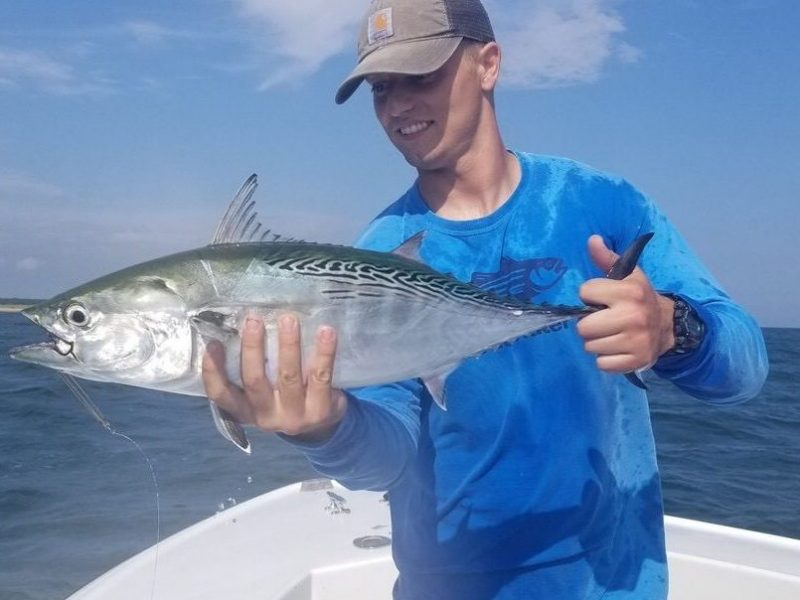 Above: The albies are in the pond. Jonah Olsen with a false albacore caught Thursday, August 22.

August 22 is too early to be talking about albies, but here we are, talking about albies. Rumors began on Tuesday, turned to a few photos on social media by Wednesday, and full-fledged reports by Thursday. Details on locations were scant, but there was word of albies being caught from shore on Martha’s Vineyard, according to John at Larry’s Tackle, and by boat along the eastern South Side, which is typically where the albies make their first showing before sliding west toward Falmouth.

Bonito fishing around the Cape this week was the best I can remember in 10 years of writing this fishing forecast. Some days, it sounded like it didn’t matter if you were off West Falmouth in Buzzards Bay, along the Elizabeth Islands, around the Vineyard, or even casting from the South Side beaches—there were blitzing bonito nearby. How this will change with the apparent arrival of false albacore remains to be seen. The conventional wisdom is that albies outcompete the bonito for the baitfish, pushing them back offshore, but the sheer number of bonito around may provide continued opportunies.

Slender metal jigs, including the host of new casting jigs from Fish Snax, Game On, and JoeBaggs are all producing. Small slender plastics, like the 4-inch RonZ are a favorite here at the office as well.

Striper fishing this week was running cold to lukewarm, depending on where you were fishing. The Canal has been slow, according to Jeff at Canal Bait and Tackle, who said the fishing should pick up big time with the upcoming new moon and strong tides.

Jeff did mention that Cape Cod Bay is full of smallish stripers, with small blues in the mix. There have even been bonito blitzing in Cape Cod Bay, just off the Sandwich beaches, Jeff said.

The Monomoy Rips are fishing well for stripers, said Captain Mort of FishTale Sportfishing, who caught several fish over 40 inches this week by casting and jigging.

Captain John of Fish Chatham Charters said he’s been seeing at least one decent bass a day, mixed in the with the predominantly smaller fish around Monomoy.

There’s some rumbling of better bass around the Elizabeth Islands, said Evan at Eastman’s Sport and Tackle. They’ve been selling a lot of eels to fishermen headed down that way. The crew at Forestdale Bait and Tackle heard similar reports about good striper fishing along the Elizabeths.

Captain Ross of Cape Cod Charter Guys also encountered some good stripers around Cuttyhunk on a trip this week, but his most exciting fishing revolved around big blues.

Ross found a school of bunker that was even thicker than the fog that socked in the Elizabeths on Thursday. Below them, he saw some big flashes, and when he punched a jig through the baitfish, connected with some big bluefish.

Bluefish are all over Buzzards Bay, with some big ones, but most are in that 1- to 3-pound chop-the-soft-plastic-below-the-hook size. Among the blues have been bonito, Spanish mackerel, and even king mackerel.

Amy at Sports Port reported many blues being caught from the South Side beaches. Small in size, but big in fun on light tackle. There are also snapper blues inside the harbors, Amy said. She’d also heard of some bonito being caught from shore, which is pretty unusual in her part of the Cape.

Captain Matt from Fishy Business has been running east of Chatham and catching limits of haddock and good-sized cod. He’s switching over from bass to groundfishing, as that bite improves. He’s also been doing some sharking out there, with some blue sharks showing up to play, but no porbeagles yet.

Bluefin fishing is great, and more recreational sized fish are showing. Captain John from Fish Chatham Charters had a good week, keeping a fish in the 60- to 70-inch range and releasing a giant for three days in a row.

Canyons continue to produce, with big yellowfin making up the bulk up the bite. Blue marlin and swordfish (some very large) are being caught as well, reported Captain Steve from Chaser Offshore Fishing. On the flats, tuna remain a no-show, and Steve believes if they haven’t moved up to the South of the Vineyard grounds by now, there’s a good chance they won’t this season. But, wahoo, white marlin, and mahi are there.

There’s too many options this weekend. Big blues along the Elizabeths, good stripers at Monomoy, tuna, cod, haddock, and sharks east of Chatham, bonito all around the Cape (even off the Outer Cape, according to the Reel Deal Fleet captains), and albies making an early showing.

Chasing down bonito is my pick for this weekend, because who knows how long they’ll be sticking around in these numbers. While fishing for them, you may even stick a bonus albie, Spanish, or king mackerel.