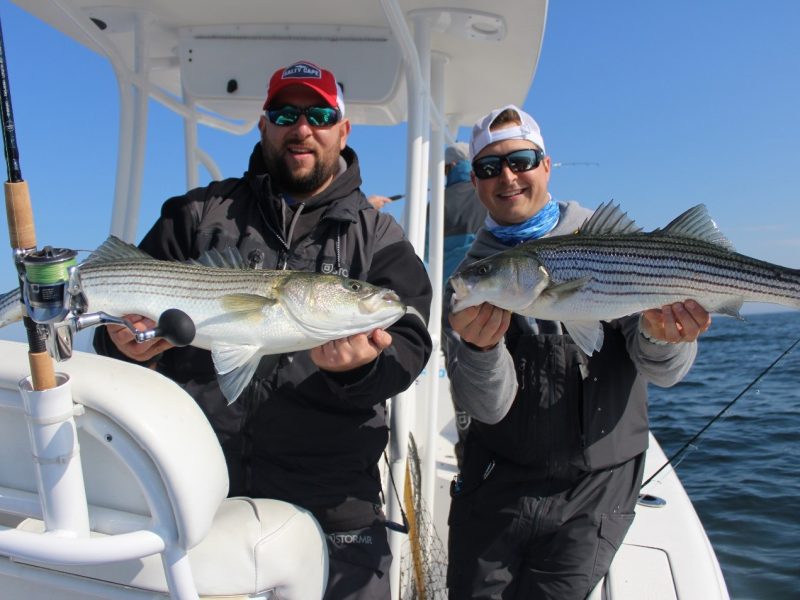 Story and Photos by Patrick O’Donnell

On a sunny but brisk morning in mid-May a crew of five, Evan Russell from YETI Coolers, Joe Gugino from WhyKnot Fishing, Anthony DeiCicchi and myself, headed out of Buzzards Bay with Captain Brian Coombs of Get Tight Sportfishing.  The game plan was straightforward, find hungry (preferably large) striped bass.  If we could get them on the fly, even better.

A week or so earlier, a 64-pound bass was brought to rail not far from where we motored into Buzzards Bay, and so the prospect of locking horns with a behemoth was fresh in all of our minds.  We quickly observed bird activity, not far from the west end of the Canal.  It wasn’t long after we killed the motor that Joe and Anthony found schoolies willing to eat soft plastics and topwater spooks. For Evan, who flew up from Texas, this was his first go at striped bass fishing.  So, while Joe and Anthony had found feeding fish, Coombs made the call to push through the canal to Cape Cod Bay, hoping to find larger schools of feeding fish.

On the bay side, the action ramped up, just as Capt. Coombs predicted.  Diving birds and clear conditions gave way to clear shots at breaking fish and one by one, the crew started locking up. The action went from steady to red hot as the morning wore on.

Double ups turned into triples, and with three bent rods, and men frantically dancing around the boat, it seemed like a good time for Joe to pick up the fly rod.

While Evan and Anthony continued to hook up with keeper-size fish, in the bow of the boat Joe went to work.  Seconds after losing a smaller fish that spit the hook, Joe strip set into a something bigger.  A few seconds later, with the fly line completely out and Joe into his backing, even Anthony stopped casting. Joe was into something big.

With the boat backing us down and Joe keeping steady pressure, everybody on the boat saw colors as the fish came broadside. Joe’s fish on the fly that day, out of 100-plus stripers landed, turned out to be the biggest of trip, at 42 inches.

After high fives and pictures, Capt. Coombs kept us dialed in. Throughout the afternoon, hundreds of bass passed beneath and around the boat as multiple fish followed the flies and plugs in slick calm water back to the boat. With the fishing that hot, by the end of the day everyone on the boat had landed a fish on the fly rod.

As you’d expect, when it came time to turn and run back we were only half serious about putting the rods away and quickly spotted another frenzied feed with fish on herring.  Every cast wiith a top water spook was annihilated.

All in all, the day played out better than any of us would have predicted.  They say never leave fish to find fish, but on this day, that didn’t apply.