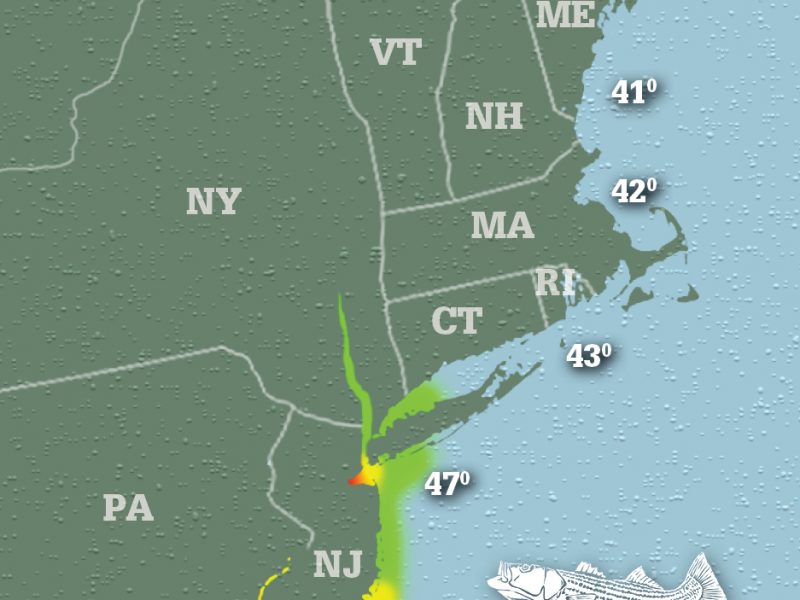 The striper migration has begun! A mild winter has water temperatures much warmer than the same time last year, and striped bass are on the move. A cold start to April has slowed the action and limited the number of anglers getting out to make reports, but we’re still seeing some progress as spawning activity increases in the Chesapeake tributaries and some larger bass are being caught in New Jersey.

The Maryland DNR reports that even though cold temperatures have knocked back spawning activity this week, water temperatures in the Chesapeake remain at about 50° and spawning populations of striped bass are now in all of the major spawning rivers. Last weekend, noticeable spawning began to occur in the Nanticoke, Patuxent, Potomac and Choptank rivers. Anyone near these spawning reaches cannot mistake the smell of fish in the air which is due to fish oils and spawn on the surface of the water. Most often the spawning takes off during an ebbing tide and splashing fish can be seen at the surface. The cold nights that are predicted are not a good situation for striped bass eggs and newly hatched larvae, and many will have a hard time surviving the drop in surface water temperatures. Fortunately there are more striped bass waiting in the rivers and bay for optimum spawning water temperatures of 60° to 64.5°.

Fishermen are reminded that however tempting it might be, to not attempt to practice catch and release for striped bass in the closed spawning reaches. Violations carry stiff fines and license suspensions for recreational fishermen. There are areas such as the Susquehanna Flats, areas in the main stem of the bay and the Potomac River where catch and release is allowed. The Maryland DNR has striped bass recreational fishing maps online showing the different striped bass areas and dates as described in regulations.

Striped bass are migrating into Delaware Bay and heading toward their spawning grounds on the Delaware River.

In North Jersey, high winds have been making for some nasty conditions, but bigger bass in greater numbers are showing in Raritan Bay. Up until last week, most fish were taken from shore, but now the boats are getting in on the action.

Holdover striper fishing has been good in the tidal rivers. The Housatonic remains a hot bed for schoolies, but there have been reports of poachers in the area.  Keep an eye out and dial DEEP Law Enforcement at 860-424-3333 or leave a message on the Turn In Poachers (TIP) line: 800-842-4357. View the Connecticut Fishing Report.

Anglers were predicting that the first sea-lice covered schoolies would have shown up along the Rhode Island coast by now, but the cold weather seems to have set things back. We expect to hear a report of numbers of schoolies at the West Wall in Galilee any day between now and April 15th. View the Rhode Island Fishing Report.

Holdover striped bass have been reported in tidal waters on and off the Cape, along with waves of river herring. Anglers are predicting that the first sea-lice covered schoolies will likely show up in the third or fourth week of April. Cape Cod Fishing Report

Boston Harbor, and particularly the Mystic River, have also given up holdover schoolie stripers and some larger fish are stirring now that river herring are entering the rivers.  Massachusetts Fishing Report